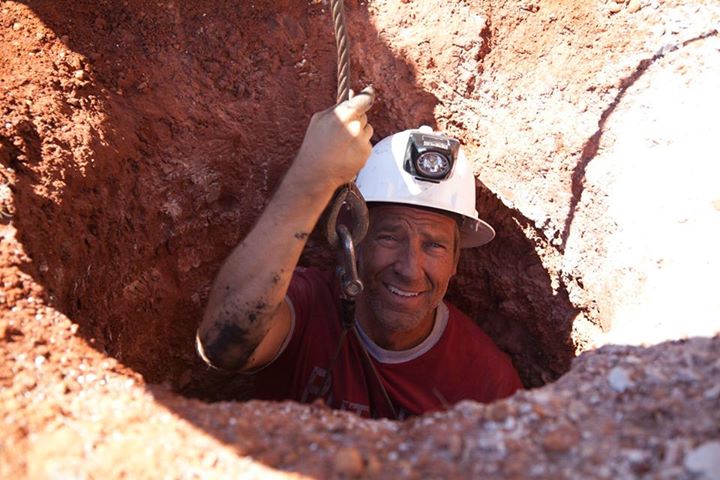 Mike – Last week, I watched you mining for opals in the Australian Outback, and I’ve been having nightmares ever since. I tried to describe to my wife the feeling of claustrophobia that swept over me as I watched you get lowered into that ridiculous hole. She thinks I’m being a baby about it. I’d be grateful if you could explain the process to Wendy, so she can suffer along with me.

Picture a perfectly round hole in the middle of nowhere, six stories deep, no wider than a manhole cover. This is a “prospect shaft,” and you are the prospector.

The job is simple. You sit on a 2×4, and allow yourself to be slowly lowered to the bottom of the shaft. On the way down, you keep an eye out for traces of soapstone. Soapstone often indicates the presence of opal. All you have to do is sit on the 2×4 and look for white lines running through the brown earth.

As you situate yourself on the wooden swing, your misgivings are undeniable. You recall yesterdays helicopter ride over the opal fields, and the sight of many other prospect shafts identical to this one – thousands of open holes dotting the landscape – like the work of some giant gopher run amok. You recall the conversation with the pilot – a good natured Aussie who explained that many of these once empty holes now contain the corpses of kangaroos and other unfortunate creatures that fell to a horrible and untimely demise. He also tells you about a tourist who went for a stroll in the opal fields by himself last year. About how he stumbled and fell headfirst into an open shaft while trying to take a selfie. You made a reference to The Darwin Awards, and the pilot chuckled. But then he told you the tourist was found a week later. Tragically, the fall didn’t kill him; it merely broke his shoulders, elbows, and collarbone. He died of thirst over several days. Alone. Upside down. At the bottom of a 60 foot shaft in the middle of nowhere.

The descent begins, and your regret is now a palpable thing. Just five feet down, the walls start closing in, and the temperature drops with each passing foot. Your helmet rubs and scrapes against the sides, knocking away clumps of loose dirt that bounce off your boots and fall into the abyss.

Twenty feet down, you can think about nothing but the doomed tourist. Seriously – what greater horror could there ever be? To plunge backwards into the dark. To claw madly at the sides on the way down, desperately trying to slow your descent, waiting for and dreading the sudden stop at the bottom. The landing must have been terrible. But the realization of being trapped, with no room to right yourself…it’s too horrible to contemplate.

Thirty feet down, the first traces of soapstone begin to appear. You chip some away, to see if there’s any opal behind it. The light on your helmet flickers in the gloom. You don’t see any opal, and you don’t care. You just want to go back up. But you can’t go up until you go down. All the way down. And so, down you go.

At forty feet, you wonder how dark it is without the headlamp. It’s a stupid thing to wonder, but now it’s in your crawl, and you have to know. You turn the headlamp off – just for a second – but long enough to confirm that you’re not really in a hole at all – you’re in a tomb – your tomb. A tomb you dug for yourself not twenty minutes ago, and stupidly entered for no good reason. The panic creeps up the back of your legs and settles into your gut. You don’t want to scream, so you begin to hum under your breath. A mindless tune that you soon recognize as Mozart’s Requiem.

Forty-five feet down, something wet dribbles on to your arms and helmet. Your crew, who promised not to pee on you, have either broken their word, or wasted some perfectly good bottled water. If you make it out, you resolve to get a new crew. Or quit television. Either way, you swear off holes once and for all.

At fifty feet below the surface, you look down between your dangling feet and see the doomed tourist. He’s vivid in your minds eye -crumpled, conscious, and parched – jammed cruelly into the same space you’re about to occupy. Did he go mad before he died? Did he scream himself hoarse, waiting for rescue? You don’t want to know, but your brain wants answers, and your thoughts are no longer your own.

Sixty feet down, you’re finally on the bottom, and smaller than you’ve ever been. Slowly, you stand, crane your neck, and look to the heavens. But you’re at the wrong end of a powerful telescope, and the tiny blue dot six stories above you offers neither hope nor pity. You’re not a religious person, but you begin to pray. You pray that the rope will hold. You pray the sun will burn your skin once again. You pray silently, but with conviction. Then, apropos of nothing, you remember that fault lines run all through the Outback.

You consider the implications, and quietly shit your pants.

PS. The day after we filmed that segment, a 6.1 magnitude quake hit the southern Outback. The shaking was felt in the opal fields where we had been shooting. I still think about that day, and the miracle of lucky scheduling…