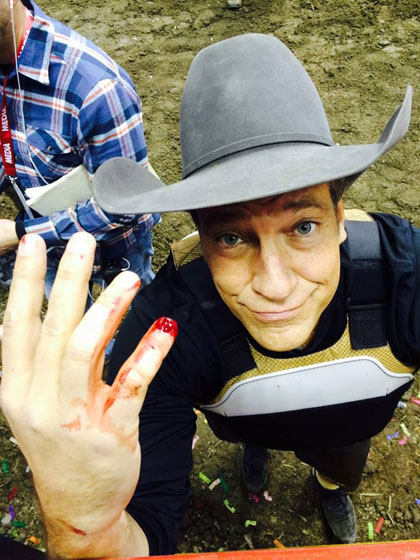 The loading pen had a spring loaded latch. Pull the lever on the spring, and the latch retracts so you can align the gate properly. Let the latch go, and four pounds of tempered steel flies forward at the speed of sound, and locks into place with a resounding “clang.” Simple. Unless of course, you’re loading 65 angry bulls into 65 interlocking pens, all of which contain the aforementioned spring-loaded latch. If that’s the activity in which you find yourself engaged, let me suggest that you bring to the proceedings a heightened level of caution. Especially if you’re being instructed by a professional cowboy.

Cowboys, like crab fisherman and roughnecks, are accustomed to living with high levels of risk. They do not rely upon a safety officer to tell them what’s safe and what isn’t. They understand that being “in compliance” is not the same as being “out of danger,” and that self-preservation starts with personal responsibility. They also assume the brain stem of even the most mentally diminished TV personality is still capable of informing it’s owner that the force of a thing is the product of its mass times its acceleration, (F=MA), and that the physical composition of a four-pound chunk of fast-moving tempered steel is markedly different from the flesh and bone surrounding the tip of a human pinky finger. For these reasons, Cowboys are not likely to say things like, “By the way pardner, as we go about the business of getting 65 angry bulls into 65 interlocking pens, don’t put your fingers on the spot where the latch slams shut.” They just assume you’ll know that already.

The most annoying lessons are the ones we have to keep learning, right? How many times have I jacked myself up because I was so worried about the obvious hazard I forgot about the small one?

A couple years ago, I jumped out of a perfectly good airplane and successfully deployed my own chute. On the way back to my car, I fell down the steps in the parking garage and split my head open. Here, I managed to avoid being trampled and impaled, but succeeded in crushing my finger in a stupid gate. Dumb. Complacent. My bad. 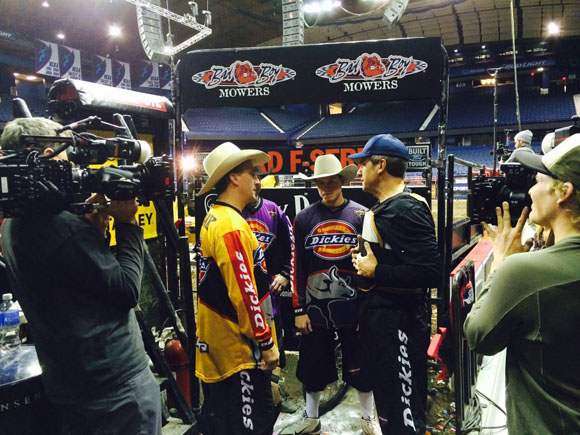 Of course, the real tragedy of suffering a minor injury in the presence of professional bullfighters, is the complete futility of complaining and the total absence of sympathy. When my finger exploded, the cowboy next to me chuckled and said, “Stings, don’t it?”

As the blood dripped down my arm, I turned to Frank, a bad-ass bullfighter with a black eye and swollen face, and said, “Well, there goes another nail.” Frank replied by holding up his own hand, and showing me the empty space where his pinky should have been. With no expression whatsoever, Frank said, “Good luck with your boo-boo. I’ll let you know when my finger grows back.” 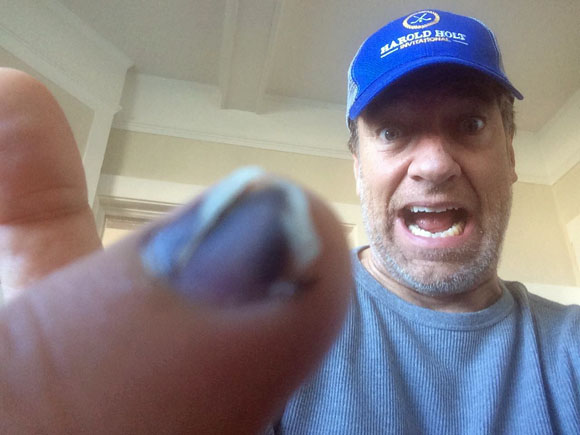 PS. It occurs to me that many of you aren’t cowboys, bullfighters, crab fishermen, or roughnecks. So allow to me whine in earnest, just for a moment…

A few days after my boo-boo, the cracked nail finally stopped oozing fluid and began to heal. Unfortunately, this prevented the blood and pus from exiting naturally, and what followed was the dreaded Subungual Hematoma. Those of you who watch Deadliest Catch are probably familiar with the phenomena. The finger swells to the size of your big toe. The pain is exquisite. There’s nowhere for the fluid to go. So what you do is, you take a straight pin, hold it under a match, and wait for the tip to glow. Then you punch it through the top of your nail, concentrating all the while on keeping you sphincter slammed shut. That’s what I did last night, and the results were as spectacular as they were disgusting. I feel much better now, and my finger once again resembles the digit of homo sapien. But the pain. Shazam! Let’s just say I would have told my inquisitor whatever he wished to know, and prayed for waterboarding.

Anyway, I made a video. Want to see it?