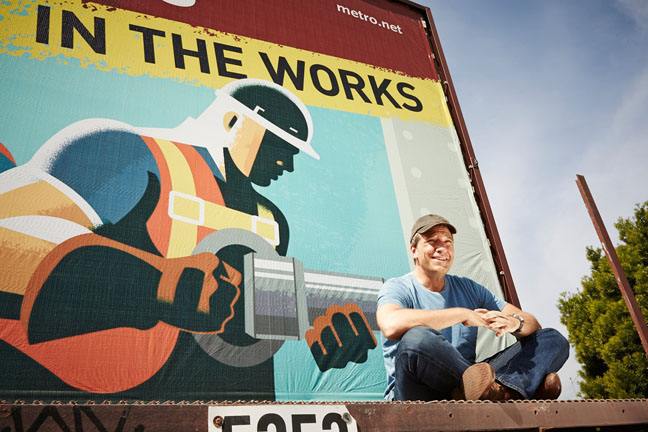 How does someone get into your line of work? I know that the said “line” is probably not a line at all, but I’m genuinely interested in how you managed to become such an “everyman.” If you don’t respond it’s alright, but I follow your page here and I see how involved you are not only in the aspect of fine hard work that takes time and acquired finesse to figure out (That’s what makes it a job) but also in the discussion of what matters, or should matter to us Americans. Keep it up, Mike.

Oftentimes, I’m accused of answering only those posters who take issue with something I’ve said, or simply don’t like me. After some reflection, I’ve concluded this is true, and resolved in the new year to reply to a few friendly questions that burst with encouragement and subtle compliments. Questions like yours. So first of all, thanks.

Secondly – the “everyman” thing is flattering, though I’m no longer sure what it means or if it’s even true. If you mean to say that people trust me or relate to me, that’s high praise indeed. If people trust me, it’s probably because I’m a guy best known for crawling through sewers. Most people with an agenda typically don’t try to advance it while covered with other peoples crap. Beyond that, I think people have come to realize I’m not desperate to win their approval. I’d prefer it if everyone liked me, but not at any cost. Truth is, I’ve Forrest Gumped my way into a position where I can actually get paid to be myself. And that’s about as good as it gets for a guy in my business.

Regarding the way in to my line of work, that’s trickier. My career started with a profound desire to build things. Sadly, it was accompanied by an equally profound lack of natural ability. After washing out of every available shop class in high school, I finally took my grandfather’s advice, and got myself “a different kind of tool box.” At the local community college, I discovered theater, music, poetry, philosophy, and creative writing – for $26 a credit – all of which made more sense to my brain than a square rule or a plumb-bob. Upon graduation though, I checked the want ads and found to my dismay a dearth of openings for a “Philosopher/Poet with a background in performance and creative expression.” So I auditioned for the Baltimore Opera.

I memorized the shortest aria I could find, and somehow made it in. Then I began freelancing in the local television market, and took whatever work I could find – much of which haunts me to this day. I booked an infomercial for Time-Life Music, (Hits of the 70‘s!) and that lead to all sorts of narration work. Before long, I was telling sad stories of gazelles and wildebeests who wandered away from the herd and paid the “ultimate price on the arid reaches of the vast Sarengeti.”

One day, I lost a bet with a friend in the Opera, and wound up auditioning for a job in the nascent home shopping industry. After talking nonstop for eight minutes about the many fine qualities of a #2 pencil, I got my first actual job in television, and went to work on the graveyard shift at The QVC Cable Shopping Channel. I remained there for three years on a kind of double-secret probation, and stayed awake by openly ridiculing the QVC inventory – a bottomless bin of trinkets and collectables that appeared to have been purloined from the midway of some small but condemned carnival.

I was fired three times, justifiably, and rehired, inexplicably. Joan Rivers gave me a break, and over the next ten years, I bummed around New York and Hollywood, impersonating a host for every major network, narrating nature shows, hosting real estate programs, working as an extra, singing the occasional jingle, and proving that Frost had it right when he wrote that “way leads on to way.”

Eventually, I wound up in San Francisco, hosting a local news show for CBS called Evening Magazine. There, I pitched an idea called Somebody’s Gotta Do It – a simple segment dedicated to people who love to work, inspired by my grandfather. After getting permission to proceed from a boss who was about to retire and had nothing ot lose, I went to a local dairy farm and collected the sperm from a giant bull called Hunsucker Commando. I accomplished this in the old-fashioned method. Then, with the minister of a local church, I used the sperm to artificially inseminate a few dozen cows.

The footage aired two nights later during the dinner hour, as The Four Aces sang “Love is a Many Splendored Thing.” The feedback among our several dozen loyal viewers was an equal mix of outrage and delight, which set the course for a few dozen similar segments. Eventually, the new boss determined my taste in stories was “inconsistent with the overarching tenor and tone of Evening Magazine,” and I was invited to “dirty up some other channel.” Which I did. I showed the footage of Hunsucker Commando to Discovery, and just like that, Somebody’s Gotta Do It became Dirty Jobs, and the rest is recent history.

Point is Neal, that’s how someone gets into my line of work, if the someone happens to be me. My story involves home shopping, Grand Opera, and a long series of misadventures in animal husbandry. For others, I suspect the same path would be statistically unlikely, but hey – you never know…and QVC is always hiring. If you’re genuinely interested in a career in television though, my best advice is to get a job as a production assistant on some show – any show. Work for free if you have to. Make yourself indispensable. Be insatiably curious about every aspect of every other position. Work harder than everyone else around you, and smile your face off the whole time. Be humble. And above all, don’t be a dick.

Ten years ago, in Dutch Harbor, Alaska, a production assistant named Timmy introduced himself and brought me a cup of coffee on a very cold afternoon. Then he asked if there was anything he could do for me. I asked if he could scrounge up a wool stocking cap, and he tried to give me the one he was wearing. Six years later, Timmy got a job at Discovery. Not long after that, he became the Executive Producer of Dirty Jobs. And just a few months ago, Tim became the president of The National Geographic Channel.

Anyway, it’s a crooked road Neal, and more often than not, it won’t take you where you want to go. But if you work your butt off, and keep your foot on the gas, it might take you someplace better. Either way, it’s a fun ride.

Good luck, and thanks for the kind words.