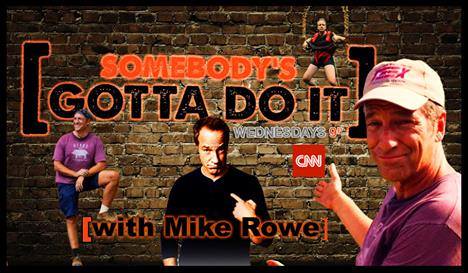 Jamie Dildine – I’m starting to believe that your show got cancelled Mike.

Jim Edwards – Hey! What the hell is Bourdain doing in your time slot?

Kyle Bergen – What happened to your show on CNN? The DVR wont even set it up to record anymore because Somebody’s Gotta Do It isn’t even scheduled.

Gentlemen – Fear not. Somebody’s Gotta Do has not been canceled. In fact, CNN has ordered more. The first eight have aired, and the next season should start airing sometime in the early Spring. To say precisely when however, would be the very definition of random guesswork. Yes Tony – Bourdain was scheduled to air last night in my old time slot. (Shockingly, he was preempted.)

This week, I’m headed to Madison WI. The Dairy Association invited me to give a speech at their annual event, and when I heard it was gonna be 30 below zero I couldn’t say no. The crew is coming along to look for a few stories while I’m there, which means we’re officially taking suggestions. So – if you know anybody in the Madison/Milwaukee area that’s good TV, let me know asap. As always, we’re looking for fun characters who gotta do it. It doesn’t have to be dirty, but it’s gotta be fun. Or weird. And preferably indoors.

UPDATE: The new season of Somebody’s Gotta Do It is set to air April 9th! Stay tuned!