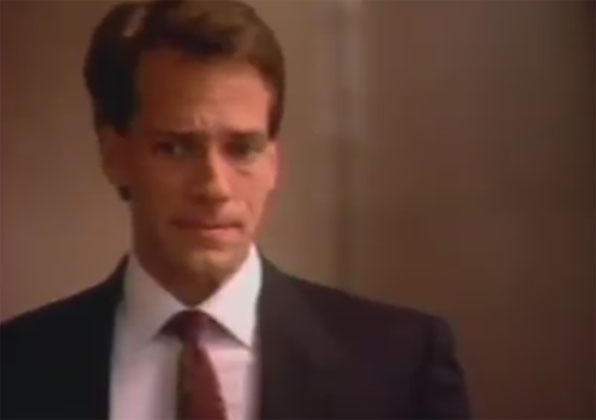 Bob N Diana Snodgrass write,
“Mike, did you find that first commercial that made Mike the Mike he is today?”

Until very recently, I haven’t had a chance to look. But this morning, I got out of bed, stretched, and sneezed so hard I scared young Fred right out of his crate. I sneezed again, and flew backwards into the bed where I’ve remained ever since, enjoying what I can only assume is this God-forsaken flu that’s going around.

Anyway, between the fever and the chills and snot and the sore throat, my activities were limited. But I did root around in the old video vault, and found at long last the commercial to which you refer. Here it is.

It’s called “Dog Chase,” and it was filmed in ’89 or ’90. It’s not the first thing I ever did on camera, but it was my first national spot, and my first chance to work with some serious professionals. The director of photography was a guy called Fred Schuler. Fred shot films like Taxi Driver, Arthur, Fletch, etc. The director was my old friend Alan Charles, who continues to slug away in Baltimore. The dog was named Max, at least in the spot. (In real life, I have no idea what the dog’s name was because the trainer showed up with 4 identical sheepdogs. I chased them all for three days in a row.)

Anyway, there it is.
Mike