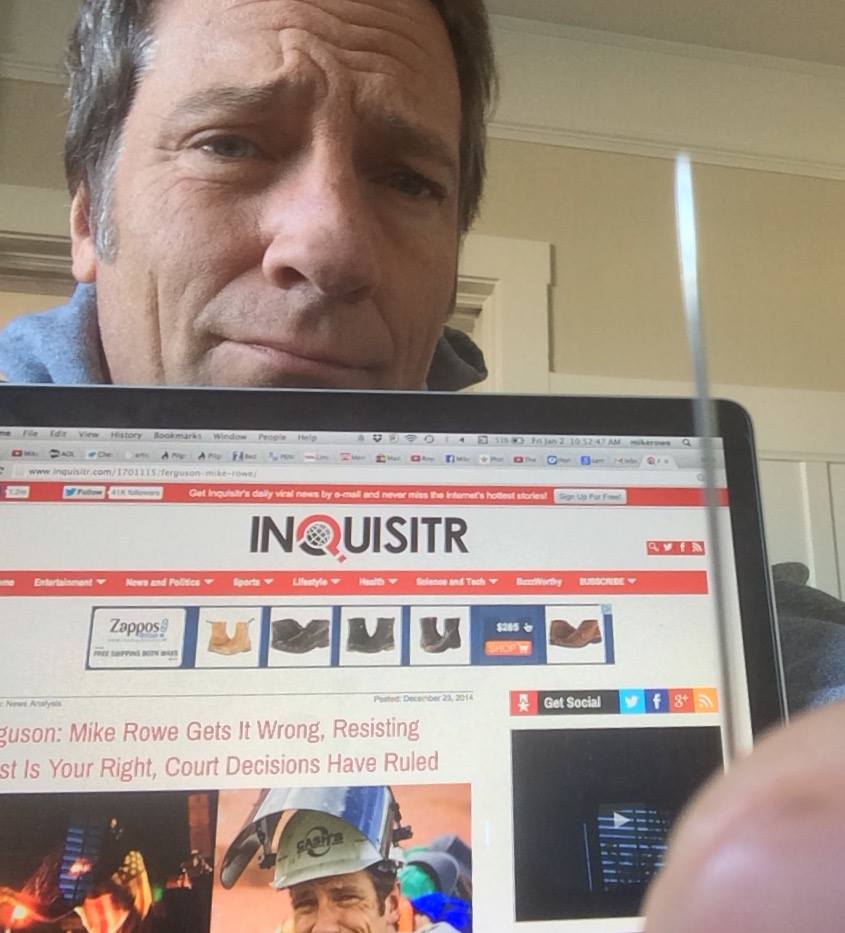 Just before Christmas, I answered a question about Ferguson. In my response, I suggested the fastest way to avoid similar tragedies was to a) root out and condemn bias in law enforcement, and b) discourage people of all races from resisting arrest. I concluded by saying that “resisting arrest was not a right, but a crime.” Shortly thereafter, this headline appeared in The Inquisitr: “FERGUSON – Mike Rowe Gets it Wrong – Resisting Arrest IS your Right – Courts Have Ruled.”

Naturally, I was flattered to have my Facebook post analyzed by The Inquisitr’s legal scholars, so I scrolled down, eager to see the proof of how I screwed up. What I found was a link to a court case from 1889 called John Bad Elk v. US, with the following summation. “The United States Supreme Court has ruled that resisting unlawful arrest is not only a citizen’s right — but that citizens have the right to kill a police officer who is forcefully attempting an unlawful arrest under the same principles of self-defense that govern any assault case.”

I didn’t make this distinction in my original post because, as a rule, I hate to point out the screamingly obvious. But The Inquisitr has proceeded as though I’ve said that very thing. In fact, they’ve dedicated a whole article to disproving something I never said in the first place.

This is called a “straw-man argument,” or a “logical fallacy,” and it’s typical of the demagoguery that surrounds this topic on both sides. Mostly it’s just annoying, but here, it’s actually dangerous, because an “unlawful” arrest could also result from a bad search warrant, the failure to Mirandize, a lack of probable cause, or any number of other procedural mistakes. Which begs an obvious question: Does The Inquisitr really mean to suggest that a suspect has the right to kill a cop, if they believe they’re being arrested “unlawfully?” It’s hard to tell. But if you compare their headline to to their final paragraph, you might detect a whiff of ambiguity.

“[In Florida]…even though a citizen may resist an unlawful arrest, it is NOT legal to resist with violence. Many states have laws that expressly permit citizens to resist unlawful arrests, but many also explicitly prohibit resistance of arrest under circumstances. While Mike Rowe may be right to say that resisting arrest is not good for one’s health, he gets it wrong when he flatly declares resisting arrest “a crime.” The actual answer is, sometimes it is and sometimes it isn’t.”

I have no idea what the goal of an article like this really is, but it sure as hell can’t be the pursuit of clarity. Seriously? “Sometimes it is and sometimes it isn’t?” Tensions are high, New York is a powder keg, and The Inquisitr is arguing on the head of a pin. So I’m gonna double down on my previous claim, and be as clear as the language allows.

No one has the right to resist a lawful arrest, ever.
Doing so is always a crime. Period.

The Inquisitr (can we buy them a vowel?) has done nothing to contradict what I wrote. All they’ve done is claim in their headline that I’m “wrong,” and then remind their readers that “sometimes” it might be OK to kill a cop if the arrest is later determined to be “unlawful.” However, they fail to point out that no one but a judge has the power to make that determination after the fact. They might as well grant us the right to fly, but leave out the part about needing wings.

Michael Brown and Eric Garner died because they got into a confrontation that could have been easily avoided. That’s what made their deaths so tragic. But let’s assume they had the good fortune of being counseled by The Inquisitr a day before their fateful encounters. Let’s assume they were duly informed that “sometimes, resisting arrest is not a crime.” Let’s assume that both men took this advice to heart, and decided to resist precisely as they did in Ferguson and Staten Island. Finally, let’s assume that a court would later evaluate the circumstances, and rule that the cops had been attempting to arrest both men unlawfully. In other words, let’s assume both men had the law, and The Inqiuisitr, firmly on their side.

That was the point of what I first posted. I wasn’t discouraging anyone from waiving their right to self-defense. Nor was I in any way condoning the bias that exists in law enforcement. I was only suggesting that if you have the option – as Brown and Garner clearly did – you should never fight the police in the street. Fight them in a court of law. Your odds are better there, no matter what color you are.