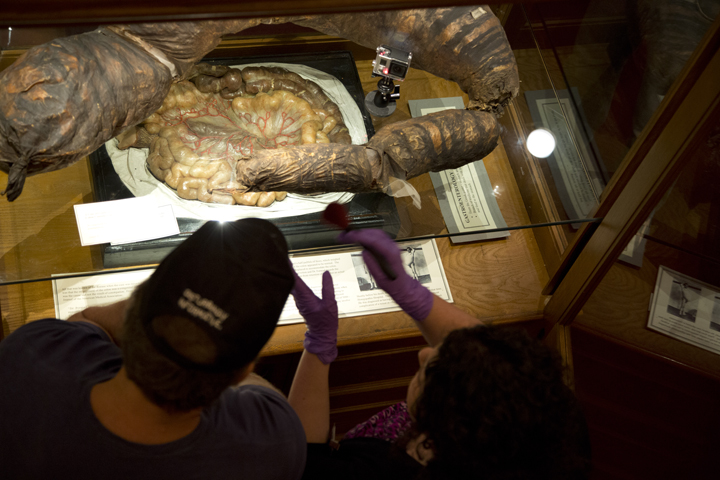 (CNN) — Remember the look on Mike Rowe’s face on CNN’s “Somebody’s Gotta Do It” when he was presented with the world’s largest human colon?

Ew, yes — but like a train wreck — it was hard not to watch.

And how about that episode when Rowe made a “hair flower” at the “world’s only” human hair museum?

What about when he busted a few moves with a marching band?

Mike connected with his fans in a Reddit “Ask Me Anything” online chat, saying, “Why the Mob has such a rich history in garbage-related industries and rendering-related industries is a conversation beyond my pay grade.” During a CNN Facebook Q&A, he talked about his past, saying, “I crashed an audition for the Baltimore Opera. I got in. Then I got hired to sell stuff on QVC in the middle of the night. One thing (led) to another, and I eventually worked my (way) up to the sewer.”

If you missed these and other priceless moments, here’s where you can catch up.

Below, we’ve boiled down some top video from the first season — which wraps up at 9 p.m. ET/PT Wednesday on CNN and CNNgo.

We got a private tour at one of the world’s top collections of medical oddities — Philadelphia’s Mütter Museum.

You have to go to Independence, Missouri, to experience the wonder of Leila’s Hair Museum.

4. Don’t laugh, this is DIFFICULT!

Mike gets schooled by a master marching band leader.

5. In Texas, spitting is a sporting event.

Watch some of the best … as well as Mike.