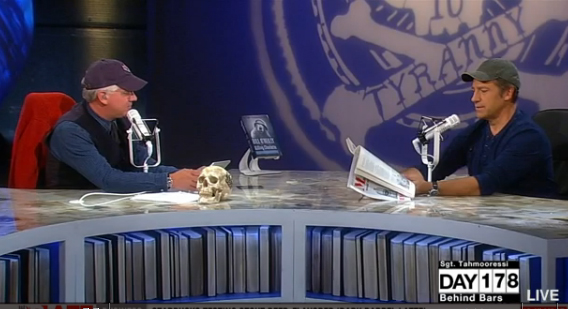 …utterly transparent with the people you truly work for”

Mike appeared on Glenn Beck and discussed topics from fans, to Facebook, to the infamous Walmart ad.  Glenn even asked to Mike to give his “Rowe touch” to an old automobile  ad and he didn’t disappoint.

Mike’s Facebook posts have become the stuff of legends, averaging 400 words and reaching 3,000+ words if the mood strikes. Initially hesitant about the social media he eventually embraced it – why?

“So last time I saw [Glenn], I was in New York. I stuck my foot in with this whole Walmart thing.  All I did was read an ad. I don’t work for them. I just read an ad about reinvigorating of manufacturing through a big investment. So whatever.

“But [Glenn] had me on the radio show to talk about it. And we talked about Facebook a little bit, and I described what was going on. And I went over to Facebook, and I kind of wrote about that, and, you know, I had never paid a lot of attention to Facebook before, but after this, aid few hundred thousand people. Now I got a couple million. And it wouldn’t have happened without you. Because, honestly, what I did was, I went back and I thought, you know something, Facebook, it’s not just — it’s a place where you can be utterly transparent with the people you truly work for.”

“That’s not to say that I’m not as honest as I can be in a newspaper article or on a television show or with a network or any other thing. But, you know, people I think understand that advertising is powerful and executives are powerful. And everybody has their own brand and you got to be a good sport if you want to get along. But in the end it’s really great to have a place where you can talk as candidly as you want. That’s not to say you can’t make trouble if you do it wrong. It’s important to have a place to do that. Right now it’s Facebook. It might be different in a couple of years. I don’t know. Actually, here is one of those places too. I get a little grief when I come on your show. I don’t care. Because, honestly, the people who are most interested in a real conversation will look past it.”