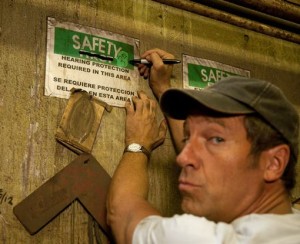 Is worker safety and safety training (beyond the standard OSHA handshake) under your purview? If so, can you tell us a little about that? If not, may I ask why? I appreciate your work and I am not, I must stress NOT, calling you out. I am genuinely curious of your stance.
Respectfully,
Bill Hayward, Ph.D.

Worker safety is a huge issue for me, and one that I got personally involved with about halfway through the Dirty Jobs run. After several seasons of accident-free shoots, my crew and I were suddenly enduring a rash of injuries while shooting the show. Most were minor, and resulted in stitches and broken bones. Several though, were near misses, and damn near deadly. Long story short, my crew and I were becoming complacent, in spite of endless safety briefings and compulsory safety protocols. Eventually, it occurred to me that the whole “Safety First” mentality might be having a counter-intuitive effect. Moreover, it struck me that on-the-job safety, for all it’s critical importance, is never really “first.”

To better make the point, and to stimulate a bigger conversation, I began to publicly suggest that “Safety First” had become a bromide with serious unintended consequences. I affirmatively questioned the underlying logic of the claim, as well as the motivations behind those companies that insisted on telling me that “my safety was their priority.” I then produced a special called “Safety Third,” and used my experiences on Dirty Jobs as examples to support my theory that “being in compliance” was not the same thing as “being out of danger.” This of course, ruffled a great many feathers, and knocked me off OSHA’s official Christmas card list forever. But the show was a success, and lead to lot’s of useful conversations with everyone from NASA to the Teamsters to several large railroad companies. I have endless articles and stories that evolved from Safety Third, but below is the first thing I wrote on line, the night the special first aired back in 2009. It might give you a sense of where I’m coming from. Later perhaps, if you’re really interested, we can discuss the relevance of homeostatic risk and compensatory risk-equilibrium, both of which inform the basic notion of Safety Third.

Tonight’s episode of Dirty Jobs is a special called Safety Third. In it, I look back at some of the bumps and bruises we’ve accumulated in the process of putting this show together, and offer a few observations about the role of Risk in the workplace. The observations made are mine and no one else’s, except where attributed, and reflect nothing but my own experience over the last five years.

expression itself – Safety Third! – has already prompted some to accuse me of deliberately trying to stir up trouble – a charge to which I happily admit. (Few things on television are less interesting than people doing and saying things that no one ever doubts or questions.) However, my main goal in saying Safety Third is not to pick a fight – honest. I genuinely believe that Safety in the workplace is a really important topic – critical in fact – and worth an honest conversation. However, that conversation is often stifled by a rigid set protocols and rote procedures that discourage flexibility and sometimes, common sense.

The points I thought were important to make are all addressed in the wraps, but if history is any indicator, I’ll be hearing from people who object to the overall tenor and tone, or perhaps misunderstand the most important aspect of this show. I don’t mind being disagreed with, but I hate to be misunderstood. So permit me to spell out the most important point right here, and please, feel free to pass it on to those who have concluded something different. Here it is:

The goal of saying Safety Third is no different than saying Safety First. In both cases, the desired outcome is the avoidance of injury or calamity in the course of doing a job.

So then, why question the universal wisdom of Safety First? Why poke the bear? There are several reasons, but here are the most important, repeated here for posterity. (Or at least, for the immediate present.) I hope they help clarify my position.

1. “Safety First” discourages personal responsibility. Is it reasonable to assume that someone would hire you to work in a hazardous environment, and then tell you that nothing is more important to them than your personal safety? Of course not. Difficult and dangerous jobs are accomplished by people who are willing to assume risk – and the assumption of that Risk must come before anything else. Lawyers and insurance adjusters and government agencies have altered that simple equation by perpetuating the belief that your employer might actually care about your safety more than you. That’s dangerous, in my opinion, (even if it’s sometimes true.) Mitigating risk makes good financial sense, in the same way that wearing a harness at 600 feet makes good common sense. But telling an employee that his Safety comes before everything else sends a mixed and somewhat suspicious message. The fact is, companies don’t go out of business when people get hurt. (Well, rarely.) They go out of business when they run out of money. (Bailouts not withstanding.) Wouldn’t it be more honest, (and possibly more effective,) for a boss to say to an employee, “Look Joe, this is a business, and if you get hurt on the job, our insurance premiums will go through the roof. Productivity will suffer. OSHA will fine us or maybe shut us down. Our profit and your personal safety happen to be tied together, but don’t be confused by that coincidence. Our motivation is profit. Your motivation is a paycheck. We’re not your parents and you’re not a child. Let’s be clear about why we’re each here, and let’s not mess that up with a careless and stupid injury.”

3. “Safety First” has become a platitude. For five years, I have seen Safety First banners hanging in factories and construction sites all over the country. Hundreds of

them. At first, it worked. It got my attention, and made me feel more aware. It also made me feel good to think that so many people were concerned for my well-being. However, when you see the same thing day after day, or hear the same message repeatedly, it starts to lose its relevance. It becomes rote. As a mantra, Safety First is effective only to the extent that it gets my attention, and reminds me to stay focused and aware. When it loses that impact, complacency sets in, and complacency – with the possible exception of stupidity and bad luck – is the biggest threat to coming home in one piece. Safety First has become predictable, and for me, those ubiquitous banners are now all but invisible. Safety Third however, gets attention. It stimulates conversation. It demands an explanation. It makes people say, “What the heck are you talking about?” And that, in my opinion, is a good thing.

From what I’ve seen, the key to personal safety is personal responsibility, and it seems to me the most genuine way to foster that in a grown-up employee is to tell them the truth. If Safety were really first, companies would pay their employees to be safe. Of course, they don’t. They pay them to work, and to assume risk. Saying “Safety Third” reminds me of that simple fact. And that keeps my crew and me more focused, and hopefully, more safe.

As always, thanks for watching. And for cryin’ out loud, be careful!