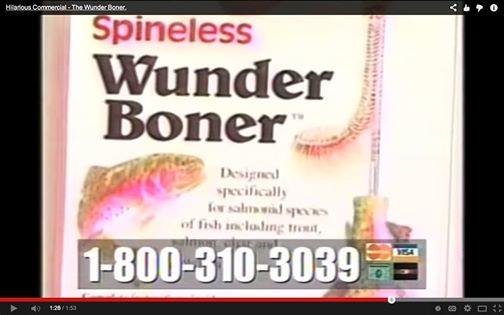 “Hey Mike –
Do you ever disagree with what you are narrating?”

Interesting question, Jason, and one that my imaginary publicist would absolutely forbid me from answering. Consider:

If I say “yes,” the people who pay me to narrate their shows will feel betrayed, and you’ll assume that money is more important to me than personal integrity. If I say “no”, those same people will be pleased, and you’ll assume that my personal rectitude guides me in all professional decisions. Unless of course, you know anything at all about my checkered resume. Consider for instance, the timeless appeal of the Wunder Boner, which I had the honor of introducing to an unsuspecting public twenty years ago.

I started narrating shows and commercials in 1984. I approached the work the same way a plumber might confront a leaking toilet. I didn’t question the nature of the clog, or ponder it’s source. I neither agreed or disagreed with what I found clinging to the paper. I just completed the job as best I could, and moved on to the next one. Consequently, I’ve been paid to narrate for a wide variety of topics, including ghost hunting, ultimate fighting, laxatives, sharks, UFO’s, deep-dish pizzas, wind power, solar power, coal mines, natural gas, Democrats, telekinesis, treasure hunting, Queen Victoria, no-money-down real-estate, dinosaurs, Republicans, timeshares, wildebeests, the industrial military complex, The Peace Corps, paper towels, The Bible, evolution, Bigfoot, hostile-takeovers, astronomy, astrology, cars, trucks, work, play, natural disasters, string-theory, small businesses, polygamy, crab-fishing, airplane repossessions, and perhaps a thousand other programs and products that I may or may not view with an abiding measure of dubiety and personal suspicion.Of course, that was the fun of working as a relatively successful and completely anonymous narrator. No one cared what I thought about the copy I was paid to read. Notoriety changes that. Notoriety makes people wonder about all sorts of things, and justifiably so.

Yesterday, a very disappointed Christian asked me how I can narrate a show like How The Universe Works, which presents the theory of evolution as though it’s an absolute fact. Atheists often wonder how I can narrate parts of the Bible with a straight face. Scientists are aghast that I can still be heard on talking about ghosts. And of course, lots of people assume I narrated that Walmart spot for the money.

Bottom line – if you hear my voice on the air today, the odds are good it’s in association with a show I like, a product I like, a candidate I like, a cause I like, or a favor I owe somebody. But no guarantees. There’s money involved, and that’s always relevant. In reality, there’s only one place where you can be 100% certain that I’m in complete agreement with every single thing I say – and this is it. In fact, that’s why I’m here.

Unless of course, we’re talking about The Wunder Boner. Because some things are more important than money or integrity…