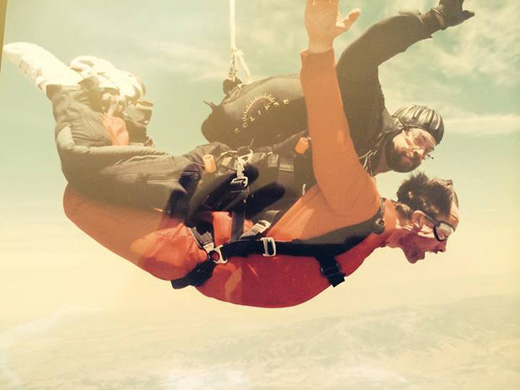 Yesterday was the 70th anniversary of D-Day. I spent most of it shooting a segment with a good-natured hippie in Austin, followed by a flight from Texas to San Francisco. It was hectic, but after a G&T and some complimentary peanuts, I broke out the Kindle and dug into “Ship of Gold,” a really great account of a famous shipwreck in 1857 that has me completely engrossed. But somewhere over El Paso we hit some serious turbulence, and reading no longer became an option. So I looked out the window, and thought about the events that were unfolding seventy years ago. Specifically, I thought about other men in other planes flying low and fast over other countries, enduring turbulence of another variety.

What the 101st and 82nd Airborne did behind Utah Beach was stunningly brave. They secured four causeway exits between St Martin-de-Varreville and Pouppeville. They destroyed a German coastal artillery battery at Saint-Martin-de-Varreville. They captured the barracks and a command post at Mesieres, along with the Douve River Lock and two bridges at La Porte. They took out the highway bridges over at Saint-Come-du-Mont, and secured the entire Douve River valley. And that was just the beginning.

I remember the first time I jumped out of a perfectly good plane for no good reason. I was tethered to a former paratrooper with over 5,000 jumps. I leapt in broad daylight under perfect conditions. I didn’t even have to pull my own cord. And as far as I could tell, no one was shooting at me. Nevertheless, I very nearly shat myself.

Point is, on days like June 6th, I never have the right words to express my gratitude for the bravery and sacrifice made on my behalf by so many people I’ll never meet. Today though – seventy years after the longest day – I found this simple request in my inexcusably large pile of unread correspondence. It has nothing to do with D-Day, but it reminded me of that old description of war – “long periods of interminable boredom punctuated by moments of sheer terror.”

If that adage is true – and by all accounts, it is – we ought to remember our soldiers on days that don’t appear in history books. Along with acts of unthinkable valor, we ought to remember “the long periods of interminable boredom,” and do what we can to lessen the toll that comes from waiting for the next moment of “sheer terror.”

The request is self-explanatory, and the program is fantastic. And June 7th seems an ideal day to bring it to your attention.

Hello – I hope I’m routing this through the right email address on your site. I have a request I’d like to pass along to Mike’s manager, so I’ll try to keep it brief.

I run a literacy 501 (c)3 with a group of West Pointer army officers that we founded while deployed in Iraq. We collect the book lists of people our soldiers respect, post them on our website, and provide the books to our soldiers in different venues across the army. Would Mike consider providing his book list for us to post? All needed for a post is the 5 books he thinks the world can’t live without, and 1 to 2 personal sentences on why each is a “must read.” Our website is Things We Read

Plese see this promo video for our organization:

The book list submission form is attached, and I’d love the opportunity to answer any questions you may have. Please call anytime, and thanks for the chance to touch base.

I’ve read your request and watched your videos. I love what you’re doing, and I’m flattered by your invitation. If course I’ll participate.

Q -Why do you enjoy reading?

A -It’s a cheap and deeply satisfying activity that can be done completely on my own terms. The choices are endless, and the schedule is up to me. Basically, it’s a vacation waiting to be taken without the headaches of logistics, travel, or expense.

Q – Why do you recommend reading to others?

A- Because people who like to read are always more interesting than people who don’t. That’s a fact, and just because I can’t prove it doesn’t mean it’s not true. Also – when strangers realize they’ve each read the same book, they’re no longer strangers. This is important. All shared interests have a way of keeping us from each others throats, but a shared interest in literature goes right to the guts of what makes us civilized.

Q -Where is your favorite place to read?

A– In no particular order – beds, planes, park benches, bars, boats, trains, rooftops, minivans, hot air balloons, and in particular, the old leather chair in my den that faces the Golden Gate Bridge.

Please list 5 books the world can’t live without, and a brief explanation for each.

1. Any of The Travis McGee Mysteries, by John D. McDonald. Travis McGee is my favorite continuing character of all time. He’s a boat bum, philosopher, veteran, and “salvage expert” who specializes in helping people who have been conned or ripped off in every way imaginable. McDonald proves better than anyone that pulp fiction can also be really great literature. They’re twenty-some titles in this series. Each references a color. Start with The Deep Blue Goodbye. Read them in order.

2. A Prayer for Owen Meany, by John Irving. Twenty years ago, I found a dogeared copy that someone had left behind at LAX. I picked it up and started to read it on a flight to Peru. It was the fastest sixteen hours I’ve ever spent on a plane. Great writing, great story, unforgettable character. A few months later, I put it back where I found it. I hope someone else picked it up and did the same.

3. Flashman! by George MacDonald Frasier. The Flashman Chronicles are a series of adventures that involve a soldier who serves in the British Army during the Victorian era. With the exception of the titular character, the books are historically accurate, but outrageously fun because Flashman – who narrates all the adventures – is a shameless coward who somehow winds up getting promoted through the ranks because he’s constantly getting and taking the credit for things he didn’t actually do. There’s no more entertaining or politically incorrect way to learn history than through the eyes of Harry Flashman.

4. Me Talk Pretty One Day, by David Sedaris. The funniest essays by the funniest writer I know of.

5. Cryptonomicon, by Neal Stephenson. I normally avoid the whole techno-geek, sci-fi genre, especially when it comes in 900 pages, but this book absolutely blew me away. Nazis, code-breaking, computers, bit-coin, data-havens, U-Boats, war heroes, and some very dangerous dentists. It’s a big bite, but if you’re not afraid of a commitment, dig in. It’s a lot of fun.

I hope this helps, and I hope you don’t mind me posting this publicly. This initiative is a great idea, and I figure your organization could use all the press it can get. Maybe Facebook will help.

Thanks, and good luck.