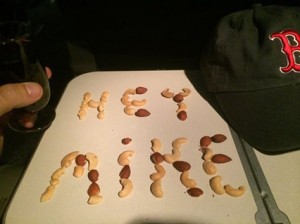 Flying back from Boston. My seat-mate thinks I’m the guy from the Maytag commercials, and I’ve been acting the part. I can only hope the new Maytag Guy is returning the favor on some other flight. Anyway, it seems an ideal time to answer some questions from The Wall in a fit of viewer engagement I like to call, “Hey Mike!”

“Hey Mike! Do you know in the episode dairy cow midwife – which I am watching now – you got a booger hanging from your Snauz?”

Actually Dwayne, that wasn’t a booger. That was a piece of alfalfa that I dipped in a mud-puddle before wedging it carefully into my nostril. I was trying to make myself as relatable as possible. Studies show that vulnerability fosters credibility, and few things are more vulnerable than a man on the TV sporting a booger he doesn’t appear to know about. Farts are also effective at garnering trust and authenticity, as well as zippers that didn’t make it all the way up. Both of which occurred in the same episode. Thank you for noticing.

Hey Mike! Quick question (I hope…), what is your take on STEAM education (putting the Arts into STEM)?

Quick answer – I like it. But remember, the “arts” are not limited to painting, music, theater, puppetry, and interpretive dance. Once upon a time, the “arts” included wood shop, metal shop, auto shop, etc. When I was in high school, shop classes were actually called “The Industrial Arts.” I thought that was pretty cool. They had status, and when it comes to changing perceptions, status matters. So if that’s the association you’re talking about, then absolutely – I vote for turning STEM into STEAM, ASAP.

Hey Mike! – Do you support union tradesmen? And rebuilding unions in the trade?

Yes, I support union tradesmen. I support them for the same reasons I support non-union tradesmen – I admire their work, and I depend on their skill every day. However, the unions agenda is different from my own. Trade unions are focused on the relationship between their members and the companies that pay them. I’m focused on the relationship between individual tradesman and the rest of the country. Obviously, we share some real estate, but our missions are different. You can’t discuss the benefits of a renewed national work ethic if your primary focus is a very small, very specific group of workers.

To your second point, many of the tradespeople I’ve spoken with worry that their unions have lost a measure of public sympathy, and I think they’re right. (I say this as an observer, and a union member for nearly 30 years.) The union agenda is by definition, very narrow. Historically, they’ve implemented that agenda by negotiating with management. But of course, management is not really in charge. Ultimately, it’s the consumer who calls the shots, now more than ever. In the same way that politicians answer to voters, and TV personalities answer to viewers, Big Labor must ultimately make its case to the consumer. On that score, I believe unions have struggled.

Scroll down and check out my last post. It’s a simple meme with a simple caption that says, “If you want to live in a country that builds things, you need to buy things your country builds.” I put it up yesterday without a lot of commentary, because I was curious to see how the sentiment would resonate on it’s own. As of now, it’s got over seven million views, eighty thousand shares, 120,000 likes, and more comments than I can hope to read. Clearly, we love the notion of Buying American. At least, we claim to. But do we actually do it? Obviously…not nearly enough. The question is why? Here’s my take.

Fifty years ago, it was easy to “Buy American.” Not just because our stuff was better than theirs, but because we actually knew the tradesmen making the stuff in question. Back then, our economy was defined by manufacturing, and most people knew someone in the trades. That created a powerful connection in the mind of the consumer, and tied us to the products we bought in a very personal way.

Today, that connection has faded, and the implicit patriotism once associated with “Made in America” now feels kind of manipulative. Personally, I think the claim has become so nuanced that most people are rightly suspicious of the words. I’ve got a pair of boots that say, “Assembled in Mexico by Materials Made in the USA.” That’s nice. I’m wearing a hat that says, “Made in North America.” Really? North America? Like…Quebec? What exactly, am I to do with this information? As a consumer, am I supposed to care?

The truth is, we want it both ways. We want to shop in the global market. We want companies to compete for our business, and we want to pay as little as possible for the highest quality, regardless of where it was made. But we also want to know that every single American worker is safe, fairly paid, properly insured, and well-treated by his or her American employer. We demand this of American companies, even as we purchase goods from foreign competitors who operate under a completely different set of values and priorities. It reminds me of my friends who put their gifted and talented kid into a mainstream public school, and then complained that she wasn’t being adequately challenged.

Point is, it’s not 1975. Can we really expect Americans to purchase whatever Detroit cranks out just because it was built in the USA? Can we really ask millions of families struggling to get by to pay an extra ten bucks for a pair of jeans just because they were manufactured in Missouri? We can try. We have to try. But it’s a very tough sell. Because as consumers, we are no longer impressed by the way things get made. We’re more interested in the way they get bought. That has not only diminished the number of American tradesmen, it’s made those that remain largely invisible.

Last week in DC, I sat next to Sean Garvey, President of the Building Trades in North America. I told Sean, along with a room full of Congressmen, that America needs to get emotionally reconnected with the part of our workforce that keeps the lights on. Unless we make a much more persuasive case for skilled labor and apprenticeship programs, the unions are going to be pushing water uphill. Because in the consumers mind, the Skilled Worker has become an abstraction – a distant drone, laboring away in some soon-to-be-closed factory. Is it any wonder that Trade School enrollments are down? Is it any wonder we have a widening skills gap?

That’s a long way of saying that the trade unions have their work cut out for them. Personally, I don’t believe they’re the cause of what’s fundamentally ailing the country. However, I don’t think they’re the solution either. The price of a thing is a hell of a lot more complicated than the cost of labor. And the realities of modern compliance are way beyond my paygrade. But one things for sure – the most important relationship to our country is not the one between management and labor. It’s the one between the tradesman and the consumer. That’s where the disconnect is most profound. And that’s what has to be fixed.

Anyway, the pilot has just informed me that we have begun our initial descent. Interesting metaphor…