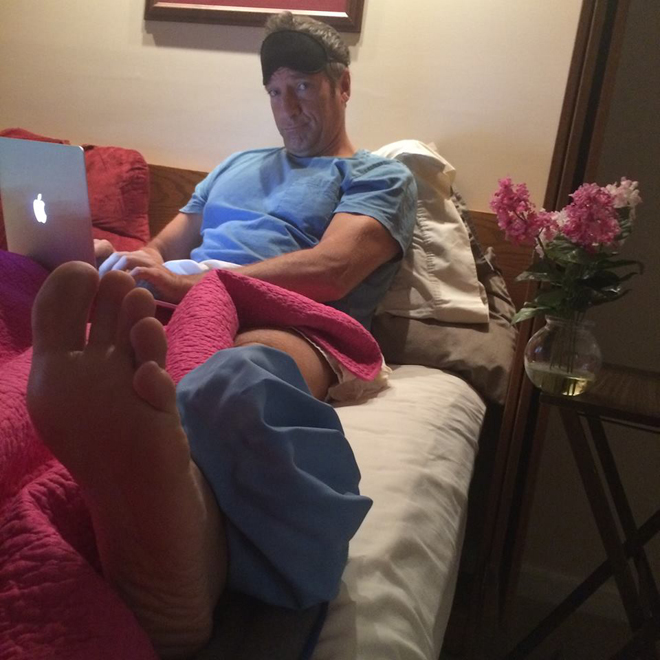 If you’re bored, (and even if you’re not,) pour yourself a drink and scroll through the 20,000 comments that follow my previous post. There you’ll find a study in social anthropology, complete with gallows humor, political invective, satirical splendor, genuine wisdom, shameless quackery, delightful hubris, and perhaps most importantly, a recurring homage to Hillary Clinton’s ankles. It’s more advice than a fella can take, but damn, it’s a great way to pass the time as I lie here in my parents Murphy bed, contemplating my movements over the next few days.

First of all, before I share the official diagnosis, (which many of you have justifiably demanded,) I suppose you deserve to know the details of what happened. Sadly, it doesn’t involve a parachute or a Rugby scrim or some other monument to masculinity. Like most avoidable injuries, this one was born of stupidity and carelessness, leading directly to profound humiliation. The details are these:

I was in a hotel room at The Four Seasons in Baltimore, meeting with some TV producers and professional treasure hunters. We were discussing a project that involves the pending salvage of a famous shipwreck, and the various ways in which I might participate on camera. On the table was a telephone, and conferenced into the meeting were several divers and dare-devils calling in from the waters off the coast of Florida. The conversation was lively, and the more we talked about what was waiting at the bottom of the Atlantic, the more excited we became about the prospects of documenting a really cool project.

At some point in the meeting, I assumed a more relaxed posture, and draped my left leg over the arm of my chair. Slowly, and with no sensation at all, my foot fell asleep. Eventually, it slipped into a coma, and when I stood up to freshen my drink, there was zero sensation from my calf to my toes. No pins and needles, no tingling…nothing. Just a log of lifeless flesh wrapped snuggly in a brown oxford with a robust and heavy tread.

It was the heel that led to my undoing. As I shuffled sideways toward the minibar, my brain assured me that my legs were following their commands per usual. My shoe however, with it’s heavy-duty heel, had gripped the carpet with a most unusual tenacity. This caused my foot to pronate wildly to the left. But my nerve endings, still fast asleep, failed to update the part of my brain responsible for basic locomotion. Thus, my full weight, (evermore considerable), came down on the left side of my left foot, sending my brown oxford, along with my ankle and the rest of me on a trajectory completely inconsistent with my intended destination.

Like most humiliations, this one happened in less than a second, but seemed to unfold over the course of a week. I began to crumple like a cheap card table, flailing as I accelera 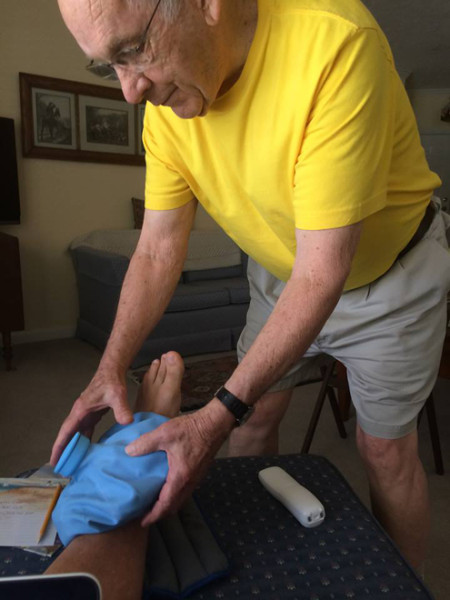 ted across the room, pinwheeling wildly, desperate to regain my balance. After several hops, a tour jete, and something straight out of River Dance, I crashed into the drapes at the far end of the room. I then bounced off the plate glass window and collapsed in a heap, making the kind of sounds most often associated with a young girl in distress. After an awkward pause, those in the room rushed to my aid, as those on the phone were left to wonder what sort of calamity was unfolding far to the north. Not my finest hour.

Anyway, that was yesterday. Today I’m happy to report that my foot is not broken. No – I didn’t go to the doctor, and I didn’t get an X-Ray. Maybe later. If I do, I’ll post it here. But for now, the consensus is clearly in favor of a sprain, (with pregnancy a close second.) So I’ll spend the day elevated, hydrated, medicated, and properly iced. I realize this is counter to much of the excellent advice below, but if I’m going to trust Facebook to name my dog, I might as well give your collective medical diagnosis the gravitas it deserves. Unless of course you’re wrong. In which case, I’m moving to Instagram once and for all.

In the meantime, I am effectively held hostage in my parents apartment, which is, all things considered, rather pleasant. My mother has written a few short stories which I’ve promised to read, and my father is doing a fine impersonation of Florence Nightingale. I’m supposed to be in Texas on Monday, shooting at a place called, appropriately, “Disaster City.”