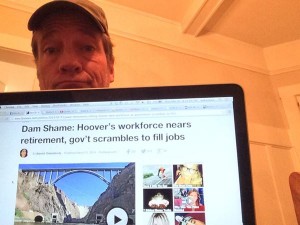 One of the fun but annoying things about being me is the inability to read a simple headline without becoming immediately transported to a specific moment on Dirty Jobs. Here for instance, is an article about the men who maintain the Hoover Dam – one of the greatest engineering and architectural wonders of the modern era. Apparently, a big chunk of these men are about to retire. And guess what? There’s no one to replace them!

This is potentially unfortunate news for the many millions of Americans currently addicted to the electricity provided by The Hoover Dam. For that reason, I suggest you read the attached, or at least watch the video. It’s illuminating.

However – if you’re me – reading this article will mostly remind you of the endless hours you spent wrapped up like a pretzel in the bowels of a giant turbine, lying in a freezing pool of fetid water and congealed grease, trying desperately to remove a single nut from a single bolt in front of an international television audience. It was a simple task that slowly devolved into a monument of frustration and futility that will forever live in my Top 10 on-camera humiliations. Ultimately, my struggles lead to a fit of giggles so profound, I pulled an intercostal and farted in the middle of the scene, a first for both me and Dirty Jobs. Such was my day at The Rocky Reach Hydroelectric Dam on the Columbia River in the town of Wenatchee.

So how is my ignominy in Washington relevant to the situation in Nevada? Well, as I recall, the workers at Rocky Reach were awfully good at what they do, and about the same age as me. But that was five years ago. And five years in the bowels of a turbine takes a toll. So maybe the bosses at Rocky Reach are also feeling the pinch? Maybe the widening skills gap, combined with a crumbling infrastructure and an aging workforce are stalking the banks of the Columbia River, as well as The Colorado?

If so, the people of Washington – like the good folks in Nevada, Arizona, Oregon, and California – should think about the handful of skilled workers they’ll never meet but rely upon every day. The men who tend to the turbines. Because without them, the lights go out. And then? Well, obviously – Dirty Jobs reruns will be impossible to watch.