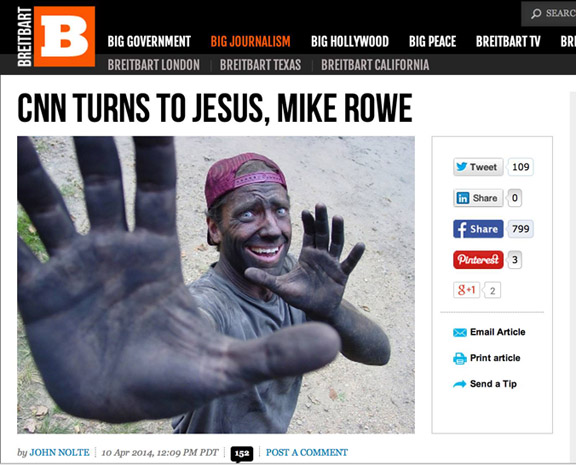 Funny thing is, we have the same agent!

Jeff Zucker, president of left-wing CNN, announced Thursday that Jesus Christ and Mike Rowe will be part of a new CNN line-up, including a revamped primetime. But what is described as a new primetime line-up is really just a soup of ideas brewed by a flailing network executive so that he has something to throw up against a wall in the hopes something will stick.

Low-rated Erin Burnett will remain at the 7 p.m. hour and Anderson Cooper remains at 8 p.m. The 9 p.m. hour, which was once home to low-rated Piers Morgan, will now host a hodgepodge of documentaries and other non-fiction programming. This will include shows hosted by “Dirty Jobs” Mike Rowe, Lisa Ling, and John Walsh of “America’s Most Wanted” fame.

Anthony Bourdain, Zucker’s only real ratings success thus far (that doesn’t involve a whale), will also expand his presence on CNN during this hour.

The 10 p.m. hour will be a return to news with a new show called “CNN Tonight,” which will recap the day’s top stories with rotating anchors.

There is also a new series called “The Jesus Code,” which CNN describes as a series that will “take viewers on a forensic and archaeological journey through the Bible.”

If this is CNN’s attempt to draw in Christian viewers, that is going to be a tough sell for a network that has spent the better part of year blasting the Christian faith as bigoted.

Ever since Zucker came on board, CNN has cynically used “Duck Dynasty’s” Phil Robertson, Arizona’s religious freedom bill, and even opposition to ObamaCare as stand-ins to blast Christians and the Christian faith as hateful and anti-gay. The venomous hostility CNN has shown towards Christians of late has been seething and “The Jesus Code” sounds like a bait-and-switch of “Noah” proportions.

Mike Rowe and John Walsh might, though, offer CNN an opportunity to expand its audience beyond the secular hard-left. Walsh is known for his tough-on-crime stance and his CNN show, “The Hunt with John Walsh,” will stay within the true crime genre.

Rowe has been a beloved champion of the working class since the premiere of his iconic, long-running Discovery Channel hit “Dirty Jobs” back in 2005. His CNN show is called “Somebody’s Gotta Do It” and will pay “tribute to innovators, do-gooders, entrepreneurs, collectors, fanatics – people who simply have to do it.”

The problem for CNN is that with all of these shows rotating in and out, no one is really going to know when anything is on.

CNN is hoping to come back from disastrous ratings, including this last quarter, which was one of the worst in the network’s history. CNN has improved its ratings of late with obsessive and sometimes exploitive coverage of the missing Malaysian airliner. This has come at a cost, though, of what remains of the network’s reputation.