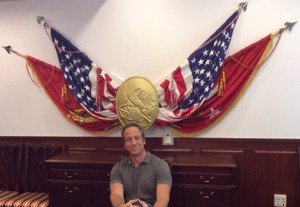 Busy days here in DC. Met some very important bureaucrats at The Department of Defense. Great guys actually, looking for a way to transition more soldiers into skilled occupations. I hope to help. Got a fantastic tour of the Pentagon. Saw the 9/11 Memorial. Stood at the point of impact. Dined in The Secretary of the Navy’s Executive Dining Room. Fancy china. Great Mess. Stopped by to see the Commandant of the Marine Corps. He was out, but I managed to score his official coin. Very cool. Saw Uday Hussien’s gold plated AK-47, hanging on a wall. (He doesn’t need it anymore.) Was introduced to SSGT Archie, a German Shepard that saved over a thousand lives with his nose. Stopped by the Swiss Embassy. Met the Ambassador. Very Swiss. Met some other people. Not necessarily Swiss. Wish I could remember their names. Met some kids with enormous brains. Humbling. Went to the Korean Memorial after dark. Haunting. Had dinner in a Spanish restaurant. Found a fly in my margarita. (Spanish fly? We’ll see.) Checked out the venue for the STEM event. Amazing. Did some press. Shook some hands. Submitted my testimony for another appearance before Congress. Did some more press. Mailed Katie Chen’s photo, as promised. (A promise made is a debt unpaid.) Passed out by my fake fire.
More to follow.