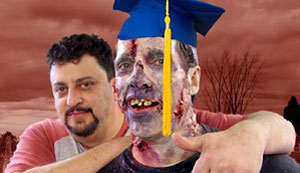 Psychologically, the journey from TV host to brain-dead zombie is a fairly short one. Physically, though, the transformation requires time, skill and a lot of hard work. I learned this firsthand from Toby Sells, a talented special-effects artist who turned me into a soulless corpse for an episode of Dirty Jobs with Mike Rowe back in 2007.

Toby plies his trade in a creepy little studio outside Atlanta. He studied his craft for years as an apprentice, practiced under the supervision of a seasoned professional, and worked his butt off getting very good at what he does. Then the world came to an end over on AMC, the zombie business blew up big time, and Toby got busy breathing new life into the walking dead. Today, he’s still carving out his own pound of flesh from an industry that thousands are dying to get into.

Unfortunately, while millions of legitimate zombies are alive and well, the work ethic and apprentice model that put Toby Sells in business is now on a kind of death watch. And this Halloween, you’ll see the results, as a whole new breed of trick-or-treaters knock on some very familiar doors.

But these “walkers” are looking for more than candy. They want dinner. And breakfast. And brunch. And car payments. And if you don’t answer the door, they won’t leave a bag of burning dog crap on your porch, or wrap your shrubs in toilet paper. They’ll just let themselves in with the spare key, raid your fridge, crash on your couch, and play Call of Duty and Halo until someone turns off the electricity. These are zombies of our own making. And they will scare you shitless.

The facts are pretty simple, even if the numbers are big. A trillion dollars in student loans. Three million available jobs that don’t require a four-year degree. And tens of thousands of unemployed college graduates moving back home, perfectly educated for jobs that no longer exist, and completely untrained for those that do. It’s a nightmare.

But really, how surprised should we be? We’ve gutted the technical trades from our high schools, and consistently portrayed vocational education as something …”alternative.” And yet, we still push a four-year degree like it’s the best path for the most people. The result? A one-size-fits-all approach to education that all but guarantees the dysfunctional relationship with hard work and skilled labor we have today.

mikeroweWORKS is an attempt to turn that around. At its base, it’s a PR campaign for alternative education. By the end of this year, we’ll award around $4 million in “Work-Ethic” scholarships (the mikeroweWORKS Foundation Scholarship Opportunities) to a small number of extraordinary trade schools, beginning with Tulsa Welding School and Midwest Technical Institute. These scholarships are designed to reward two things: the willingness to work hard and the desire to learn a useful trade.

In the near future, you may expect to see me interrupt your favorite TV programs (maybe even your favorite zombie drama) with short messages in support of this program. Here’s an example: MRW / MTI Scholarship Program

Thanks in advance for not fast-forwarding through them, but if you must, you can support our efforts in a variety of other non-traditional ways at mikeroweWORKS.com.

Ultimately, closing the skills gap will only happen when the entire country starts to think differently about the definition of a “good job.” This will come down to parents, teachers, pundits, Scoutmasters, clergy … anyone in a position to influence a kid who’s trying to figure out what he’s good at, or what to do with the rest of her life. We need to change some fundamental stigmas and biases toward hard work and skilled labor, and that won’t be pretty.

But hey – if the zombie trade is booming, maybe there’s hope for those industries that make civilized life possible for the living?

And maybe, with a little luck, we can keep the Walking Dead where they belong – on TV, and out of our refrigerators.