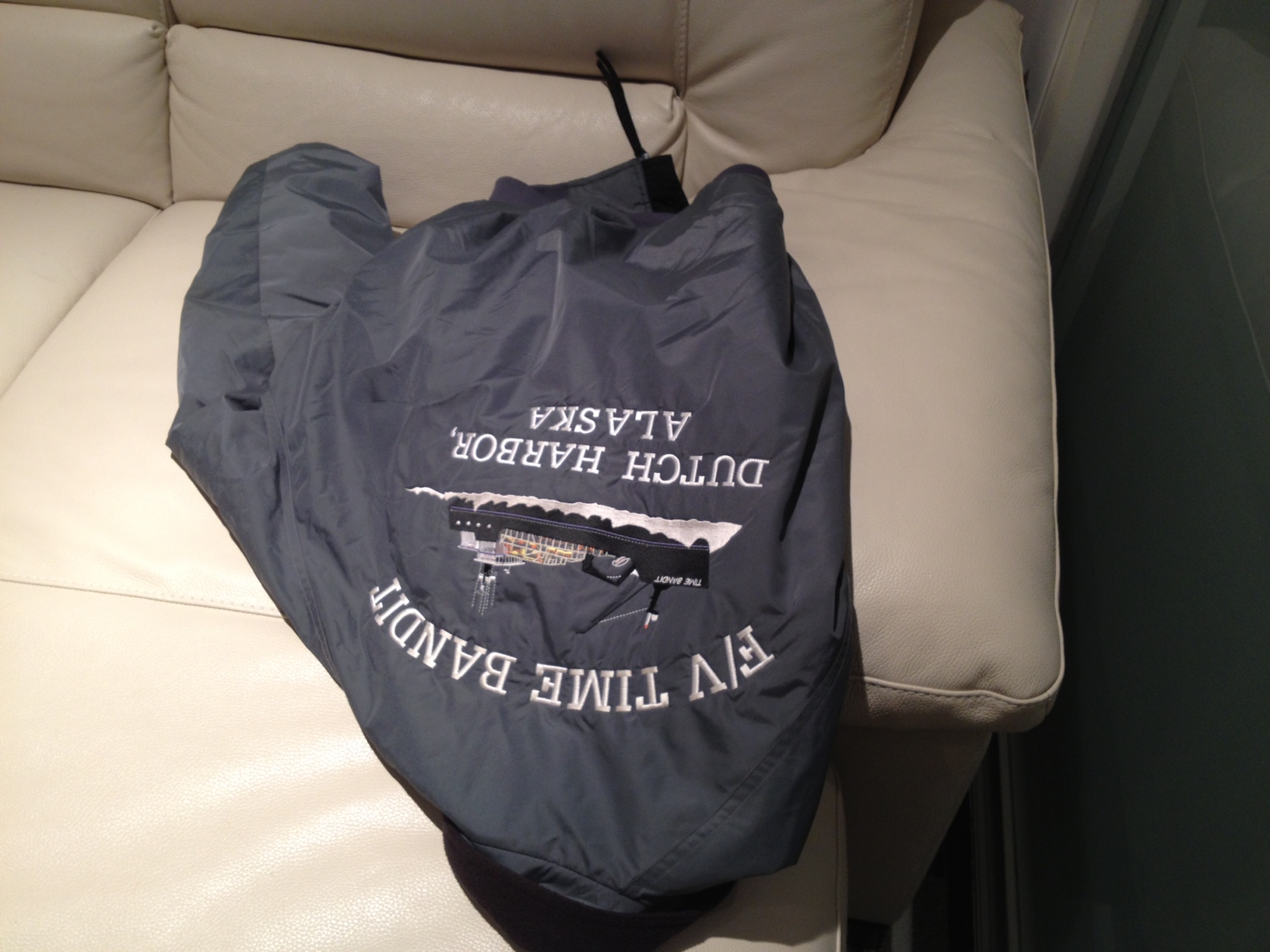 Sometimes my web-mistress will take random photos and ask me to supply a caption. This is a simple and self-explanatory request that I always welcome. However, I admit to being puzzled by this one. For reasons I can’t begin to fathom, Kristen has taken a photo of my Deadliest Catch Time Bandit jacket, hastily thrown on a sofa at the recording studio where I often work.

What possible caption can she anticipate? What portent or hidden meaning might lurk in such a banal image? Is there something in the composition that I’ve missed? Some great, existential truth waiting to be revealed? An underlying message perhaps, in the seemingly random juxtaposition of two everyday items? Or is it merely an indictment of my own aversion to hangers?

The couch is done in what I believe to be white vinyl — ugly, yet surprisingly uncomfortable. Whereas my jacket is stylish, functional, and a joy to own and wear. It is also very personal to me, as evidenced by the unmistakable logo. So maybe Kristen has captured an optical commentary on the collision of human personalities and tastes, personified by two inanimate objects thrown together in a seemingly arbitrary fashion? I mean, someone bought that sofa on purpose, right? Some one actually wanted that hideous couch and might very well think of it in terms no less fond than I ascribe to my Time Bandit jacket. Interesting.

And yet, the Time Bandit itself – the defining element of my jacket – is no more mine than the ghastly davenport on which it rests. And what of the actual jacket? Yes, it is in my possession but does it really belong to me? After all, what do any of us truly possess? Are we not all stewards in the end? Caretakers of a world in constant flux and transition? Could this photo be a rumination on the illusion of ownership?

Or maybe, Kristen has found significance in the inverted attitude of the garment, and combined its seemingly haphazard positioning with a literal interpretation of the words most clearly in view. As we can plainly see, “Time” and “Bandit” are both upside down, and the jacket itself appears tapered at the neck, rather like the mid-point of an hour glass through which the sands of Time slowly drop, robbing us as a Bandit might, of that most precious commodity, measuring out our days and lives in a slow drip of doom and inevitability.

Or maybe it’s just a jacket on a sofa.