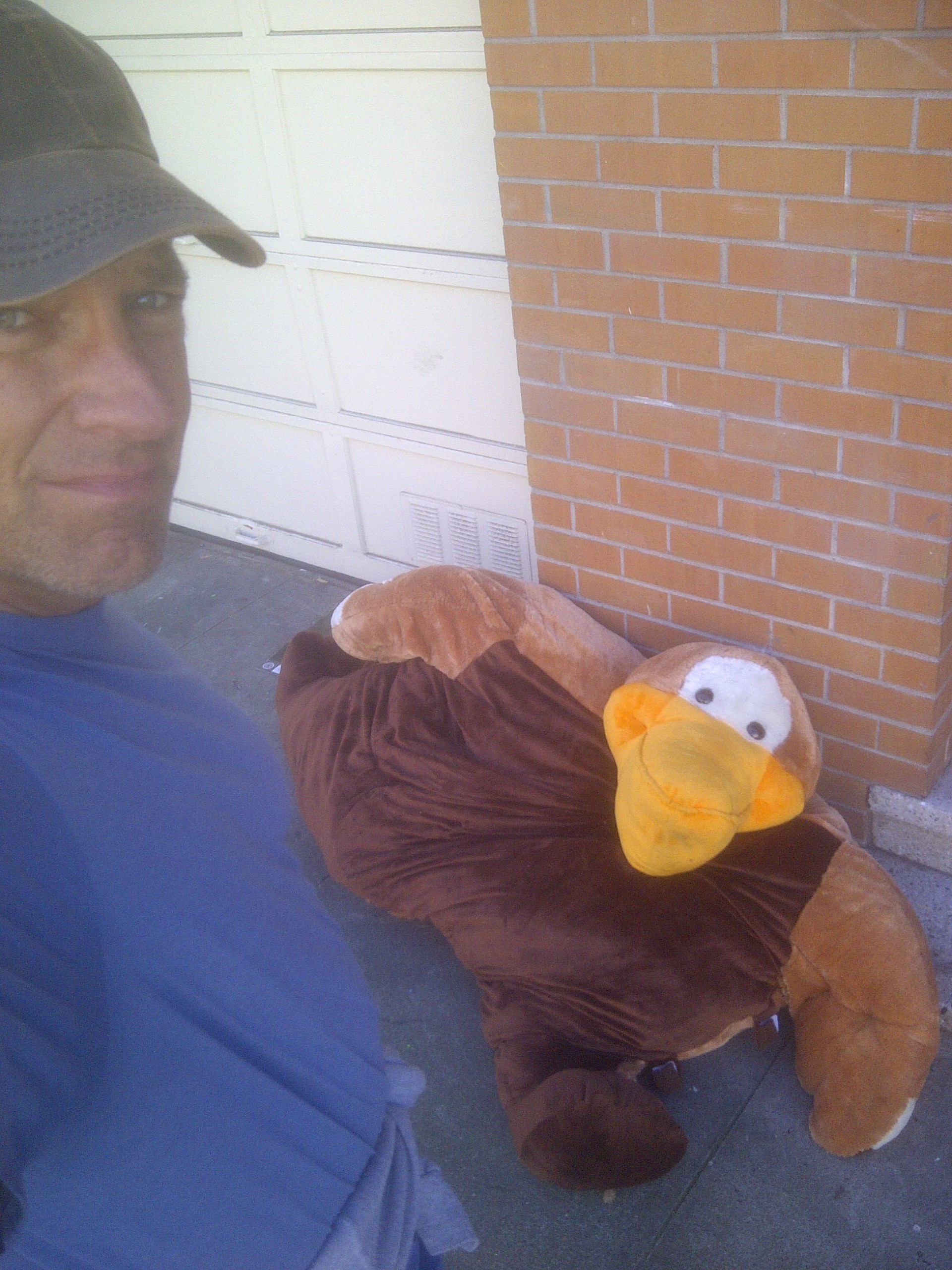 “Mike I hate to break it to you, but this is FACEBOOK. If I wanted to watch YOU TUBE videos I would be subscribing to you there. Try typing something. As soon as I see a link to a video, your losing me and my attention.”

I was trudging home from the gym this morning, yelling into my outdated Blackberry featuring AT&T’s state-of-the-art service, when I caught a flash of color in my peripheral vision. Something large and yellowish was moving very quickly through the air. I could feel the breeze as the thing passed my face, and when it hit the ground it sounded like a box of Cap’n Crunch going through a blender.

I don’t remember jumping, but I must have, since I suddenly found myself on the hood of a parked car, staring down at the corpse of an enormous bird sprawled on the sidewalk below me. It was about the size of a barcalounger and looked a lot like a duck, so much so that I immediately looked to the sky, searching for the broken formation from which the giant fowl might have plunged. Seeing no evidence of any winged migration, I concluded that the duck must have leaped from the roof of the nearest building, choosing to end its life for reasons known only to large and depressed avian.

As my heart rate returned to double digits, I slid from the hood and got a better look at the carcass at my feet. It was not a larger-than-average Anas platyrhynchos, as I had initially assumed, or the slightly less common Anas rupribes. (Both the mallard and the American black duck possess yellow bills, which led to my initial assumption.) No, this was in fact a beanbag chair made to resemble a duck, and as I pondered the cognitive and physical limitations of such a creature, I was forced to consider the possibility of human involvement.

Had someone accidentally dropped the thing from on high? I looked at the windows immediately above the crash site, and noticed that several were open on the fourth floor. However, no one was there looking down in apology, and there was no trace of anyone on the roof. I yelled upward, “Hey! Did somebody lose a duck? Hello??” As the minutes ticked by with no reply, it occurred to me that the duck might have been deliberately jettisoned.

The question then became one of malice. Was I the actual target? Had some prankster run out of water balloons and decided to up the stakes by throwing stuffed animals at random passersby? Or had someone specifically recognized me from Dirty Jobs – a disgruntled animal lover perhaps – looking to avenge years of televised barnyard indignities by assaulting me with an enormous stuffed animal?

I was in no position to conduct an investigation, and thought it best to simply take a photo and move on. And so I have. But I will not forget. And if something untoward should befall me in the future – something involving a beanbag chair or stuffed animal of any type – it will not have been an accident. I leave it to you Toni Maier, to forward this at such a time to the proper authorities. You may tell them to begin their investigation at the corner of Fillmore and Chestnut streets, fourth floor.