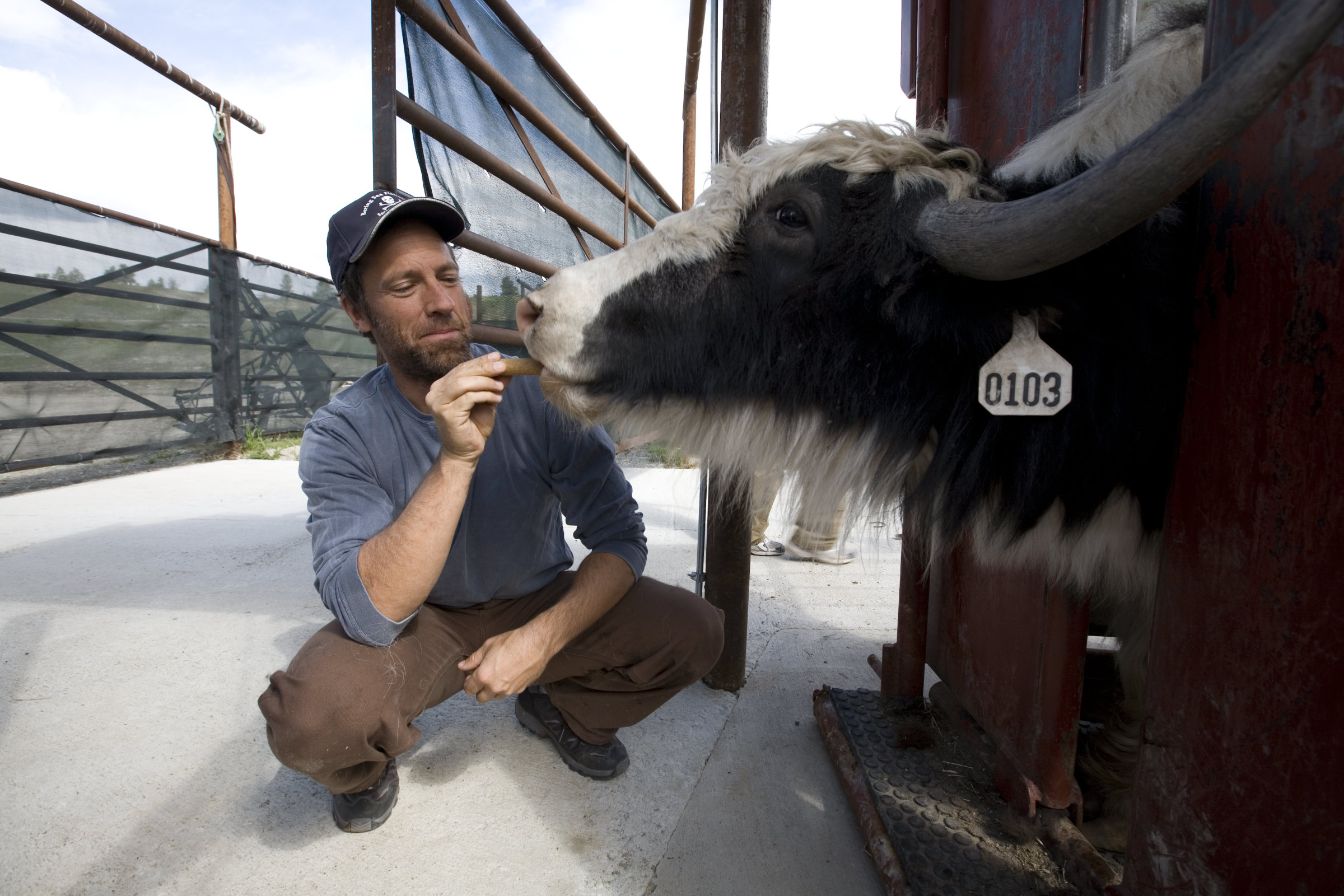 Whenever Dirty Jobs goes off the air for a few months, people start to wonder if the show has been canceled. Rumors begin to swirl, and questions about the show’s future fill my inbox. Over the years it’s been my pleasure to assure anxious fans that Dirty Jobs is coming back for another season. And indeed, we always have. Alas, this year, I’m afraid I cannot dispel the rumors. A few weeks ago, I was officially informed that Dirty Jobs had entered into a new phase. One I like to call, “permanent hiatus.” Or in the more popular industry vernacular, canceled.

My first instinct was to immediately pass the news on to you, but frankly, it’s taken me a few weeks to digest. Dirty Jobs is a very personal show, and it’s difficult for me to imagine a future that does not involve exploding toilets, venomous snakes, misadventures in animal husbandry, and feces from every species. Nevertheless, the future is here, and while it does not appear to contain any more Dirty Jobs, it will almost certainly include another Thanksgiving. So in the spirit of the holiday, I’d like to thank those people most responsible for reinvigorating my erstwhile career, and launching the most honest show in the history of reality TV.

First, to John Hendricks, David Zaslav, and everyone at Discovery. In 1993, with nothing on my resume but an inglorious pink slip from The QVC Cable Shopping Channel, Discovery hired me to host Romantic Escapes. For nearly a year I traveled around the world with an attractive co-host, drinking wine, floating around in hot air balloons, and creating the illusion of romance in 5-start resorts. With Discovery’s continued support, I would eventually work my way up to the sewer, where I’ve happily splashed about for the last eight years. David Z – your support has been invaluable, and the many opportunities that sprung from Dirty Jobs have positively changed my life. Thank you. John H – you are one of the greatest entrepreneurs in modern history. Thanks to your vision, I have Forrest Gumped my way into over 180 countries, and inflicted Dirty Jobs onto a sizeable hunk of unsuspecting humanity. I’m very grateful for that. To you and everyone at Discovery – as well as my good friends who are no longer there – thanks very much.

Second, to Craig Piligian, Eddie Barbini, Ed Rohwedder, and everyone at Pilgrim Films. Back in 2001, I was producing a modest little segment for the CBS affiliate in San Francisco called Somebody’s Gotta Do It. I thought it deserved a bigger audience, but sadly, no one else agreed. In those days, networks were hesitant to spend money on reality shows that didn’t feature cash prizes, convicts, or pets that attacked their owners. But after two years of rejection, Craig P. watched an episode of Somebody’s Gotta Do It, and told me he could sell it. Craig can sell ice to Eskimos, or in this case, a slightly disturbing video of yours truly collecting semen from a friendly bull and artificially inseminating a nearby cow. I don’t know how he did it, but Discovery ordered a pilot and changed the name to Dirty Jobs. The rest is history. Of course, Craig didn’t just sell a show – he sold a genre. Today, over two-dozen separate programs have evolved from Dirty Jobs. Maybe more. The credit for that, (as well as the blame!) belongs to Craig. Thanks Craig, very much.

Third, to my crew. Dave Barsky, Doug Glover, Troy Paff, Chris Jones, Chris Whiteneck, Adam Bradley, Dan Eggiman, Ryan Walsh, Amber McClarin, Marlen Schlawin and half a dozen other masochists who picked up the slack over the years. Making Dirty Jobs was never an actual war, but there were days – many days – that felt a lot like combat. Whether we were dangling from bridges, crawling through mines, swimming with sharks, castrating sheep, transplanting giant cacti, or slowly freezing to death on the Arctic Ocean, we usually made it out in one piece, and we always got what we needed. It’s easy to forget – what with all the laughing and bleeding and vomiting and eighth grade shenanigans – just how excellent each and every one of you is at what you do. Well, I won’t forget. I promise. I’ll remember you always as a band of brothers, and do what I can to one day put the band back together. For now, there’s nothing else to say but thanks. You’re the best.

Fourth, to the hundreds of trusting Americans who invited us into their homes and workplaces – you have always been the true stars of Dirty Jobs. For eight years, you welcomed a reality TV crew into your lives when a first year law student would have advised you bolt the door. (“What’s that? A show called Dirty Jobs wants to highlight our business? They want to shoot in our kitchen? Sure!”) That was an extraordinary act of faith, and I am forever humbled by it. From pig farmers to bridge painters, roughnecks to gandy dancers, your hospitality was exceeded only by your candor and good humor. According to the credits, I am the host of Dirty Jobs, but really, it’s been you guys all along. I’m just the guest, and you have made me feel welcome on 300 different occasions in all 50 states. Dirty Jobs was never intended to become a comprehensive collection of Americans who comprise the finest work ethic on Planet Earth. But thanks to you, it became exactly that. I’m honored to have worked with each and every one of you. Thank you all so much.

Fifth, to the fans. Anyone who’s ever had any good fortune in this fickle business knows who really calls the shots – it’s not the networks or the production companies or the on-air personalities – it’s the people who watch. And the people who watched Dirty Jobs turned out to be far more curious than your average channel surfer. Beyond your sophisticated taste in cable programming, you brought an unprecedented loyalty to a business known for fostering the exact opposite. In the early days, when I was spending 300 nights a year in Motel 6’s and Super 8’s, you guys became my lifeline. Far from home, smelly, and desperate for human contact, we made a genuine connection in virtual space. The questions you posed were not only fun to answer, they were therapeutic. Literally, thousands of posts and tens of thousands of words flew back and forth between us. In truth, it was really you guys who programmed the show. Long after I ran out of ideas for more jobs, it was your suggestions that kept us on the air, and our ongoing dialogue made me realize that Dirty Jobs – in spite of its aggressive simplicity – was endowed with some rather large and universal themes.

When our economy crapped the bed in 2008, Dirty Jobs became weirdly relevant in ways that no one anticipated, especially me. Suddenly, I found myself answering questions about jobs and manufacturing, infrastructure and the skills gap, and a few other topics that I knew little about. But it was you that really took this show to the next level. Thanks to your research and support, we were able to build and launch an online Trade Resource Center, and today, mikeroweWORKS.com continues to make a noisy and compelling case for skilled labor. I think that’s pretty cool. In fact, the mikeroweWORKS Foundation has raised over a million dollars for trade school scholarships and tool stipends and has just announced a partnership with Scholarship America and funded a $250,000 educational grant to provide scholarships for those looking to finish their education in a skilled trade. That’s something you should all be proud of. I know I am, and I know for a fact that it wouldn’t have happened without you. And I’m not just saying that because you’re the boss. So thank you all very, very much.

Finally, I’d like to thank my granddad. Carl Knobel was an electrician by trade, but so much more. He was a role model to me, my brothers, my cousins, my uncles, my Dad, and everyone else who knew him. Like so many of his generation, he worked more than he played, listened more than he spoke, and quietly went about the business of making civilized life possible for the rest of us. Dirty Jobs was inspired by him, and dedicated to millions of other Americans cut from the same cloth – men and women blessed with raw skill, the discipline to hone it, the diligence to apply it, and the willingness to wake up clean and come home dirty. Those attributes may go out of style from time to time, but they will never vanish. They mustn’t. Thanks Pop, very much.

I’m thinking of an old joke about an auctioneer who was trying to get top dollar for George Washington’s famous hatchet. “A true original, ladies and gentlemen. The very one he used to cut down the cherry tree! The handle has only been replaced three times, and the head just twice!”

I can’t say that Dirty Jobs never jumped the shark (since I literally leaped over one in season 2), but I’m proud to say it’s still the same hatchet. The last episode looked pretty much like the first. We didn’t become something we weren’t. We never shared the sewer with Paris Hilton, and we never invited you to “tune in next week for a very special Dirty Jobs.” We stuck to the mission statement. We stayed small. We worked hard. And we had a hell of a good time. It was as they say, a very good run.

As for me, good things are in the works. Not as dirty perhaps, but exciting nevertheless. I’m looking forward to the future, and feeling grateful for the past. As for the present, I’m going to eat the lions share of a large turkey waiting for me in the next room, drink some Champagne, catch up with family, watch the football game, and sleep till Christmas.

Thanks again, and Happy Thanksgiving.