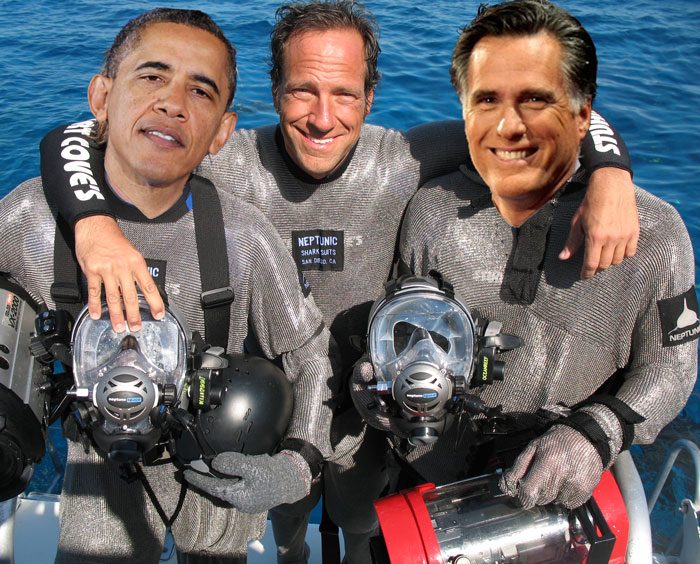 Not long after Dirty Harry started addressing furniture on national television, I began to think seriously about the benefits of keeping my big mouth shut. Alas, it is difficult. Because after three hundred Dirty Jobs and eight years of unintended social anthropology, I’m now afflicted by the possibility that I might have something useful to say. Specifically, I think I’ve stumbled across the solution for closing our country’s Skills Gap, and I find the urge to share my theory irresistible.

I call it my Big Idea for Reinvigorating the Skilled Trades, and I’ve been talking it up wherever the siren song of free press beckons. Last Wednesday, that meant a trip to Ohio, where I shared my Big Idea with Mitt Romney, and managed to confuse half the country in the process, including Ed Shultz over at MSNBC. Ed suggested I am “probably a very nice guy” but clearly on “the wrong stage” and spending time with the “wrong candidate.” He can’t understand why I wasn’t campaigning with President Obama. Other less charitable viewers responded with a flurry of anatomical suggestions, the execution of which I believe to be physically impossible, at least for a man with my limited flexibility. So please, allow me to clarify a few things for Ed, and those who are confused by my recent brush with the (gasp!) Republican Presidential candidate.

A few weeks ago, Governor Romney invited me to participate in a round table conversation with some local CEO’s. The invitation was in response to an open letter from me outlining the aforementioned Big Idea. I’ve written the same letter to lots of people in various positions of influence, including our then newly elected President in 2009. President Obama – distracted no doubt with the business of leading the Free World – never got back to me. Totally understandable. Governor Romney however – in the midst of discussing job issues and preoccupied with the prospect of getting elected – responded right away. Score!

So I bought a ticket and flew to Cleveland to participate in my first ever “Manufacturing Round Table.” I wasn’t sure what to expect, but imagined a thoughtful discussion unfolding between myself and several business leaders, witnessed by a crowd of interested spectators and chronicled by lots of media. Upon landing however, things got a little weird. To my surprise, the local headlines announced that I had “joined the Romney campaign” to “officially endorse” the Governor. Hmm… A quick Google search revealed that several other media outlets had picked up the story as well, and suddenly, my presence in the Buckeye State had become… awkward.

I arrived at the venue and took stock of the situation. Fifteen hundred supporters were crammed onto the factory floor of the American Spring Wire Company. Security was tight, and the press was everywhere. There were big signs, banners and placards, there was cheering and clapping, and a general sense of pandemonium. There was no sign of a table – round or otherwise – and the prospect of an actual discussion was looking increasingly bleak. As I made my way to the stage, that which was obvious to everyone else finally became apparent to me. This was a campaign rally. Super awkward.

In hindsight, it should not have surprised me in the least. When you’re forty days out from a general election in a battleground state – any event is a campaign rally. (Duh.) I quickly realized my expectations for a thoughtful discussion were off the mark and the situation was….let’s just say, uncomfortable. I didn’t want to be rude – I was a guest, after all. But I was not there to publicly endorse him. Obviously, I would need to clear up the whole thing on stage, but Governor Romney beat me to it.

In his opening remarks, the Governor explained that my presence there was intended to be non-partisan and I wasn’t there to endorse anybody. I appreciated that but when it comes to the press, you can’t put the poop back in the goose, and despite his clarification, the blogosphere exploded with speculation that I was angling to be the Secretary of Labor or Ambassador of Dirt or some such craziness. Oy.

The fact is, I went to Ohio to discuss jobs and talk about my Big Idea – namely the importance of a long-term PR Campaign for Skilled Labor as a way of closing the skills gap. That’s all. It’s the same message I’ve been peddling for the last four years, and a PR campaign is not something that either candidate has publicly discussed. Sure, they talk about infrastructure projects and training programs, but those comments are always made in the context of “job creation.”  But closing the Skills Gap is different than “creating jobs.” In fact, it’s the opposite because the Skills Gap does not reflect a lack of opportunity – it reflects a lack of interest. A lack of desire. That’s scary, and worth talking about.

Our country is fundamentally disconnected from hard work and skilled labor. I’ve seen it firsthand in every single state, and the consequences are real. In Alabama, half the skilled workforce is north of fifty, and retiring fast. For every four workers that leave the workforce, only one enters to replace them. Our Skills Gap is a mathematical nightmare, and it’s playing out all over the country. The result? Hundreds of thousands of jobs that companies simply cannot fill. It’s a massive problem that no one talks about, because in most people’s minds a labor shortage can’t exist while unemployment is over 8%. But the facts are clear, and the gap is real.

To close the gap, we need to first change perceptions about the definition of a “good job.” It’s simply unrealistic to expect our kids to get excited about careers that society disparages as “dumb, dirty, or dangerous.” We have to remove the stigmas and stereotypes associated with skilled labor, and stop portraying legitimate opportunities as some sort of “vocational consolation prize.” That means letting go of the absurd belief that a four-year degree is the only sensible way to acquire useful knowledge and have a good career. In other words, we need a PR Campaign for Skilled Labor, not just for the benefit of skilled workers, but for the benefit of people who rely on their work… meaning all of us. What could be more bi-partisan?

The problem of course, was not my message – it was the stage from which I delivered it. Some people are disappointed with me because I wasn’t standing next to President Obama when I made my remarks. Perhaps they are under the impression that I can just call The White House and book myself an appearance whenever it suits me. If so, they overestimate my clout. Which is why I’ll take whatever stage I can get, and keep my personal endorsements to myself. We’ve got to close the Skills Gap, and I’d like to continue helping – regardless of who wins the election.

Anyway, that’s the essence of my Big Idea, and I’m happy to say it’s already working. Here at mrW, we’ve raised over a million dollars for tool stipends and Trade Scholarships. We’ve partnered with the AED Foundation and SkillsUSA on a number of programs, and the results are really encouraging. In particular, I’m excited by our relationship with Go Build Alabama. Go Build is a statewide PR initiative that partnered with mikeroweWORKS several years ago. The goal is to show people what a career in the skilled trades is really all about, and change general perceptions through education, media, and basic PR. It’s working, in a fairly significant way. You can see for yourself here. The Go Build Georgiacampaign is also underway in Georgia, and my hope is to bring the Go Build model to as many other states as possible.

To sum up: the Skills Gap affects us all, and the reason it exists is not a great mystery. It’s simply a reflection of what we value. And what we value in our workforce needs to change. If you share my addiction to paved roads, cheap food, affordable energy, and indoor plumbing, I hope you’ll support that effort. As for actual endorsements though, enough already. I’m endorsing a PR Campaign for Hard Work and Skilled Labor. No matter who wins.