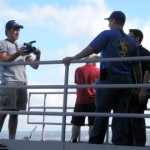 Aloha, from somewhere over the Pacific. As I prepare to re-enter the contiguous 48 for the second time this  month, I can finally begin to see the light at the end of a particularly nasty tunnel of production – one that has succeeded in kicking my butt harder and more consistently than any of its predecessors. Not that I’m complaining, but this last week in Hawaii has confirmed once again that hard work and paradise seem perfectly willing to share  the same lanai.

The boys and I had a jolly time washing windows and making tofu on the main island, along with some misadventures on Kauai later in the week. All good stories, but the one to look for is the window-washing escapade. Without a doubt, the most gut-wrenching high wire act we’ve so far attempted. The men and women who clean the windows at One Waterfront Place on Oahu have no apparent fear of heights, and we were hard-pressed to keep up.  It was a combination of the Mackinac Bridge segment and tar rigging on the Star of India.  Only this time, I was in a bosons chair for nearly five hours, swinging wildly over Honolulu Harbor with a squeegee, a bucket of suds, and a camera strapped to my head. Crazy. I left it cleaner than I found it, but my underpants are a disaster. Kudos to all concerned, especially Troy and Jones, who went far, far above and beyond the call. The footage is amazing.

But I digress. My purpose in checking in from 37,000 feet is to announce another step forward in our continued trajectory toward a useful and practical website, and to thank you all for making it possible. It’s hard to believe that it’s been nearly a year since I first mouthed off in my dining room about the changing definition of a “good job,” but calendars don’t lie, and neither do

es video. (If you ever want to make sure you do something you believe is worth doing, make a video of yourself promising to do the thing in question, and post it on a web site. Trust me, it’s a great motivator.)

Now, as we approach another Labor Day, I’m pleased to report that things are progressing pretty much the way I hoped. Thanks to a lot of hard work from some good friends and loyal partners, we continue to fumble forward in the right direction, and I’m really proud of what’s been accomplished so far. I hope you are too.

The latest improvements and changes to the site are fairly self-evident…poke around and let us know what you think. But remember, the work is never finished, and even though we’ve been referring to this day as the “hard launch,” I must confess that I’m not entirely sure what that means. mrW will continue to evolve, and many more changes are on the horizon.

As we move forward, please know that the moderators have my complete confidence, as well as a mandate to keep this site consistent with its larger mission. In other words, my once firm belief that people should be allowed to post pretty much whatever they wish has gone out the window. I want this site to be accessible in public schools and libraries, and taken seriously by educators, parents, and trades people. Right now, certain types and levels of conversation have made that a challenge. That can’t happen anymore, and the moderators have been instructed to do whatever they deem necessary to keep things civil and cogent. The first amendment, like safety, is important, but not always first.

The Foundation for instance, is far more important, as is the larger notion of a PR Campaign for hard work, which you’ll be hearing more about shortly. (Incidentally, this Twitter business is too much. Though I admit to being a little creeped-out by the whole thing, I’ve been told that after a few dozen random postings, I now have over 9,000 “followers.” If you are among them, I hope you’re not waiting for anything too profound. However, I will continue to use the technology to keep you updated as to all things mrW related.)

As the site continues to evolve and improve, and a new season of Dirty Jobs looms closer, I want to tell you how glad I am to have gone down this road, and how much I appreciate the support expressed here by so many. Our country is in a strange and complicated place right now. People are scared. Unemployment levels are staggering, and the national debt makes my head hurt. In the course of promoting this next round of Dirty Jobs, I’m looking forward to talking about this site, and spreading a message that’s simple, personal, apolitical, and easy to articulate. Distilled and reduced, the message is a familiar one, and goes like this – Get Ready to Get Dirty.

Some of you might recall that I first wrote that sentiment while sitting in one of Dr. Wilkerson’s famous Mud Baths in Calistoga, California, just prior to Season One. I had just written the Dirty Jobs mission statement, and was struggling to come up with a catchy phrase to finish it. Inspiration finally came from a tourist who I overheard inquiring with trepidation from the lobby about the “cleanliness” of the mud. (Tourists can be delightfully stupid, and this one apparently wanted to take a mud bath without getting dirty.) I remember the clerk said, “Sir, it’s a mud bath, and the mud is made from dirt, so it’s not what you might call clean. However, if you really want to get clean, you gotta get dirty first.”

The logic was lost on the gentleman, who seemed put off by the idea of lying in hot, therapeutic mud, and opted instead to go straight to a massage, followed by a hot steam and a shower. To each his own, I suppose. But I found the clerks observation rather insightful, and saw in the tourist an interesting metaphor. How many of us today, want to get straight to clean, without first getting dirty? Indeed, how can we even know what clean means, if we spend our lives avoiding the dirt? Moments later I scribbled out Get Ready to Get Dirty to what I had already written, and three weeks later, it was preserved for posterity in the show’s open.

That was nearly five years ago, and today, I see Get Ready to Get Dirty as something more than a catchy slogan. I see it as a challenge to pay your dues, an appeal to do what needs to be done, and a reminder that short-cuts often lead to long delays. If our country gets itself back on track, we will all need to “Get Ready to Get Dirty,” pronto. Which is why I’ve trademarked the slogan. Look for it soon, on a T-shirt or hat near you.

Well, that’ll have to be all for now. According to the flight attendant, it’s time to turn off anything with an on or off button. He seems quite serious, and is looking at me as I continue to type like a disapproving moderator. So I will close by saying this – I am more convinced than ever that a celebration of Skilled Labor and hard work are absolutely critical to the future of our country. And I’m really happy to have the opportunity to share that opinion with as many people as possible. Thanks again for helping to spread the word.

Now, get ready to get dirty.