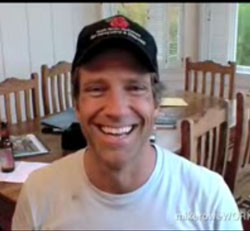 “Ok, Here we go…Hello America, it’s me, Mike Rowe from Dirty Jobs with Mike Rowe here to talk to you on Labor Day at approximately 6:15 in the evening from my “palatial” home in beautiful San Francisco about mikeroweworks.com. I figured Labor Day would be the perfect day to talk to you about this website because it is a site about work. Although I’ve already misspoken – it’s not really a website yet; it will be. By the end of the year mikeroweworks.com will be up and running. Whew, I’ve said it. So now it has to happen. In the meantime, I’ve been talking about this endeavor in the press so I wanted to put up a holding page along with a place for people to register and give some feedback and a 10 minute unscripted, uncharacteristically earnest video, featuring me, describing the purpose of this site in tones best characterized as paternalistic, pedantic, and uncharacteristically sincere.

If you know the show Dirty Jobs with Mike Rowe, you know I try and avoid sentiment whenever possible but the issues here are important and topical and they affect everybody. So I thought if I used some big words and talked in an intimate setting, with gesticulations, you would see that my intentions were in fact sincere. And I mean everything that I’m about to tell you. That’ll be our sign for when I’m super sincere…when I do this [gestures], you’ll know that what I’m saying is completely true. One hand or both, it doesn’t matter.

Here is it: we’ve declared war on work. We’ve declared this civil war on every traditional notion of labor that I know of. And we’ve done it in a lot of different ways over about 30 years or so. We’ve made work into the enemy and I believe that something has to be done to point that out and start a conversation about the casualties of this war because if we don’t then the country’s gonna fall apart. And I mean that in kind of a literal way – the country is going to fall apart if we don’t focus on the jobs necessary to put it back together. And that’s going to involve redefining the definition of what a good job is, and reclaiming a relationship with work that’s something other than dysfunctional.

I have no qualifications to talk about this. And I’m not speaking on behalf of the hard working proletariat out there. I can only tell you that for the last four years I’ve worked as an apprentice on Dirty Jobs. And I’ve traveled to every state, and I’ve worked with plumbers and electricians, and steam fitters and pipe fitters and brick layers and road kill picker uppers and concrete chippers and farmers and fisherman and just regular people doing the kinds of regular jobs that keep our polite society humming along. And they all say the same thing – they all agree that as a culture we’ve demonized dirt and we’ve made work into a thing to avoid. I’m not just talking about laziness or a lack of ambition. I’m talking about really targeting work as a bad thing. And I know that some of you are thinking, “well, big deal, and what’s new, and you know, we’ve always done that to a degree.”. And that might be true, but now these casualties that I’m talking about really are affecting everybody and here they are: declining enrollments in trade schools year after year and a crumbling infrastructure.

That’s what I meant before about the country literally falling apart. Google “crumbling infrastructure”; do a search and read all about it. It’s chilling. Twenty five percent of the bridges in this country are structurally unsound. The American Society of Civil Engineers says we need 1.8 trillion dollars spent by 2010. We’re not even close. And even if we had it, we wouldn’t spend it. And even if we spend it, we don’t have the skilled labor in place to take care of the work. So, (1) we’ve declared war on work: (2) we’ve made it the enemy; (3) our country’s falling apart on account of the Second Law of Thermodynamics which posits that we live in a disintegrating universe; and (4) we no longer encourage our kids to learn a trade. We tell them instead that going to college is the only way to get ahead in life. And I’m all for getting an education, but not at the expense of completely marginalizing the kinds of jobs that built the country.

So, I figure it like this. Hard work needs a PR campaign. Skilled labor needs an advocacy campaign or an awareness campaign. There needs to be a place online where plumbers and electricians and carpenters and tradesmen, people in the construction trades, can get together and have a community; pick each other’s brains. There needs to be a place where parents can come with their kids to look at a case for the trades, and get an understanding that you really can be a plumber in 2008 and make $150,000 a year and raise your kids and coach their Little League and have a balanced sensible life. We’ve got to show plumbers without the big giant butt crack, you know? And we have to reclaim the trades and reclaim the fun and the nobility and the respect and the honor and the dignity that used to come along with our traditional notions of work.

All of those things have been replaced by drudgery. That’s essentially the message that we’ve been sending out. We do it all the time. We do it in Hollywood; we do it in Madison Avenue. We do it in Washington, where we outsource manufacturing jobs it seems like 10,000 a month or so. Silicon Valley has created a new tool chest so we can go about the business of living this new model of work in our homes. We don’t need shovels anymore, we have the microchip. You know, and those are the jobs that we celebrate. Anyhow, that’s what I’ve learned from doing Dirty Jobs over the last four years. I’ve learned it from regular folks who seem to be in on some kind of joke that most of us aren’t. We need to get in on that joke. We need to know what they know and we need a place to know it and to celebrate it and that’s what I want mikeroweworks.com to be.

It’s really the second stage of this PR campaign for work. Dirty Jobs is the first stage – that’s the hard part. All modesty aside; getting a hit show on TV huge? Pain in the ass; very difficult. But it’s there, and people are watching it, and it’s done a lot of good.

But the next stage has to be bigger. And that’s what I want this website to be about. And again, the reason I’ve been talking now for 7 minutes and 15 seconds, (I know it’s a long time) is because I can’t really do it without you. I need you to suggest what it is you think I should do to help make this site all that it can be. And you know, I know that sounds like a dodge or a disclaimer or something, but it really isn’t. Dirty Jobs is on the air because the viewers program it. And basically because the viewers host it as well.

I want that to happen here too. I want… remember Rosie the Riveter? You probably don’t but my Dad and my Grandfather talked about her. She was this icon of work in the Second World War. Big girl, broad shoulders, bandana, stood with her arm like this with the caption that said, “We Can Do It!” It’s that….I mean, the problem is, if that poster was still around today the caption would read “Somebody Else Can Do It Because We Don’t Want To.” No, Rosie the Riveter has retired to some convalescent home with all the other icons of work that used to embody what work was. We don’t have American Icons anymore; we have American Idols. We’re worshipping the wrong stuff and it’s hurting us and it’s creating real problems with the infrastructure and real problems with the trades.

That’s the end of the speech, I promise. I’ve probably destroyed my career and alienated all 15 of my fans but that’s what I want to do with the next couple of years in my life. I want to talk about these issues and I want to try and steer the conversation nationally to gain more awareness. I need help from Main Street, I need help from Wall Street, but right now I really just need your best advice if you have any. Click on that area over there that says, “Do you have any bright ideas?” I haven’t done this in awhile [gestures], but it doesn’t mean I’m not sincere. I just forgot to do it. I forget a lot these days. More and more it seems.

But right now, I’m going to drink that beer, and thank you for listening to this, and invite you to check back from time to time. I’ll update this video as we get a little bit closer to launching the site. Leave me your contact info so I can let you know when this thing is actually up and running. Don’t spare my feelings. If you think I’m out of my mind, let me know. You’re not going to change my mind. But it would be good for me to know. And with any luck, we’ll get this thing off the ground by next Labor Day. Back to work.”