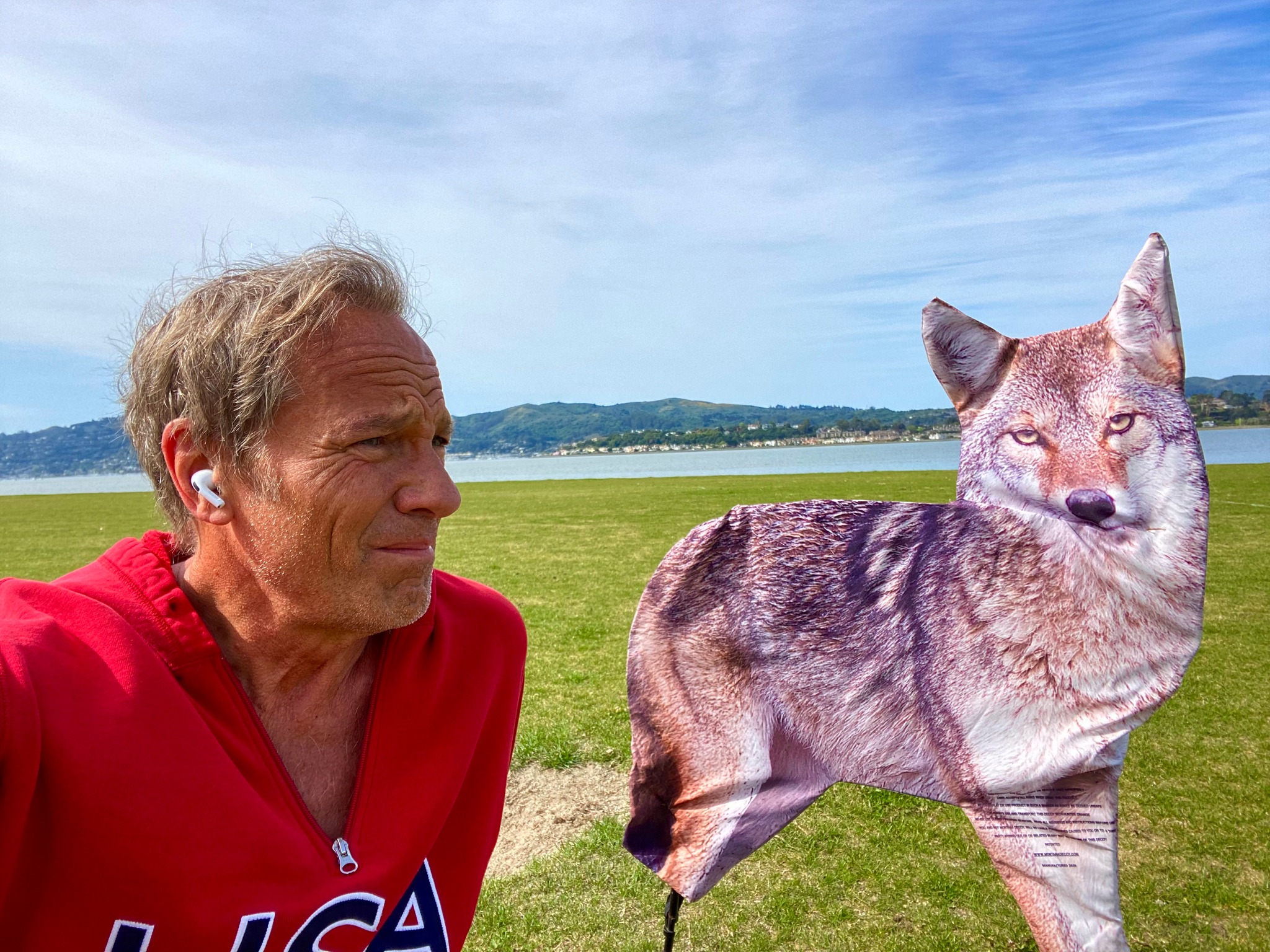 Mike – How’s Freddy? Been a while since we heard from him…

Funny you should ask. The short answer is, “fine.” The longer answer begins with the local geese population, who have identified the neighborhood soccer field as their preferred place to defecate.

Every day, hundreds of them land in the bay and waddle onto the soccer field for the express purpose of relieving themselves on or about mid-field. Unsurprisingly, this has led many of the players to complain. The young girls in particular, object to running up and down a field covered with thousands of little bird turds, which stick to their cleats, fly into their hair, and stain their uniforms when they fall. To combat the problem, community leaders have installed several fake coyotes on and around the field. It appears to have worked, sort of. This morning on my jog, I observed a few dozen geese walking toward the field and stop at the perimeter. The geese observed the fake coyote for several minutes before taking off, falling into formation, flying directly over the field, and crapping from a safe altitude. I can verify this personally, as some of the scat landed on both me and the fake coyote.

It’s rare these days for me to commiserate with a coyote, even a fake one, but there’s a bond that forms quickly between all those who are crapped upon. That bond, however, while strong enough for a selfie, is not as strong as the irony of seeing a fake coyote, given the number of actual coyotes roaming through my neighborhood. The infestation is extraordinary, and the local pet population is on the menu like never before – especially pets of Freddy’s dimensions. Every night around eleven pm, two or three coyotes jump the fence around my house and take a position in the yard, hoping the delicious brown treat who lives there will wander outside for a late-night constitutional.

This coyote problem has been going on for months now, but Freddy has lots of prior experience at being stalked. For years, he’s been doggedly pursued by the red tail hawk population, who, unlike the geese, are less interested in crapping on him, and more interested in tearing him to pieces and eating him alive. This happened to a neighbor’s dog several years ago, a twenty-pound Havanese who put up a good fight but was no match for the talons and beak of two hungry hawks. Today, whenever we go for a walk, there are several hawks circling above us, waiting for an opportunity to swoop. There have been several near misses, but we’ve become accustomed to the danger from above. The coyotes, however, are another matter, and pose a more pressing and probably threat.

Every day on the Nextdoor app, there’s another story about someone’s pet that’s been turned into coyote food. I just read about a woman who found the intestines of her Maltese stacked up on her porch steps, along with a few other organs the coyote left behind. “At least we have something to bury,” she wrote. This past Easter, one of my neighbors got bunnies for their kids. Last week, a coyote got into the hutch, and the aftermath looked like the final reel of Carrie. Red fur was everywhere, along with entrails and eyeballs and a severed rabbit’s foot, which brought its former owner no luck at all. And yesterday morning, in broad daylight, I saw two coyotes chase a fawn across the street and up into someone’s backyard. I didn’t see what happened next, but judging from the squealing and subsequent howling, it didn’t end well for the fawn. For once, Freddy looked relieved to be on his leash. 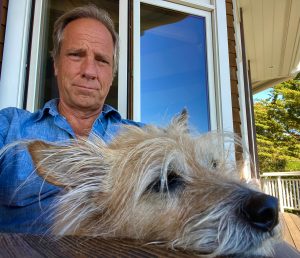 Full disclosure, while I pity anything that winds up getting eaten alive, I was happy to see the coyote do what our community leaders will not. Because we don’t really have a coyote problem here in Southern Marin – we have a deer problem, and it’s completely self-inflicted. Hunting is not allowed here, animal rights activists have resisted any and all attempts to control the population, and our elected officials are too paralyzed to act. And I can understand why. Couple years ago, a local guy named Mark Dickinson wound up in the national headlines for shooting and killing two deer on his property with a pellet rifle. He was not only sentenced to 30 days in jail and fined tens of thousands of dollars, he was forced to offer a public apology to the people of Marin, who were united by their mutual outrage and disgust.

I’ll admit, the deer he shot – a doe and her fawn – were mighty cute, and Mr. Dickinson’s reason for shooting them – (they were eating his landscaping) did not resonate with the people of Marin. On social media, there were literally hundreds of death threats, and sincere wishes for his painful demise. The local Humane Society weighed in as well, and roundly condemned Mr. Dickinson, who maintained he wasn’t trying to kill the deer, just frighten them off. Either way, it didn’t matter what he said – he was the next Michael Vick. Worse, because Vick was ultimately forgiven for running an illegal dog fighting operation. But Dickinson was not. He became so completely and totally vilified by his neighbors for shooting two deer that he had to move to Chicago. They literally ran him out of town. I can’t help but wonder though, how many of those people who called for Mark Dickinson’s head, would gladly take his pellet rifle and shoot that same adorable fawn straight through the heart, if doing so would save their own pet from the jaws of a hungry coyote. I know I would. 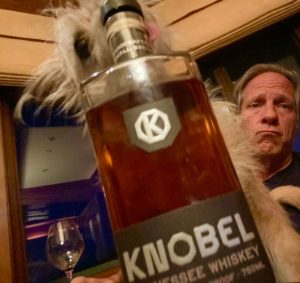 Anyway, Beth, back to the short answer. Freddy is fine, albeit, thirsty. As you can see, he’s developed a taste for my grandfather’s whiskey, possibly accentuated by the constant danger that now surrounds him. Or maybe, his pallet is more sophisticated than I assumed? Either way, he’s still living the high life, and appreciates your interest in health and well-being.

P.S. In general, I always prefer “the real thing,” but in the fine print on the front leg of the fake coyote, I can’t help but notice the manufacturer is The Montana Decoy Company. According to their website, they also manufacture all kinds of other decoys. Perhaps we’d be better off here in Marin with a large and healthy population of fake deer, fake coyotes, fake hawks, and fake geese? It would certainly simplify things. Then again, so would a fake Freddy.

I’m just not quite there yet…