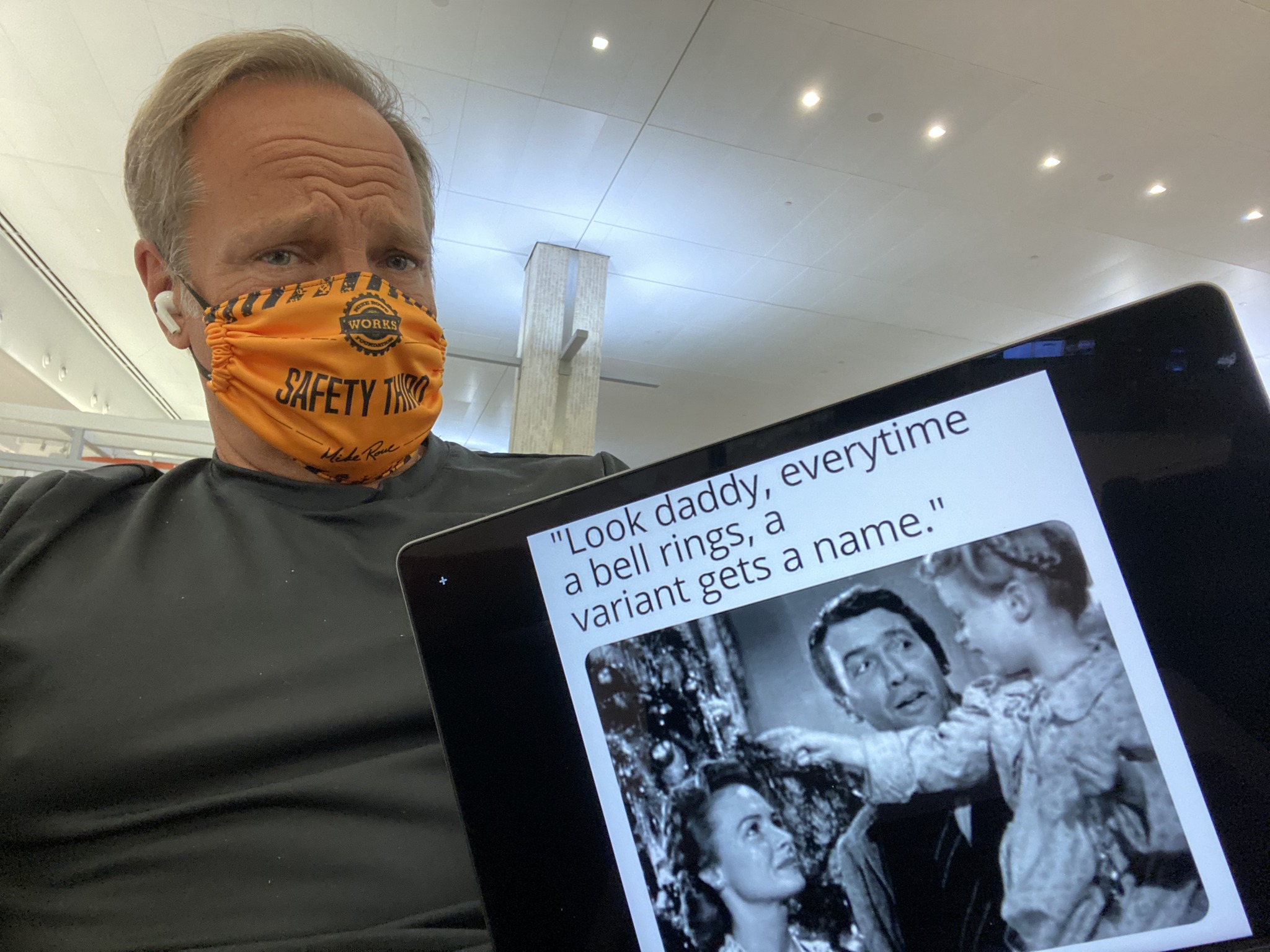 Interesting response to yesterday’s meme, which has so far reached nearly 6 million people and generated over 11,000 comments. If you want to understand just how determined people are to find what they’re looking for everywhere they look, peruse the comments. Some are angry because they saw the post as “anti-vax.” Others saw it as blatantly political. Others are angry because the resolution was crappy. (That one, I understand.) And of course, some people thought it was in bad taste, or insensitive, or just plain old not funny. Because I value all of the engagement on this page, sincerely, and because I’m about to spend another six hours in the air, hidden behind my Safety Third mask, I thought I’d pass the time responding to The Disappointed. Here then, is a small sampling, in no particular order.

Terri Madsen writes….What makes you think this is funny? You’re normally a source of wisdom, kindness, and humor. Your judgment is usually so good. Why would you post such a mean spirited political thing? This is classic gaslighting.

Hi Terri. Let me start by acknowledging that you’re not alone in your displeasure. Nearly 800 people have reacted to this meme with a sad emoji. 800! Nobody wants to see 800 sad emojis, Terri, especially a public figure who wants you to watch his TV shows, listen to his music, support his foundation, and read his books. On the other hand, 280,000 people have affirmatively liked the image. That’s a LOT of smiley faces. Tens of thousands of people found it hysterical, and 60,000 of those people have shared it. That puts you in the overwhelming minority. Of course, being in the minority – even a very tiny minority – doesn’t mean that you’re wrong, or that your criticism isn’t valid. But it does mean that maybe – just maybe – you might have missed something. Is that possible, Terri? Is it possible that you’re looking for something that isn’t there? I mean, if you typically find me to be a wise and amusing fellow, isn’t it possible that the problem here is not my “lack of judgment,” but rather, a lack of something in you? Personally, when I don’t see the humor in something that has everyone around me laughing, my immediate instinct is not to criticize the comedian of gaslighting or condemn those who around me for having a chuckle. My instinct is to wonder what I missed. I encourage you to do the same.

Marianna Lynn Moles writes…This feels like an anti-vaxx post to me. But maybe I’ve just been part of the emergency response team for 2 years too long. I find humor in most anything, but this doesn’t hit me right. Too soon.

Hi Marianna – Thanks for you service in the fight against this disease. Sincerely. But I’m curious. What exactly in the post strikes you as “anti-vax?” In my view, the decision to name every new variant has nothing whatsoever to do with a suspicion of vaccines, or a suspicion of mandates, or an opinion on Dr. Fauci, or any other COVID-related issue. This is the 13th major variant of COVID-19 detected so far, and the WHO seems determined to name them all. Fine. They’re working their way through the Greek alphabet. Recently, though, they decided to skip “Nu” and “Xi,” the 13th and 14th letters. “Nu” and “new” are homophones, and apparently, there was a concern that people were too stupid to comprehend the distinction. WHO officials also decided to skip Xi, pronounced “shee,” because, according to them, it is a common Chinese surname. Point being, we’re gonna run out of letters at this rate, and that’s worthy of some humorous commentary, in my opinion. I mean, come on. “Omicron?” Seriously? They could have gone with Omega. Instead, they went with the scary sounding alternative. It’s a virus, not a villain from The Transformers. Imagine if hurricanes were named like that. Never mind Ida or Bertha or Irma, let’s brace instead for Cruella, Stiletto, and Hellcat! Let’s scare the hell out everybody!

Again, I mean no disrespect, but how is any of that anti-vax? As for the “too soon” thing, I understand you’re on the front line of this nightmare and I meant no disrespect to the work you do on our behalf, or to those who have lost loved ones. So, you tell me – when will it be okay to lampoon the insanity of naming variants? Should we wait until the virus is gone entirely? I’m not a scientist, but it seems to me that we must all find a way to live with this thing, even as we fight it, name it, and argue with each other about it. Because I don’t think it’s going away, Marianna. Ever. And if any attempt at humor is always “too soon,” well, that would be too bad.

Hi Chris. Aside from those who feel “disappointed,” the largest group of unhappy commenters on this page are those who want me to know that I have “lost their respect.” This has fascinated me for many years, especially in your case, when the poster makes no attempt to explain why. Such people seem to believe that their opinion should matter to me, simply because it belongs to them. I find that kind of extraordinary. I mean, I have a healthy ego, Chris, but I would never assume that someone I’ve never met would care if I respected them or not. So, if I may be so bold, what lead you to conclude that your feelings – absent any form of explanation – might be considered valuable by anyone but you? I congratulate you on your self-worth, but humbly suggest that your feelings might be a lot more persuasive if they were accompanied by an actual argument.

Bruce L. Neff I like Rowe’s messages about schooling and the crafts. He ought to keep out of political nonsense, it has no place in his message.

Hi Bruce. In other words, stay in my lane, right? I get that. People are sick of celebrities and public figures mouthing off about everything under the sun. But am I not allowed to comment here on issues that affect me directly? Like, a global pandemic and the subsequent lockdowns? Am I not allowed to discuss the headlines of the day with people who come here and ask for my thoughts? I think I am. But is that what I did here? Look at the meme again, and tell me, where are the politics? Omicron doesn’t care how you vote, or for whom. Neither does Delta. COVID and her many variants do not discriminate based on politics. Likewise, “It’s a Wonderful Life” is a classic movie loved by liberals and conservatives alike. So then, how does one stay away from the “political nonsense,” when people see it everywhere they look?

Stephanie Plummer writes…I love so much of what Mike’s about, but I don’t respect that he pretends to be “non-politically biased” while seemingly most often being politically biased. Grow a set and own your beliefs, regardless of how it will impact those who follow you. Feels cowardly, and from a dude like Mike, and that’s sad.

Hi Stephanie. Do you know Chris Sanders, from three comments up? You guys should hook up. Start a support group for people who no longer respect Mike Rowe. I’ll do your advertising!

Look, don’t be sad. There’s enough sadness in the world. Just try to be honest with yourself. Do you really think that I’m the kind of guy who has not developed his own beliefs? Given the fact that you “love so much about me,” isn’t it possible you’re upset because the beliefs I’ve developed are not aligned with your own? You’re not wrong to suggest I’m biased. I am – big time. And if you want to know exactly where my biases lie, read The SWEAT Pledge. I wrote it ten years ago and shared it on this page many times. Here it is again. https://bit.ly/3yaFLWc But you’re wrong to suggest that my biases are “political biases,” because there is nothing inherently political about anything I believe. You’re just trying to make it that way. Frankly, I couldn’t care less if either party agrees or disagrees with me. Why should I? I’m not running for office, and they’re both too fickle to associate with.

Not so long ago, Stephanie, the overwhelming number of slaveholders in this country voted democrat. That’s not a political statement – that’s just a fact. Today, the democratic party is all in on Black Lives Matter. Likewise, conservatives used to be fiscally responsible. Well, they just passed a trillion-dollar infrastructure package. What’s “conservative” about spending trillions of dollars you don’t have? Point being, parties change. Platforms change. People change. So, why should I associate myself with either party, when neither party can agree with its own platform? Why should I give a damn what liberals or conservatives think of me? And why should you give a damn about what I think of them? To say it another way, I think I grew a pair some time ago. Question is, are they too large for you to handle?

P.S. Speaking of balls, Stephanie, I’m still having one with Santa’s Gotta Dirty Job. Last week, against impossible odds, the song became the most downloaded in the world, and #1 on Billboard. Check it out here and download it for a $1.29. https://bit.ly/3rR64PM All proceeds go to mikeroweWORKS and Folds of Honor.

P.P.S Speaking of mikeroweWORKS, the fundraiser with Knobel Whiskey is a runaway smash. We’re currently sold out of the gift sets, but still have the single bottles available. It’s delicious, and still available in time for Christmas. Go here to get some. https://bit.ly/3rR64PM Net proceeds benefit MRW.

P.P.P.S Oh, and speaking of fundraisers, the Safety Third masks have raised well over $300,000 for our scholarship program. If you share my belief that safety is ALWAYS important but NEVER first, get yours here. https://www.bfit540.com/pages/mike-rowe-works-foundation

I’d love to chat further, but something that looks like chicken had just been placed before me.