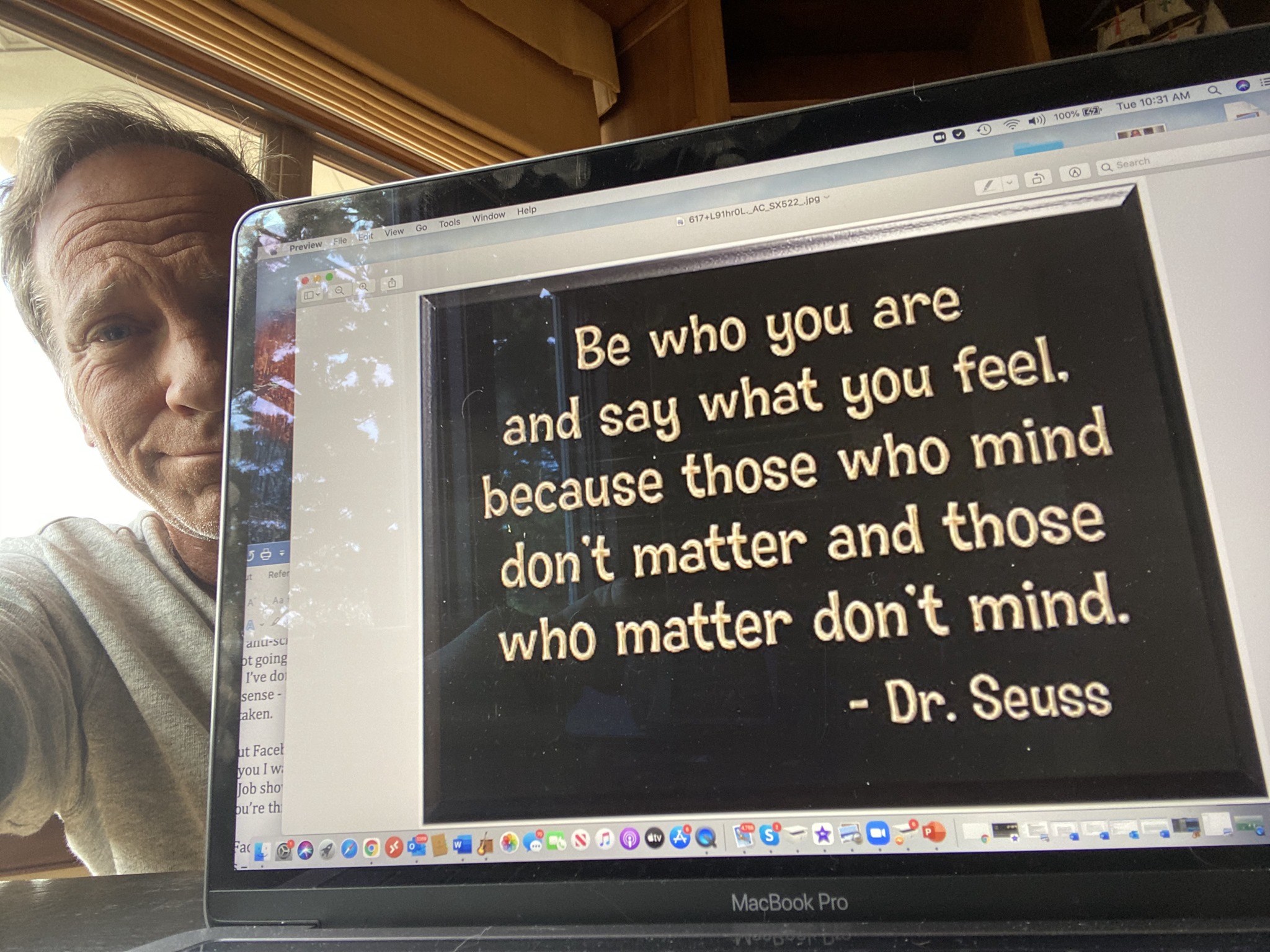 Lots of feedback on my recent post, which highlighted a few examples of how certainty and truth have taken divergent paths here of late. As usual, not everyone was delighted with my observations, as the comment section indicates. Here’s a poster who took umbrage but did so with more manners than many. Thus, I’m pleased to magnify his gentle criticism, with my own thoughtful response. As for the rest of you, thanks for participating. It’s a worthwhile conversation to have.

Look, Mr Rowe, it’s easy to take a set of quotes and predictions of scientists out of context and situate your post in a narrative that says Covid and Climate Change are hoaxes or greatly exaggerated. But when put in the broader context of the science that has been done, and the broader context of what scientists have said, Covid and Climate Change are both serious threats that should not be downplayed.

I don’t see how I downplayed either issue. I agree that both are deadly serious, and that both demand our attention. But does that mean we should ignore the long list of predictions and claims that have turned out to be false? Pointing out misstatements from powerful people who shape policy is not taking things “out of context,” it’s holding people accountable. Hundreds of journalists, politicians, and scientists who spoke with great certainty about both issues turned out to be dead wrong. That doesn’t mean that science is not to be trusted – but it does mean we can no longer hope to persuade skeptical people by simply proclaiming, “because the science is settled!” Sometimes it is, sometimes it isn’t. Point being, our current credibility crisis isn’t happening because powerful people were merely wrong about critical issues that affect us all – it’s happening because they were wrong, and certain, and unapologetic. That trifecta has had a devastating effect on the public trust, and for good reason. But this crisis of credibility is also happening because “cancel culture” is very real, as is the attack on free speech.

As I type this, I see that Mr. Potato Head is no longer a male, and Dr. Seuss is now a racist. Here in San Francisco, the school board has voted to remove no less than 44 names from the façade of public schools. Among them, Washington, Lincoln, Roosevelt, and Jefferson. These decisions, in my opinion, are all promulgated by people who share two qualities in equal measure – certainty and intolerance. They are certain of what they believe, and they are intolerant of those who disagree. If you revisit the sources I provided in my original post, you’ll see that combination appear over and over. It’s not a coincidence.

DH: Part of the narrative goes like this, the Texas winter storm was just a “one off,” the wildfires in the west just part of a “natural cycle.” Increasing storms, half the world’s coral gone, but, hey, so and so was wrong about these other predictions, so pay no attention. But that’s the tactic. “Everything is fine.” God forbid we agree there is a problem and figure out a way to address it.

MR: That’s your narrative, or somebody’s else’s – not mine. I cited specific leaders and specific experts to illustrate a very specific point. I never suggested that any of the events you describe are unworthy of our attention, or that we throw the baby out with the bathwater. I simply suggested the rise of certainty was correlated with the decline of humility, and Americans are starting to notice. Moreover, the onus is not on the American people to believe what our leaders and experts proclaim. They have a duty to persuade, not merely dismiss skeptics as “deniers.” But there’s an underlying hypocrisy at work here that transcends the business of being wrong, and a level of hubris that makes persuasion nearly impossible. Gavin Newsom’s future in politics is in real trouble today, not because of his policies, but because of his hypocrisy. Likewise, Andrew Cuomo’s words have come back to haunt him in a big way. “Believe all women?” Ok, let’s see if he means it. Al Gore scared the hell out millions of people by telling us the polar ice caps would be gone twenty years ago, and cited all kinds of scientific studies to support his claim. That doesn’t make him wrong about everything, but when he refuses to walk it back, it makes him unpersuasive. But you seem to be arguing that anyone who dares to hold experts responsible for their own words, is “anti-science.” And you’re doing it with the same level of certainty we hear from guys like Newsom, Cuomo, Gore, and now, John Kerry.

DH: You are a smart man, and you have a platform, and you can do better than these, albeit well crafted, one sided propaganda hit pieces. And they are, at end of the day, whether you agree or realize it or not, contributing to an anti-science narrative. Your post encourages doubt and sheds no light on what is going on.

MR: If it’s not obvious, my post was intended to encourage doubt. There is no way to get to the truth, but through a filter of healthy skepticism, and I don’t know of any reputable scientist who disagrees with me. As for “one-sided” arguments, I wasn’t trying to make a distinction along party lines. I know plenty of conservatives who support alternative fuels and abhor racism. Likewise, I know lots of Democrats who reject cancel culture and support free speech. My central point however, is unchanged – you can’t tell people to “follow the science,” only when it leads them in a direction you want them to go. And you can’t expect Americans to trust hypocritical leaders who refuse to acknowledge their own their mistakes, and then blame the people for doubting their veracity.

DH: But clearly most of your fans love it. You validate their belief, that there’s no real reason to listen to scientists. “Look, Mike just showed how wrong and stupid they are!” But since I am in the minority here, I don’t expect that you will listen and actually read the science. Instead stick with the drivel from fossil fuels funded think tanks, which is likely from where you mined the prediction quotes on Climate Change. Clearly, it’s working for you.

MR: You paint my fans with a broad and rather insulting brush, David. Lots of people on this page, myself included, are very interested in hearing from scientists. Personally, I’ve read dozens of books on both topics, including a few from the think tanks you disavow, but many others from staunch environmentalists who stand with John Kerry. But what would you have us do, when the scientists disagree? When exactly, is the “science settled?” When you say it is? When Al Gore says it is? When Donald Trump says it is? When Jake Tapper or Sean Hannity says it is? Again, pointing out factual errors is not “anti-science” or “one-sided.” The stakes surrounding these issues are huge, and the whole “shut up and obey” thing is simply not going to work anymore.

As for your arguments, I welcome them, obviously. In fact, I’m happy to magnify them, as I’ve done here. There are always two sides to every debate, and I would never try to silence yours. But spare me the “minority” nonsense – if I dare to disagree with your points on this page, it won’t be because you’re in the “minority.” It’ll be because I think you’re wrong.

DH: Sad to say, but Facebook is not conducive to actual conversations. I replied to your point about flattening the curve, but according to you I was just arguing with myself, so I probably am just arguing with myself here as well. So, in short, I loved your Dirty Job shows and I like the ideas of supporting the trades, but your anti-science, political propaganda, not so much. I’m sure you’re thrilled to know it. Take care and stay safe.

MR: Why blame Facebook? We’re having a conversation right now, aren’t we? Far from ideal, but what else can we do in these crazy times – meet for coffee and yell at each other through multiple masks from a safe distance across some parking lot? If so, I’d be telling you the same thing there that I’m telling you here: certainty and truth have nothing to do with each other, and credibility is a very fragile thing. Today, I think we’re long on certainty and short on truth. Thus, we’re even shorter on credibility. But I think you’re mistaken to blame people for being skeptical. Their skepticism is more than justified, thanks to a long list of preposterous claims from our elected officials, a lack of humility among our experts, an assault on free speech in our universities, and a national press corps who makes no attempt to hide their bias. Throw in an assault on Mr. Potato Head and Dr. Seuss and a few thousand statues of our founding fathers that are no longer appropriate, and perhaps you can start to see why people have begun to mistrust our institutions. As for “flattening the curve,” I was simply reminding people that we were all told a year ago – with great certainty – that the lockdowns would end when the curve was flattened. “Two weeks to flatten the curve!” Remember? A lot of scientists supported that promise, and millions of Americans trusted them. Well, the curve was flattened, but the lockdowns persisted. Pointing this out is not a criticism of science or scientists; it’s a criticism of certainty. As was the entire point of my post.

As for Dirty Jobs, I’m glad you liked it. That show damn near killed me, but there’s a rumor going around it’ll be back on the air later this year.

But of course, it’s hard to be certain…