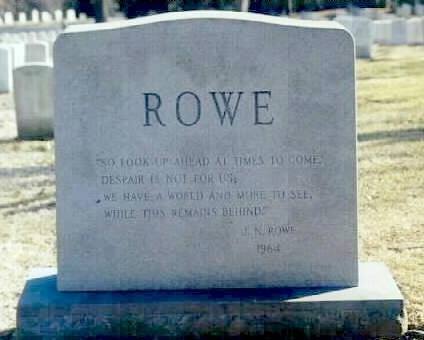 Andrew Rowe writes,
Sir,
I’m very curious what you think of the argument about thanking ‘all’ Veterans during this holiday? There are those who feel Memorial Day is equivalent to Veteran’s Day; in which ALL Veterans should be thanked. Then there are those that feel that this day should SOLELY be for those who have lost their lives while serving our country. I see many things online from both sides arguing about the spirit of the holiday, which unfortunately takes away from it’s sanctity. Personally, as a Veteran, I feel if I do deserve a thank you, Memorial Day is absolutely NOT the day to do it. I’m curious about your thoughts, not just in regards to this debate, but to the bigger issue of Americans slowly becoming divided about even the most hallowed of days? Thank you, and regardless of which side of the fence you stand on; thank you for what you do for us.

Hi Andrew
Aside from my time in The Boy Scouts, and a few forays on Dirty Jobs, I’ve never worn a uniform of The US Armed Forces. Nor have I stood a watch, seen combat, or put my life in the hands of a fellow soldier. So I’m not inclined to disagree with those who have, especially on an issue like this. Having said that though, I do believe the squabbling you describe diminishes the sanctity of the day.

The tendency to conflate Veteran’s Day with Memorial Day is unfortunate, but I don’t think it poses a threat to our country. The real threat, in my opinion, is the gap between those Americans who appreciate our military, and those who do not. Personally, if I were to “correct” someone this weekend, I’d focus my disapproval on those standing guard by their BBQ’s and lounging by their pools with no clue as to why they’ve been afforded a long weekend. In other words, I’d be far more offended by a lack of gratitude, than a simple misunderstanding among the well-intended.

One of the biggest threats facing the country, is the degree to which the average American has become disconnected from The Armed Forces. Most Americans today don’t have a personal relationship with anyone in uniform. Statistically, that’s understandable; less than one percent of the population actually wears one. But that’s no excuse for the breathtaking ignorance of what our men and women in uniform do on our behalf.

A majority of Americans today can’t look at a map and identify the countries where our people are currently fighting and dying. Many can’t even identify the branches of the military, or explain the relevance of the wars we’ve fought, or the importance of the freedoms we enjoy as a result. Wars today require zero sacrifice from the civilian population, and therefore zero understanding. Zero understanding leads to zero awareness. Zero awareness leads to zero gratitude. And zero gratitude is a clear and present danger to our many freedoms. The problem is not limited to our military. Consider:
One percent of our population now feeds 300 million people three times a day. Are we impressed? No, we are not. The modern farmer is under siege, and grossly misunderstood by all those who rely upon his expertise. Likewise the skilled worker, the teacher, the first responder. We have become a people of overwhelming nonchalance, spoiled rotten by the sacrifice of those who do the heavy lifting, and profoundly disconnected from a great many things that make freedom and civilized life possible. If I were to allow myself to get offended by anything this weekend, that’s the thing I’d rail against – the monumental indifference among those who take our freedoms for granted. That frankly, scares the hell out of me.

Obviously, there’s a difference between a veteran who died serving this country, and a veteran who did not. Obviously, we must memorialize the dead, and remember those who paid the ultimate price. But we should also remember the decision that lead them to that sacrifice – the decision to wear the uniform in the first place. Because those who died fighting for our country, assumed the exact same risk as those who fought but survived. It’s the risk we should memorialize – as well as the sacrifice – because the assumption of risk is the thing our freedom depends upon most. Not death itself – but rather, the willingness to accept the risk of dying.

From that perspective, I can understand why many people confuse and conflate the two holidays. I can understand why many would offer their thanks to a man such as yourself. Perhaps they should know better on a day such as this, but in a country of such rank indifference, I’m not inclined to condemn them. At least they’re aware enough to know their freedom didn’t come cheap. And really – isn’t that the goal of both days?

Mike
PS. I can’t help but notice we share a last name. You might be interested in another Rowe, who I stumbled across last Memorial Day. His headstone is pictured, and his story is nothing short of incredible. No Relation