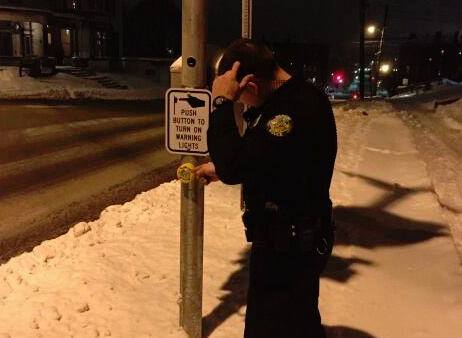 I don’t follow The Bangor Police Department’s Facebook Page because I like cops, (though I do,) or because I like Bangor, (which I also do.) I do it because I appreciate good writing. Well, this guy can write…

Hitting the building twice with a motor vehicle will cause those inside the building to contact the local gendarme. Upon the arrival of Officer Burns and Officer Perry, they discovered the driver was a local lady that wore what any one of us might wear. To bed. The description in the report was that she was draped with pink, plush robe and Cheetah print, fuzzy slippers. Naturally, her dog had come along for the ride. It was a small dog. Exactly what you would expect if you were to imagine the kind of dog that a woman wearing a pink robe and cheetah slippers would have along for the ride. She had been consuming spirits prior to her arrival at the accident scene. She was arrested and charged with Operating Under the Influence. The dog was well cared for at the local shelter for the night. I don’t know what else to say.

Officer Dave Farrar took the complaint of a man drinking in public. This is not allowed for various reasons. We understand the drinking part. Its the public part that causes an issue. We suggest looking for more private locations to imbibe, but we are not judging you. Just giving free advice based on state statutes. When Farrar found the staggering man, he inquired about the fact that the man had been drinking on someone else’s steps. The man told Officer Farrar that it was not important because he was, “done now, so it doesn’t matter.” This thinking is logical. We accept it. Not as well as Spock would have, but Farrar is not a fan of Spock. Not because Spock is a bad person but because Farrar is more of a realist and since he is a cop, we do the backstroke in the pool of realism. As a matter of fact, we don’t even towel off the realism. We like to “air dry.” Farrar asked his name and the man said, “it’s illegal for me to tell you my name because then you’ll know I have an arrest warrant for unpaid fines.” This piqued the young realist’s interest. The man did not lie. His warrant was active and he went to jail. Live long and prosper my friend.

Reports that start with, “A shirtless male approached my cruiser” usually end up with a soundtrack that includes the tinkling of handcuff chains. This one is no different. The man claimed his shirt had been ripped off by a female as she pulled him out of a cab. She was located by the sound of her voice. Which was like a typical voice, yet louder and more annoying. Her speech was slurred and she approached Officer Burns only to be told that she was too close. She refused to back away and before a true and formal introduction could be facilitated, she was arrested. She was scrappy and during the search incident to arrest, she was disarmed of a lovely necklace that was not only fashionable, but a knife as well. The lady was then taken to jail for the crime of disorderly conduct. She had some experience with the shackles as she was able to slip them off during the short ride to jail. A veritable, knife toting, Houdini. Only louder. The shirtless male left the area before we could speak to him again. I would say he was smarter than all of us. Godspeed, shirtless male. Godspeed.

The Thomas Hill Standpipe is a great location to gaze over the Queen City. Some call the Standpipe the “crown jewel” of our community. It is also a great place to get a good cell phone signal. A man that was encountered there in the parking lot by Officer Olmstead was found to have an active arrest warrant. He was on the phone. Olmstead allowed the call to be completed before placing the man in handcuffs. He was pleasant and asked Olmstead if he would be kind enough to place his keys in the tailpipe of his vehicle so that his friend could stop by and pick it up when he had the opportunity. Olmstead happily placed the keys there and found the car had been moved a little later on that night. It speaks volumes to the honesty of our citizenry if the soon to be incarcerated are trusting enough to leave their keys with their car when using the, “phone-a-friend lifeline.”

Before those of you from “away” get a bad vibe about our lovely city, I will share this story. Two males came to the counter of the Bangor Police Department this past weekend to turn in a small backpack they had found. It contained a Kindle Fire HD and 2 Barnes and Noble Nook Tablets.

I share this because we now can prove that we have honest people and many that read for pleasure. The takeaway is that it is a great place to read and be honest. Do not judge us by those who might have overindulged a bit. The loud knife toter was from California, the lady in the pink robe was from a town just north of us. The man on the phone, he was from Belfast. The man that was drinking in public was upfront and honest with his selected police officer. Of course, he was from Bangor.

One more thought. We don’t feel right about arresting so many who come here from out of town. If you have an arrest warrant or feel the need to commit a crime, try doing it in your own community. Your local police department would be willing to give you the same professional courtesy that you receive when arrested in Bangor. We do not support criminal conduct but we are perfectly willing to allow you to do the naughty deeds somewhere else. Sharing is caring.

These are the stories. We urge those who follow our page to keep your hands to yourself, leave other people’s things alone and be kind to one another. I hope your Wednesday is bright and cheerful.

TC’s Maxim #568 “The liquored up and louder will seldom wake from a slumber, prouder.”

Be cautious on the roadways this morning. There are some slick conditions caused by black ice in certain areas. Intersections are places to be extra careful.

The men and women of the Bangor Police Department will be here!
——

[Edit: I have no idea if the cop demonstrating the incredibly helpful crossing button is the author of “Got Warrants.” I just posted the picture because I appreciate good illustrations as much as good writing, and Bangor clearly has both. MR]