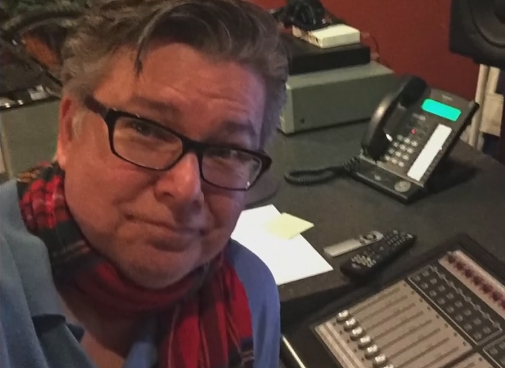 This is my old friend Chuck. He’s a working actor, here in The City of Angels. As many of you know, he also runs the mikeroweWORKS Facebook page.

Twenty-five years ago, Chuck and his girlfriend moved to LA to start their careers. Later that same year, his girlfriend dumped him. The week before Christmas.

Naturally, Chuck was devastated. He was far from home, utterly alone, and desperate for the company of friends and family back in Baltimore. Alas, with fame and fortune still on the horizon, there was no money for the long flight home. What to do?

Depressed by the constant sunshine, heartsick with unrequited love, and stranded in a town without pity, the poor wretch did what any starving artist would do – he pulled out his battery-operated Casio keyboard, sat cross-legged on the floor of his crappy apartment, and wrote a song.

When Chuck first played this for me two and half decades ago, I told him I thought it would depress a hyena. But a few days ago, he dusted it off, and re-recorded it with some friends. It was better than I remembered. In fact, I’ve been humming the damn thing all day, which is both a compliment and a criticism.

Anyway, it made me nostalgic for home, and sentimental for friends and family no longer on the grid.
Perhaps it’ll do the same for you.