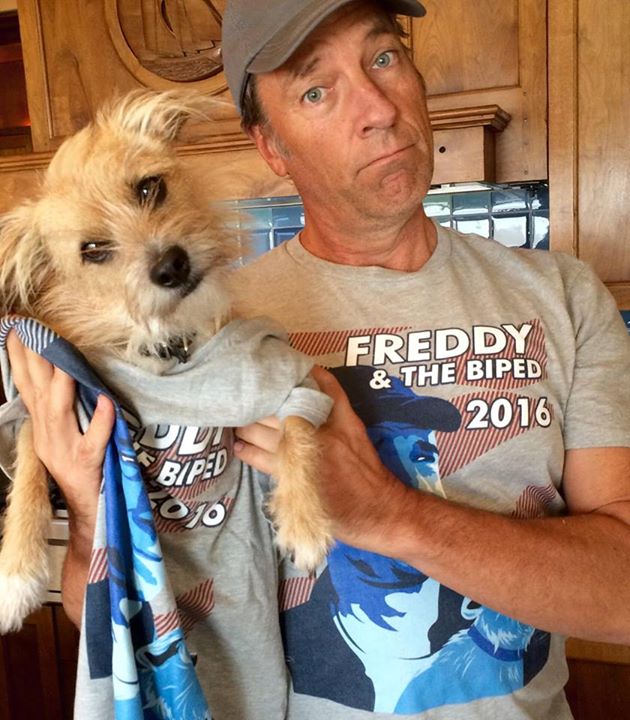 As threatened, Freddy has seen your questions, and responded below. God help us.

Where do you stand on the issue of bipeds forcing canines to wear humiliating clothing?

As you can see from the photo, clearly – I’m opposed. Dogs were designed to walk the earth naked. We look better that way, and no human has ever improved the appearance of any canine by dressing them up like a person. Humans on the other hand, should be required to remain clothed at ALL times. I’ve seen The Biped on several occasions parading around in his birthday suit, and I can tell you – it isn’t pretty. Delicate parts flap around without support or supervision, and the entire impression is quite frankly, off-putting. The better question is – “What will President Fred do about the humiliating clothing that humans insist upon wearing?”

Well for starters, I’d require all students in public school to wear a uniform. That’s right – a uniform. Preferably one that fits. Too many females are dressing like floozies, and too many males are stumbling around in pants that have no hope of staying up on their own. How can we expect humans to get jobs if they can’t figure out how to tuck their shirts in and pull up their pants? Honestly, if you can’t dress for success, why dress at all?

I’m not only pro-peanut butter, I pro anything that tastes good. I honestly don’t want to live in a world where thick wads of creamy Jiff can’t be jammed deep into the hollow of a cow bone, frozen for a few hours, and brought to me as part of my evening regimen. Yes, I realize peanut butter is high in fat content. I also understand your species is fond of taxing, discouraging, and even outlawing certain types of food deemed by “experts” to be “bad” for you. Well, that’s just the kind of paternalistic nonsense that I’ll do away with on my first day in office. As long as the label tells the truth, I don’t care what’s in the container. Fast food, slow food, sugary drinks…whatever. Caveat Emptor!

As for belly rubs, whatever Homo Sapiens do in the privacy of their own homes is of no concern to me. I say, if it feels good, rub it. If it doesn’t feel good, rub it harder.

I’m a 3 y/o Labradoodle, and I’m not allowed in the same places that screaming babies and undisciplined children ARE allowed. If elected President, what would you do to promote more pet-friendly spaces?

Tell me something. Why the hell would you want to occupy the same place as screaming babies and undisciplined children? I’ve been in many such places, and frankly, I’d sooner move in with the cat downstairs than spend another minute in a roomful of snot-nosed urchins who think I’m a plush toy on display for their personal amusement.

Call me old-fashioned, but I’m inclined to keep the species somewhat segregated. Not the breeds, mind you, just the species. Good fences make good neighbors, know what I mean?

My dogs have questions for Candidate Freddy. Nick (Shiba Inu) asks: what is your plan of action against thunder storms? They haven’t killed us all yet, but it’s just a matter of time.

Hi Nick – After a loud clap of thunder, my plan, as President of these United States, is to immediately to shit myself. (Notice I didn’t say “shit my pants?” This is because, apropos of the prior query, I don’t wear pants. Just one more advantage.) Anyway, some things are unavoidable, and the lack of canine continence in the face of mother nature’s fury is one of them. Believe me, I won’t be happy about pooping all over the Oval Office, but I won’t ashamed either. It’s in our DNA, and we’ve got to be realistic about what we can change and what we can’t.

Ranger – The short answer is yes, we’re actively looking for qualified security personnel. I’ve seen the Biped deal with a flurry of stalker-issues over the last year, and I imagine things will intensify for us both once I’m sworn in. Please forward your resume, along with three references. And a peanut-butter bone wouldn’t hurt, if you’re serious about the getting hired.

Freddy, what is your stance on postal workers, Girl Scouts, and other unwanted guests outside the door? Are nuclear weapons an option you are willing to consider?

Stephen’s Dog – When an outside threat presents itself at our door, I promise to act quickly and decisively, as well as consider any and all options available to me. We’ve seen the results of appeasement, sanctions, and other “measured” responses. They don’t work. They just keep coming back. My bark is very loud, but it is not worse than my bite, and I suspect the best way to keep the barbarians at the gate is to prove it from time to time.

Freddy – What’s your opinion on accepting refugees from Syria?

Well Kristi, as a former refugee myself, I know what it’s like to be both displaced and unaccepted. My first three months in this country were spent in a pound, so I’m sympathetic to any law-abiding mutt looking to make a better life for himself here in the shining city. But look – you gotta go through the process, and you gotta play by the rules. And the rules are changing.

Under my administration, you wait your turn. You learn a few basic commands. You get checked for worms, rabies, distemper, parvo, fleas, and ticks. Then, if everything checks out, and my people assure me you’re not an asshole, I let you in and you assimilate. You don’t bitch about “this breed having it better than that breed.” You don’t bark at the moon, you don’t terrorize the cat, and you don’t drag your ass across other peoples carpet. In short, you go to work and get along. Or, we cut your balls off. (Trust me, you don’t want that, but it happens. All the time.)

Point is, I don’t care about your pedigree. This is a country of mutts, and as long as you’ve been properly vetted, I don’t care where you’re from or what you look like or what Master you worship. Just remember – my job as President, first and foremost, is to protect the mutts who are already here. So if you show up growling and snarling and foaming at the mouth, you’re gonna have a long wait.

Hey Freddy – a question for The Biped. It says a “portion of the proceeds” will benefit your foundation. I wondered if you could tell me on average what percent of a contribution goes to the charity?

Regarding contributions, 100% goes the foundation. If you buy something from the mikeroweWORKS page, that’s no different than writing a check directly to the foundation. 100% of the money goes there. But anything purchased elsewhere varies, because the margins are always different. A Mike and Freddy Bobblehead for instance, purchased on Bobbleheads.com, throws back 20% to the foundation, which is actually pretty good.

This tee-shirt we’re currently selling throws back 50%, because it’s less expensive to make.

Bottom line, if your primary purpose is to contribute to mikeroweWORKS, there’s no better way than writing a check or buying some swag directly from us. But if you want to help the foundation AND get a really cool shirt that features a presidential dog, there’s really only one place to go.