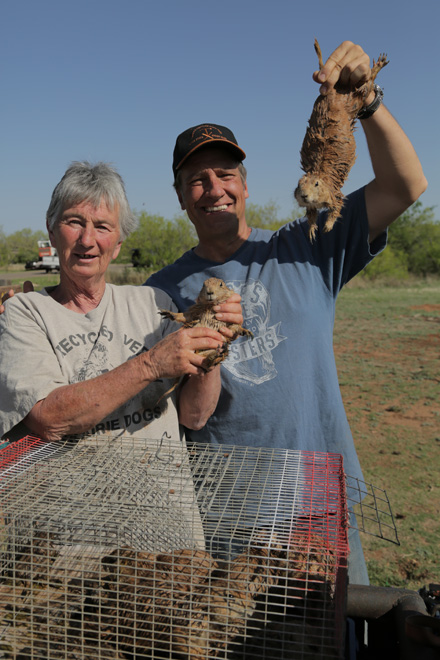 “Tell me I didn’t just see Rowe in a preview trapping and mishandling a prairie dog by his feet hanging upside down, while mischaracterizing the animal as “vermin.” Shame on CNN.”

I don’t know what you saw, therefor I can’t tell you with any degree of certainty what you didn’t see. However, if you were watching CNN, and observed somebody interacting with a prairie dog, it is entirely possible that the somebody in question was me. In fact, if you watch a future episode of Somebody’s Gotta Do It, you’ll see me assisting Lynda Watson – the world’s leading lover of prairie dogs – in her ongoing attempt to relocate 54,000 of these adorable critters from one part of the Texas panhandle to another. Along the way, you’ll see us flush them out of their holes, disinfect them, put them in cages, drive them to a less deadly part of the prairie, and drop them headfirst into a new colony we built for them earlier that same day.

As you probably know Dan, America’s short grass prairies have undergone a massive transformation over the last few years. This has happened in part, because of man’s stubborn refusal to let naturally occurring prairie fires burn from time to time. As a result, much of the prairie is now covered with mesquite. All this mesquite severely limits the prairie dog’s ability to pop his cute little head out of the ground and enjoy an unobstructed view of his surroundings. Consequently, a host of natural predators now have a much easier time feasting upon them, and their numbers continue to plummet as a result.

Now it’s true Dan – during the relocation process, I did present several of these enchanting rodents to the camera for closer inspection in a posture that is undeniably, “inverted.” However, I did not hold them by their feet, as you suggest; I held them by their tails. And no, it is NOT possible that this could be construed as “mishandling.” Unless of course, your definition of mishandling is different from that of Lynda Watson’s, the world’s leading lover of prairie dogs. If that’s the case, you sir, are at odds with a formidable adversary, and I can only say, “good luck.”

Now – regarding their status as “vermin.” According to google, “vermin” is defined thusly: “any wild mammal or bird that’s believed to be harmful to crops, farm animals, or game, or that carry disease, e.g., foxes and rodents.” Certainly, prairie dogs comport with that definition. Unquestionably, they are rodents. But obviously, labels do nothing to preclude any creature from becoming the object of our affection, as your own Facebook page clearly illustrates. Even Lynda’s own shirt refers to the creatures she’s trying to save as “recycled vermin,” so I’m not sure why the term offends you.

Personally Dan, I’m a big fan of prairie dogs, for the same reason I’m a fan of all rodents and vermin – because I appreciate and understand their vital role in the food chain. As a “keystone species,” prairie dogs are critical to the ecosystem precisely because they taste so yummy to so many other less adorable animals. For this reason, I support any and all attempts to revitalize their population, especially since man has played such a large role in decimating their numbers over the years.

Finally, regarding the “shame” you’re so anxious to foist upon CNN, I’m not sure I understand your reasoning. CNN has given me an hour of prime time(Sundays at 10!) to introduce America to a number of individuals who are deeply passionate about a wide variety of topics. If those individuals, or those topics, or my own interactions with either do not comply with your own worldview, you’re certainly free to shame whatever individual, organization, or network you find offensive. Moreover, you’re cordially invited to use this page to do so. However, I feel obliged to tell you that few things are less persuasive than these virtual spasms of self-righteous indignation brought about by a flurry of facts not in evidence.

PS. If you’re truly put off by the sight of a rodent being dangled by it’s tail, I should in all good conscience discourage you from watching another upcoming segment that features terriers and rats. You’re not gonna like it….