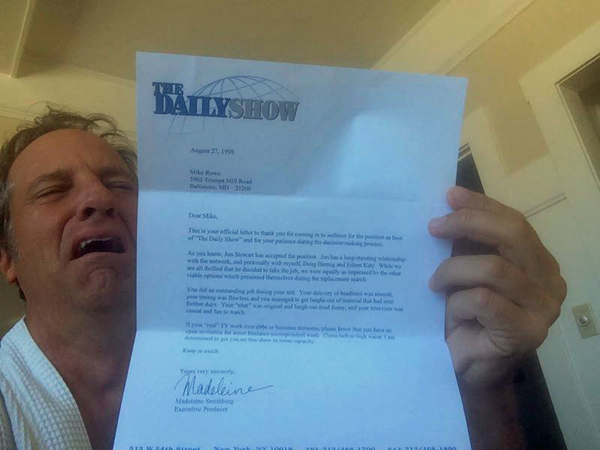 These days, Mike Rowe is best known for hosting the Discovery Channel’s Dirty Jobs — but years ago, he was almost host of another well-loved show: Comedy Central’s The Daily Show.

Uproxx discovered that a fan wrote to Rowe asking how he deals with rejection, and he replied on his website with a story about his audition for The Daily Show. “The audition process was extensive, and when the dust settled, it came down to two — Craig Kilborn and me,” he wrote. “The job went to Craig, and I was crushed.”

Kilborn hosted The Daily Show for its first two years before Jon Stewart took over in 1999. But before they called Stewart, they went back to Rowe. “This time, I wasn’t going to let it get away,” Rowe wrote. “I did the very best job I could, and all modesty aside, I killed it.”

Comedy Central apparently agreed: Rowe says they told him he was about to become host of The Daily Show unless the network suddenly got enough money to pay for a bigger name — which they, of course, did.

Rowe also shared a photo of his rejection letter, which he says he remembers making him feel “sh—y” years ago. “Reading it today though, I can’t believe how lucky I was to have been rejected. It was a critical step in a long series of failures that got me to the sewer, where my redemption awaited, and a new level of job satisfaction that I frankly never imagined.”