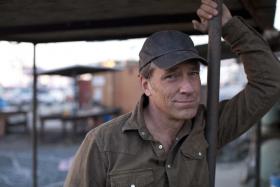 Host of ‘Somebody’s Gotta Do It’ sheds light on hometown

Baltimore’s hometown boy got down with unsung laborers in his first show, Discovery’s “Dirty Jobs.” Now, on his new show for CNN, “Somebody’s Gotta Do It” (check local listings), Mike Rowe features people with a passion for unique callings — among them, those promoting the Baltimore he knows and loves.

Here, Rowe talks about getting to know his native Baltimore, his unusual travel experiences and his own “dirty” job.

Q: Tell us about your new show “Somebody’s Gotta Do It.”

“Dirty Jobs” was about people who were literally “on the job.” The new show is about people on a mission — could be a vocation or an avocation. We look for people who are passionate about a pursuit. Last week, I met a guy who runs a Turkish bath house in Chicago. Before that, I carved ice sculptures with a husband-and-wife team. Before that, I worked as a bullfighter with the PBR. Tomorrow, I’m curling with an Olympic champion. It’s a rich pageant, as the song goes.

Part curiosity, part fondness for my fellow man, part contempt for the state of nonfiction television. This is a simple show about real people doing stuff they love. I think it’s important to have a few shows like this on the air somewhere.

I wanted to do another show where I could still be the person I am in real life. This is the only format that allows me to do that. I also wanted to shine a light on people I think the country ought to meet.

Telling the truth. Many people assume the whole town is like “The Wire” or “Homicide.” Of course, that’s not the case, but neither is it all sunshine and rainbows. Too often, tourism bureaus will overcompensate and present a view that’s no less lopsided than the image they’re attempting to correct. Most people can see through that sort of propaganda.

My old friend Alan Charles runs an advertising firm here in town. He and the city’s tourism bureau asked me to participate in a new campaign. I thought it might be fun to profile the efforts of those “somebodies” as a part of the show. I was right.

Q: What do you love most about your hometown?

I love that it has a chip on its shoulder. I didn’t realize that when I moved away in 1989, but it’s true. We’re not D.C. and we’re not New York. We’re sure as hell not Philadelphia. We’re the place you pass through on the way to someplace bigger or sexier or more glamorous. That means the people who move here to live and work usually have character. When you choose Baltimore, you choose something very real. It’s often called a big small town, and I think that still applies. The individual neighborhoods are still intact. I love that.

Q: How has it changed since you grew up here?

Parts of it appear to have gotten (worse). Other parts are infinitely better. From what I can tell, the people are still hardworking, and the town is still adjusting to the same pressures and challenges facing all major cities. I suspect it always will. Fells Point is still fun, and the Inner Harbor is fantastic. But being a creature of habit, I’m still sucked into the places I frequented when I lived here.

Q: The best way to get to know the city better?

I took a water taxi all over the harbor and saw some sights from a perspective I’d not seen before. Do that. Aside from that, do the obvious. Drive around. Get lost. Get found again.

For me, coming back here means reconnecting with friends and going to any one of a dozen local joints for crab cakes, crab soup and beer. It’s trite, I know, but if you come to Baltimore and don’t eat crab soup at least once a day, you might as well have stayed wherever you were.

Q: What do you always check out when you’re in town?

I always see what’s playing The Lyric. I got my start in the opera of all places, and The Lyric is still a great place to see a performance, any performance, really. And if the Orioles are playing, it’s hard to have a bad time at Camden Yard.

Q: Tell us about your mikeroweWORKS Foundation.

The country has a massive skills gap that still gets very little press. Nearly 3 million jobs are available right now for people willing to learn a skill that’s actually in demand, and the vast majority (of jobs) do not require a college degree. On “Dirty Jobs” — even at the height of the recession — I saw “help wanted” signs everywhere I went. There was — and still is — a real struggle to find people willing to hit the reset button and learn a truly useful skill.

I thought it might be nice to shine a light on some of the opportunities available in the industries that were featured on my show. So the foundation started offering “work-ethic scholarships” to people who were willing to pursue the necessary training. It’s been fun and rewarding. So far, we’ve given away over $3 million in scholarships and kept the conversation lively.

Q: You’ve been all across the country for your shows. What has surprised you the most in your travels?

I am consistently surprised and humbled by the familiarity with which people talk to me. From Miami to Seattle, people are eager to share their stories about work, life and damn near everything else. People really are the same wherever you go.

Q: The most memorable job and/or person you’ve encountered?

Bob Coombs, a pig farmer in North Las Vegas. Or maybe Lawrence Jackson III, a garbage man in San Francisco. Or maybe Mike and Sue McClusky, some dairy farmers in Indiana. Or maybe Jeremiah Sullivan, inventor of the Shark Suit. Or maybe …

Q: The most important thing you pack for your trips?

I pack very, very little. But I hate to forget the Ambien and the Kindle.

Q: The secret to stress-free travel?

Stress-free travel does not exist. The key to staying sane is to figure out how to enjoy the stress. The only way to do that is to assume the attitude of the vaudevillian clown and look forward to the next pie that’s destined to hit you in the face. You’ve gotta be in on the joke to travel.

Q: Where are you going next?

Oregon. Something about moving a herd of elk with helicopters, an elephant gun and large nets.

Q: If you could wake up anywhere tomorrow, where would it be?

There’s a chair in my living room (in San Francisco, Calif.), one of those overstuffed Pottery Barn affairs. It faces a window out to the Golden Gate Bridge. I like to pass out in that chair, usually after a glass of something red with some pulp fiction propped open on my chest. In the mornings, the sun will hit the Marin headlands and accentuate the emerald green just across the bay. The water is oftentimes a royal blue, and the bridge is, of course, a vibrant orange, usually revealed as a thick layer of white fog slowly recedes. If I time it right, the smell of coffee awakens me just as the bridge comes into view, and the dog starts chewing on my fingers. All things being equal, I’d just as soon wake up there.