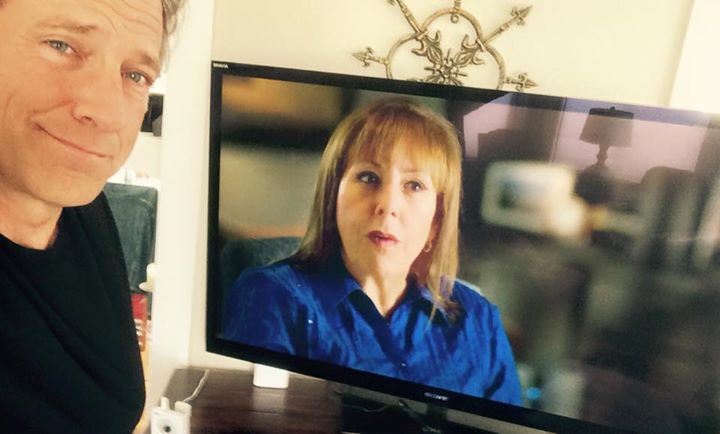 When I was shooting Dirty Jobs, I hired a woman named Spanky Taylor to help me fulfill requests from viewers and fans. If you ever asked for and received from me an autographed photo, or a signed letter for an Eagle Scout, it was Spanky who licked the stamp and got it in the mail, many thousands of times.

Anyway, I just finished watching a documentary on HBO in which Spanky appears. That’s her behind me, on my unnecessarily large TV screen. The documentary is called “Going Clear,” and while it’s not exactly an Easter story, it’s most definitely a tale of resurrection and new life. I’m posting this today because I think everyone who has ever been lied to or deceived should watch it.

Going Clear, among other things, tells the story of Spanky Taylor’s escape from The Church of Scientology. Like all Church employees, Spanky signed a “Billion Year Contract,” and pledged her life to the cause. She was, according to her own account, brainwashed, programmed, and forbidden from leaving the property. When she gave birth, her baby was put in a separate location, so as not to interfere with her Church duties. One day Spanky went to visit her daughter. The baby was malnourished and utterly neglected. She was covered with flies, and her eyes were filled with pus and fused shut. Something finally snapped, and with the help of a friend, Spanky took her child, fled from her captors, and never looked back.

I knew Spanky’s story when I hired her, so when I watched her tale unfold on my unnecessarily large screen, I was not struck by the details of her personal ordeal, or by the incredible stories of other members who broke free and agreed to come forward. In truth, I’m no longer shocked by people who choose to follow a charlatan, or give away all their money, or forsake their friends and family to seek some greater truth, or drink whatever Kool-Aid is being served. The right to make bad decisions is an important part of being free. And to be clear, (as it were,) I don’t begrudge Scientology’s right to exist, or their right to separate a fool from his or her money in whatever legal means possible. Caveat emptor. But beyond all that, the thing that really chaps my ass is the fact that our government has enabled Scientology to grow into the colossus it’s now become.

In 1993, The IRS granted tax-exempt status to Scientology. This ruling not only saved Scientology many millions of dollars, it gave them status as a worldwide religion, and dramatically increased their power to recruit more members, or customers, if you prefer. That changed everything. The financial facts are beyond dispute – Scientology is a multi-billion dollar business that sells a tangible service called “auditing.” They also create “auditors,” for a price. Prior to 1993, an auditing session was no different from a tax-standpoint than a session with a palm-reader, a fortune-teller, a hypnotist, or a Voodoo Priestess. It was a taxable event. That’s no longer the case. Today, The Church of Scientology generates billions of dollars in revenue, and pays no tax at all. Zero.

Maybe I’m still a little cranky from the check I just wrote to Uncle Sam. Hell, maybe I should write a book and turn mikeroweWORKS into a religion. Or, maybe not. Either way, for all sorts of reasons, “Going Clear” made me angry, and if you’re offended by bullies and opportunists who take advantage of people at their most vulnerable, and an IRS that seems both craven and manipulable, it’ll make you angry too. But mostly, “Going Clear” made me very proud of my friend, and others like her. It’s a hell of a thing to realize everything you believe is not what you thought it was. And it’s even harder to confess your mistakes to the world and start over. Paul Haggis, a talented and successful screenwriter comes forward, along with a handful of former members and church officials who endured the kind of threats and intimidation that would keep most people silent. Their courage is impressive.

Going Clear is not a blockbuster. It does have star power though, and more than it’s share of heroes and villains. Some of whom you’ll certainly recognize. Check it out.