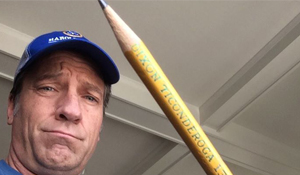 Host of “Somebody’s Gotta Do It” defends Wisconsin Gov. Scott Walker’s lack of a college degree

TV host and outspoken fan of “dirty jobs” Mike Rowe had some pointed criticism for Democratic strategist Howard Dean over his suggestion that likely 2016 GOP candidate, Wisconsin Gov. Scott Walker, is unqualified for president because he did not finish college.

“I don’t agree with Howard Dean – not at all,” Rowe wrote in response to a question he received from a fan on Facebook.

“I think that making elected office contingent on a college degree is maybe the worst idea I’ve ever heard,” he added.

Rowe related his own experience of getting his first television job — without any prior experience or education in the field — as proof that a college education doesn’t necessarily make someone more qualified.

The host of CNN’s “Somebody’s Gotta Do It” got his start at QVC in 1990 after passing an audition that required him to sell an ordinary pencil like it was the “next great thing.”

“QVC had a serious recruiting problem. Qualified candidates were applying in droves, but failing miserably on the air,” Rowe wrote. “Polished salespeople with proven track records were awkward on TV. Professional actors with extensive credits couldn’t be themselves on camera. And seasoned hosts who understood live television had no experience hawking products. So eventually, QVC hit the reset button. They stopped looking for ‘qualified’ people, and started looking for anyone who could talk about a pencil for eight minutes.”

Read the complete article on thewrap.com.