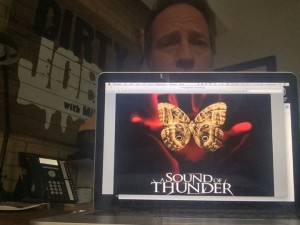 The federal minimum wage is $7.25 and hour. A lot of people think it should be raised to $10.10. Seattle now pays $15 an hour, and the The Freedom Socialist Party is demanding a $20 living wage for every working person. What do you think about the minimum wage? How much do you think a Big Mac will cost if McDonald’s had to pay all their employees $20 an hour?

Back in 1979, I was working as an usher for United Artists at a multiplex in Baltimore. The minimum wage was $2.90, and I earned every penny.

When I wasn’t tearing tickets in half and stopping kids from theater hopping, I was cleaning out the bathrooms, emptying the trash, and scrapping dubious substances off the theater floor with a putty knife. I wore a silly outfit and smiled unnaturally, usually for the entirety of my shift. I worked 18 hours my first week, mostly after school, and earned $62.20. Before taxes. But I was also learning the importance of “soft skills.” I learned to show up on time and tuck my shirt in. I embraced the many virtues of proper hygiene. Most of all, I learned how to take shit from the public, and suck up to my boss.

After three months, I got a raise, and wound up behind the concession stand. Once it was determined I wasn’t a thief, I was promoted to cashier. Three months later, I got another raise. Eventually, they taught me how to operate a projector, which was the job I wanted in the first place.

The films would arrive from Hollywood in giant boxes, thin and square, like the top of a card table, but heavy. I’d open each one with care, and place each spool on a separate platter. Then, I’d thread them into the giant projector, looping the leader through 22 separate gates, careful to touch only the sides. Raging Bull, Airplane, The Shining, Caddyshack, The Elephant Man – I saw them all from the shadowy comfort of the projection booth, and collected $10 an hour for my trouble. Eventually, I was offered an assistant manager position, which I declined. I wasn’t management material then, anymore than I am now. But I had a plan. I was going to be in the movies. Or, God forbid, on television.

I thought about all this last month when I saw “Boyhood” at a theater in San Francisco. I bought the tickets from a machine that took my credit card and spit out a piece of paper with a bar code on it. I walked inside, and fed the paper into another machine, which beeped twice, welcomed me in mechanical voice, and lowered a steel bar that let me into the lobby. No usher, no cashier. I found the concession stand and bought a bushel of popcorn from another machine, and a gallon of Diet Coke that I poured myself. On the way out, I saw an actual employee, who turned out to be the manager. I asked him how much a projectionist was making these days, and he just laughed.
“There’s no such position,” he said. I just put the film in the slot myself and press a button. Easy breezy.”

To answer your question Darrell, I’m worried. From the business owners I’ve talked to, it seems clear that companies are responding to rising labor costs by embracing automation faster than ever. That’s eliminating thousands of low-paying, unskilled, entry level positions. What will that mean for those people trying to get started in the workforce? My job as an usher was the first rung on a long ladder of work that lead me to where I am today. But what if that rung wasn’t there? If the minimum wage in 1979 had been suddenly raised from $2.90 to $10 an hour, thousands of people would have applied for the same job. What chance would I have had, being seventeen years old with pimples and a big adams apple?

One night, thirty-six years ago, during the midnight showing of The Rocky Horror Picture Show, I sat in the projection booth and read a short story by Ray Bradbury called “A Sound of Thunder.” It was about a guy who traveled back in time to look at dinosaurs, but against strict orders, ventured off the observation platform and accidentally stepped on a butterfly. When he returned to the present, everything in the world had changed. “The Butterfly Effect” is now an expression that describes a single event that leads to a series of unanticipated outcomes, resulting in a profoundly unintended consequence. (Ironically, it’s also a movie with Ashton Kutcher, which I had to pay to see 30 years later.)

Anyway, I’m not an economist or a sociologist, but I’m pretty sure a $20 minimum wage would affect a lot more than the cost of a Big Mac. Beyond the elimination of many entry-level jobs, consider the effect on the skills gap. According to the BLS, they’re about three million available positions that companies are trying to fill right now. Very few of those jobs require a four-year degree, but nearly all require specific training. And all pay more than the current minimum wage. If we want a skilled workforce, (and believe me, we do,) should we really be demanding $20 an hour for unskilled labor?

Last year, I narrated a commercial about US manufacturing, paid for by Walmart. It started a shitstorm, and cost me many thousands virtual friends. Among the aggrieved, was a labor organization called Jobs With Justice. They wanted me to know just how unfairly Walmart was treating it’s employees. So they had their members send my foundation over 8,000 form letters, asking me to meet with unhappy Walmart workers, and join them in their fight against “bad jobs.”

While I’m sympathetic to employees who want to be paid fairly, I prefer to help on an individual basis. I’m also skeptical that a modest pay increase will make an unskilled worker less reliant upon an employer whom they affirmatively resent. I explained this to Jobs With Justice in an open letter, and invited anyone who felt mistreated to explore the many training opportunities and scholarships available through mikeroweWORKS. I further explained that I couldn’t couldn’t join them in their fight against “bad jobs,” because frankly, I don’t believe there is such a thing. My exact words were, “Some jobs pay better, some jobs smell better, and some jobs have no business being treated like careers. But work is never the enemy, regardless of the wage. Because somewhere between the job and the paycheck, there’s still a thing called opportunity, and that’s what people need to pursue.”

People are always surprised to learn that many of the subjects on Dirty Jobs were millionaires – entrepreneurs who crawled through a river of crap, prospered, and created jobs for others along the way. Men and women who started with nothing and built a going concern out of the dirt. I was talking last week with my old friend Richard, who owns a small but prosperous construction company in California. Richard still hangs drywall and sheet rock with his aging crew because he can’t find enough young people who want to learn the construction trades. Today, he’ll pay $40 an hour for a reliable welder, but more often than not, he can’t find one. Whenever I talk to Richard, and consider the number of millennials within 50 square miles of his office stocking shelves or slinging hash for the minimum wage, I can only shake my head.

Point is Darrell, if you fix the wage of a worker, or freeze the price of a thing, you’re probably gonna step on a few butterflies. Doesn’t matter how well-intended the policy – the true cost a $20 minimum wage, has less to do with the price of a Big Mac, and more to do with a sound of thunder. Frankly, it scares the hell out of me.

PS I looked into the Freedom Socialist Party and their demand for a universal, $20 an hour living wage. Interesting. You’re right – they’re serious. But not long after they announced their position, they made the interesting decision to advertise for a web designer….at $13 an hour. Make of that what you will.

5 thoughts on “Off The Wall: Minimum Wage”