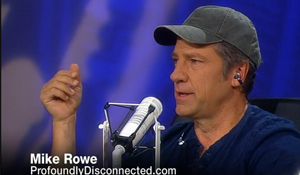 Mike Rowe is one of Glenn’s favorite guests to have on radio, for a variety of reasons. First, Mike is one of the seemingly few leaders left on the planet who values hard work. He also isn’t afraid to speak his mind and doesn’t fold like a cheap tent when he gets some public pushback over a particular opinion. Special bonus: Mike sings some decent opera. On radio this morning, Mike opened up about how he got started on TV and the origins of his new show Somebody’s Gotta Do It.

Why did Mike Rowe pick up opera?

“Well, I was living in Baltimore, which is a weird town vis-à-vis the unions. Right? So SAG and AFTRA,”

“Maryland, not so much. I needed both of those cards to work in my chosen field. And I couldn’t get those cards unless I did union work. But I couldn’t do union work without those cards. Classic catch-22. There’s also a loophole. There was another guild called AGMA, which is the American Guild of Musical Artists. If you can get yourself into any of the aforementioned acronyms, you can buy your membership into any of the sister unions.”

“For me, it became simpler to learn an aria and try to smoothy-boot my way into the opera union than it was to check the want ads for, you know, openings in TV. So that’s what I did. I learned the shortest aria I could find. Puccini. La bohème. The Coat Aria. I walked around for a month with my Walkman on, singing it, which I looked like an insane person walking the streets of Baltimore.”

“But it’s one of the shortest ones I could find. And I auditioned. And the guy said you have no idea what you’re doing, do you? And I said, no, none. And he said you have a rich, well-modulated baritone. We’ll dress you up as a pirate. I got in the opera. I got my card. I figured I’d buy my other cards. But the truth is, the music was a lot better than I thought it would be. And the rep company was a fascinating little microcosm of men and women, 45 women, 35 men. Thirty of the men had zero interest in 100 percent of the women. The remaining five men — of the remaining five, three were married, and the other one was my buddy Rick, and he had a mole on his eyelid the size of your thumb with thick black hair growing out of it.”

“So basically I’m 22. I’m single. I’m dressed like a pirate, and I’m singing Vivaldi. It is 1984. I stayed seven years in the opera.”
How did Mike Rowe get started with Dirty Jobs?

“Dirty Jobs happened because I’m in this freelance mentality. It’s after the opera. It’s after Home Shopping. It’s after ten years doing a thousand jobs. Six months on, six months off a year. I’ve got it all figured it out. I’m Travis McGee from John D. MacDonald’s. Great series. I’m taking my retirement in advance. I don’t care about the job. I care about the amount of free time I have.”

“Dirty Jobs happens because my granddad gets sick, and he’s a guy who built my house without a blueprint. The one I was born in. He never seen anything on TV that looked like work.”
“So I said, before you die, it would be great if I did something that you would at least recognize as vocational. That’s what started Dirty Jobs. It was supposed to be three one-hour specials. 10,000 letters later, after the first airing, I realized everybody had a story about work. The network realized it too.”