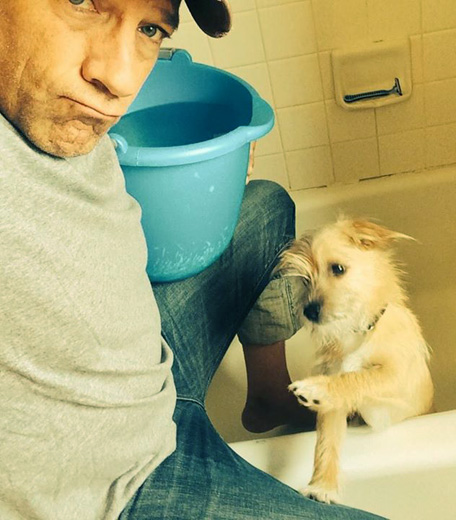 “Hey Mike!! Charlie Willis challenges you to do the ALS Ice Bucket Challenge! He did it & donated so come on!!!” Posted by Mary Willis

“We’re waiting, Mr. Rowe. You’ve been challenged over and over. What’s the hold up??”
Posted by Maxine Allen

“I’ve challenged you twice now. Since you have not responded by video, I certainly hope you’ve already donated.” Posted by Pia Yoacham

“DUDE. ARE YOU GONNA TAKE THE CHALLENGE OR NOT!!!!!” Posted by Charlie Baker

“It’s my understanding the person challenged has 24 hours to respond. Wonder why the coyness? But, maybe the coyness is the answer…and the answer is No?” Posted by Wanda Manning

Since yesterday was apparently National Dog Day, (seriously?) and since my second-to-the-last post triggered a variety of observations around my apparent failure to “rise to challenge,” as it were, I’m weighing in with another image of young Freddy, who like his master, has decided to forego The ALS/Ice Bucket Challenge.

I mean no disrespect to the 500 or so individuals who have publicly challenged me to participate. And God knows, I’m in near constant need of a cold shower. But as a guy who has represented some rather large, profitable companies while running a non-profit foundation, I’ve got some opinions on the subject of persuasion, especially as it applies to fundraising. And I’ve been struggling with how to share those thoughts in a way that will not make me look like a douche-bag.

First of all, I tip my hat to the marketing genius that conceived of this device. Thanks to The Ice Bucket Challenge, The ALS Association has collected $75 million dollars in donations. That’s up from just $1.9 million over all of last year, for a 3,650% increase. That’s amazing, and totally unprecedented. And if we lived in a world of unlimited philanthropic resources, it would be fantastic news. But we don’t live in that world. We live in a world where generous people of finite means must allocate their charitable giving with discretion – in the same way they allocate all other expenditures. In this world, more money for ALS means less money for Heart Disease. More for Malaria means less for Diabetes. More for AIDS means less for Alzheimer’s. And so forth.

It’s not exactly a zero sum game, but the cannibalism factor in charitable giving is a very serious problem. According to the experts, 50% to 70% of all the money collected as a result of the Ice Bucket Challenge will directly impact future contributions to other charities in an equal and opposite way. In other words, if The ALS Association collects a $100 million – as it’s on track to do – other charities competing for the same dollars will collect between $50 and $70 million LESS. Thus, the largest donations do not necessarily go to those charities that serve the most people or do the best research – they go to those that who market themselves in the most effective way.

This informs the way I give, and the way I solicit. It’s one thing to sell cars or trucks or jeans or paper towels. God knows, I’ve been there, and I’m comfortable with the consequences of pushing one brand at the expense of another. But in the non-profit world, the stakes are bit higher. I’m reluctant to participate in a challenge that’s raising so much money for a small association, especially when it impacts other research that will eventually save the lives of millions. That’s the cold and shitty calculus of charitable giving.

Of course – I understand those who see it differently. If my Dad or my brother was among the 6,000 diagnosed with ALS every year, I’d be standing under a shower of freezing water, waving my checkbook in the air and challenging the world to get on board. I remember when my Mom was diagnosed with breast cancer – I would have done anything to fix it. In fact, took off my pants and challenged the world to donate the cost of their favorite pair of jeans to help find a cure. I get it.

But here’s the thing – if you decide to give charitably, it’s important to understand everything you can about the way your money is going to be spent. That’s not happening here. The spectacular success of the Ice Bucket Challenge is not the result of a conscious, collective commitment to rise up against a terrible scourge; it’s the result of a marketing campaign. Consequently, a foundation accustomed to working for decades on a million dollars or so in annual donations, will now have to manage a $75 million jackpot. That worries me, as it should anyone who has ever studied the fate of lottery winners. That’s not their fault, but it doesn’t change the situation, and I’m not inclined to challenge more people to send more money to coffers that are already overflowing.

Some of you will remember a recent post about my friend, Jill Brown. Jill is a stuntwoman who got a brain tumor and lived to tell the tale.

Last year, she asked me to sponsor her in a walk to raise money for brain tumor research. She didn’t like asking, and I don’t blame her. Asking people for money is never fun. Even for a good cause. But Jill was very grateful for a second chance at life, and determined to support those suffering from the same condition that she overcame. So she personally called everyone she knew and explained why she walking, how the money that she raised would be used, and why the research was so important. Consequently, she raised a tidy sum for a great cause that was near and dear to her.

Point is, Jill did several difficult things. She vowed to walk, at a time when walking wasn’t so easy. She committed her time, her energy, and her passion to a cause that mattered deeply to her. And most importantly, she made the whole thing personal. That made me want to help her. Not just because she’s my friend – but because she was helping herself.

The Ice Bucket Challenge is different. Here, people I’ve never met give me 24 hours to either write a check to a charity I’m not familiar with, or dump a bucket of cold water over my head. Tell me honestly – if that precise challenge arrived to you privately, via the US Mail, what would you do with it? You’d throw it in the trash, right? But a public challenge is not so easy to ignore. Online, everyone is watching. Your friends. Your co-workers. Your clients. Maybe even your boss.

When it comes to asking people for help, I don’t like to put them in an awkward position. So the only challenge I’m issuing today is to Freddy. If he can refrain from peeing on the floor, I’ll send a check to the local shelter. Beyond that, I’m staying dry.

Again – to anyone who’s been affected directly or indirectly by ALS, my heart goes out to you. And to those who challenged me personally, I know your heart’s in the right place. So I’m going to reserve the right to dump various substances over my head at a future date for whatever reason I deem appropriate, and encourage you all to ignore the gimmicks, get informed about the charities you wish to support, and contribute generously to whatever cause resonates with you.