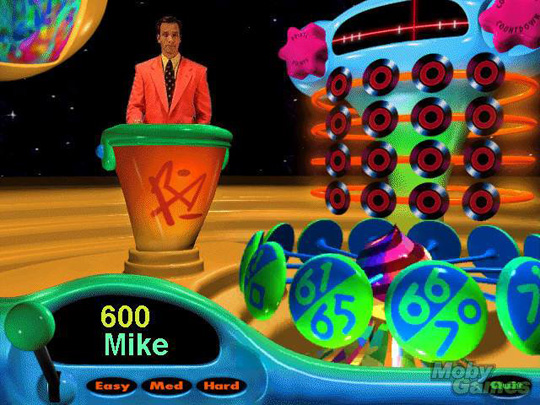 Yeah, that’s me, doing my best impression of a game-show host, and wearing a jacket whose color might be best described as fuchsia.

The year was 1993, and while I can’t say I was in desperate straits, I was certainly not in a position to pick and choose my next gig. I had just been fired (for the third time) from my job at QVC, and was entering the freelance world of television with some dubious bona fides and a willingness to do whatever it took to pay the bills.

And so it came to pass that I auditioned for and won the coveted the role of Bobby Arpeggio, the central figure in what the producers called “the first truly interactive gaming experience designed exclusively for the personal computer – the music trivia adventure called Radio Active!” (I called it “Name That Tune,” but whatever.) I packed a bag, flew to San Francisco, and slipped into the wardrobe that was waiting for me. A week later I had a check in my pocket, and was off to the next gig.

To be honest, I had completely forgotten about this particular notch on my resume, and would have probably never thought twice about the job (or the jacket) had it not been for Guy Tautenhahn. Guy is one of 40,000 new friends I made yesterday, sent here from the Glenn Beck radio program to offer his support for the mikeroweWORKS Foundation and say a few encouraging words.

But Guy took it a step further. Apparently, Guy is one of several dozen people to have actually purchased a copy of Radio Active nearly 20 years ago, and he took the occasion to prove it in a way that leaves absolutely no room for ambiguity.

When I saw this image, mixed in with all the other kind expressions of support, it made me laugh out loud, and reminded me that when a man can’t deny his past (or his outfit), he might as well embrace it.

It also reminded me that in today’s job market, the thing that matters most is a willingness to be a little uncomfortable. To do what you have to do in order to get to whatever is next. To slip into the wardrobe that’s waiting. I used to think I learned that lesson on Dirty Jobs with Mike Rowe. But looking at this photo, it’s entirely possible I learned it many years before that, on a shiny set in San Francisco, wrapped snugly in a polyester nightmare whose color does not occur in nature.

Regardless, thanks, Guy, for this. And thanks to everyone else who stopped by over the last 24 hours and said some kind words.