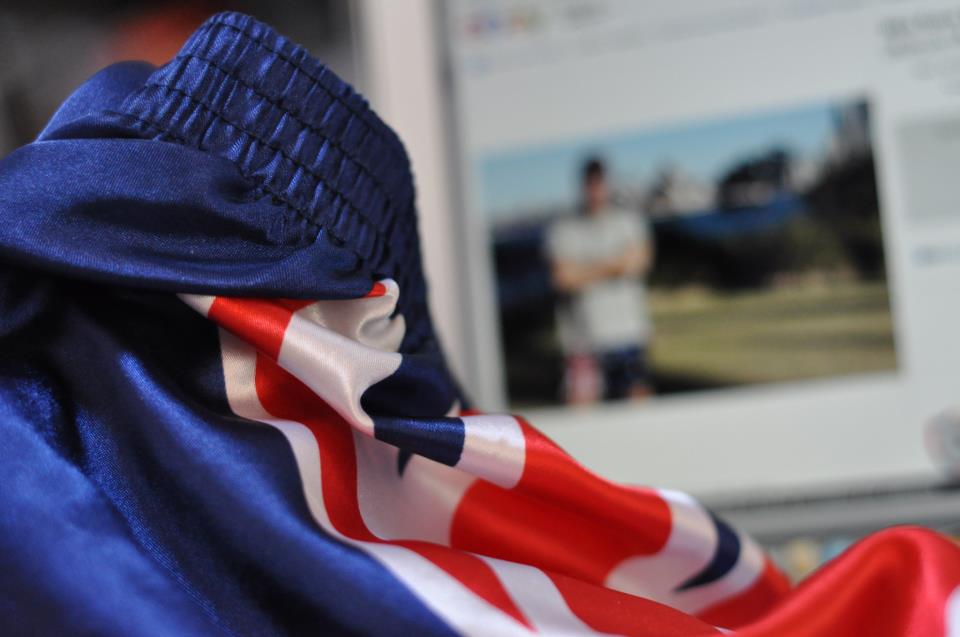 So I’m hanging out on the discount rack of this trendy boutique in Sydney, chatting with the hosiery and feeling sorry for myself. Sure, I might look like fine silk, but really, I’m just another swatch of polyester, transformed by some anonymous Chinese worker into a medium-sized pair of novelty underpants, emblazoned with the Australian flag, and shipped off to a country where many still consider undergarments to be “optional.”

I had started out in the front window nearly six months ago, covering up the imaginary genitals of a mannequin that looked like Ricky Martin. At $39.95, no one had looked twice. But back here, with a “Save 80%” sign over my head, people were taking notice, and I was pondering the identity of my inevitable owner. Would he be a patriotic rugby player? A post-modern hipster? Or maybe a Kiwi on holiday with a confused sense of nationalism? (Please God, not a Kiwi.) Either way, I knew the score. My destiny was written in the stains and skid-marks of unpredictable sphincters, and just because I looked like a flag, no one was ever going to salute me. My call of duty was in “arrears,” as it were, and I had accepted my fate long ago.

But then, The American showed up, and everything changed.

He was a big fella in a big hurry. With barely a glance at my price tag, he yanked me off my hanger and walked me straight back to the nearest dressing room. There – against strict store policy – he dropped his pants and tried me on. “Is he serious? Does this guy really think he’s a medium?” Like a sausage threading a needle, he eventually got his arse through my waistband, and admired the results in the mirror. God help me, he looked pleased.

After that, things happened fast. The American pulled off my tag, put on his pants, paid the clerk and went on his way. I spent the next few hours in the dark, smothered in confusion and humidity. Then, with a blinding flash of light, he dropped his pants again, and there I was – out in the sunshine, surrounded by dozens of people – totally exposed!

We appeared to be on some sort of movie set. All around us, people were pointing cameras and making a great fuss. Reporters shouted questions and The American shouted back answers. A large group of tourists gathered, waving and shouting in our direction. Then a make-up lady rushed in to apply powder. A director yelled “Action!” and The American began to speak to the camera. I had no idea who this guy was, but he seemed important, and I was the only thing between his privates and his public! I must confess, the attention was intoxicating.

A few minutes later, someone yelled, “Cut!” and just like that, it was all over. My new master walked into a trailer, pulled me off, and tossed me in a bag with half a dozen gray Jockey shorts. The letdown was palpable. I’d had a taste of the big-time, and I wanted more. I lay there amidst the Jockeys (who, I’ve come to realize, are jealous), and tried to make sense of all that had just happened. Eventually I nodded off, and like Dorothy, I awakened 10,000 miles from home in a different kind of Oz – a magical place called San Francisco. And that’s when things got really weird.

I hadn’t showered in, well … forever, but The American pulled me out of the bag and slid into me once again. (Still not a medium!) Just like last time, he threw some pants over my head, and things went dark for a while. But this time, my heart was racing. Were we off to another film set? Was this to be my regular job? Would I need an agent? Sure enough, after a few hours of muffled sounds and some periodic adjusting, The American once again dropped his pants and started talking.

This, however, was an entirely different setting. There was a camera, but it was much smaller than the last one, and held by a young woman who called herself “Kristen.” No one else was in the room. The American talked directly to the camera, and I realized with amazement that he was talking about me! He appeared to be asking an unseen audience to purchase me.

Good God! I was being sold! Again!!

I was devastated. What did I do wrong? How have I disappointed my new master?” As I listened carefully, I heard The American say words like “foundation,” and “scholarships.” It was as though he was trying to raise money for something, but that made no sense at all. In Sydney, my value was firmly established at $4.99. What could he possibly expect to get for a used pair of polyester boxers with a Blue Ensign on them? But then, things get downright bizarre. The American sat down behind his desk, and with the camera still rolling – he removed me altogether, leaving him … in the altogether!

“Whoa!” I thought. “What kind of film IS this?” The American held me out toward the camera, dangling me in midair. He said a few more things about “bidding irresponsibly” and “all for a good cause.” Then, he signed his name on my face. Kristen said, “Cut!” and just like that – it was over again! Seriously! Can this get any weirder?”

Well, the short answer is “yes.” Because right now, as I enjoy an afternoon beverage and look at myself on eBay, I see that I’m worth a little more than $1,000! Un-fricking-real. (Granted, those are American dollars, but still, that’s a lot of cabbage.) Really, it’s hard to know what to make of all this. So I’ll just sit here a bit longer and reflect. Me, a humble pair of skivvies smuggled in from the land Down Under, contemplating the vagaries of fame, and pondering the identity of my next owner.

Who will it be? Will he be famous? Will he be rich? Will he be a legitimate medium? That would be nice. Or maybe – just maybe – he’ll be a woman?

Now that’s a master I can get behind …