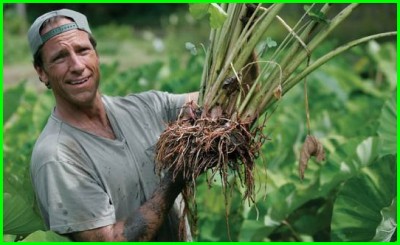 To everyone who has ever felt guilty about not having a career plan, look to Mike Rowe and hold your head high. Here’s a man who admittedly – and consciously – has lived a “go with the flow” life, and made it work remarkably to his advantage.

Even without a clear-cut occupational strategy, attributes like flexibility, spontaneity and healthy doses of natural talent and charm have made it possible for Mike Rowe to find success in an impressive range of performance venues. Even those who may not recognize the name most certainly will find his face and baritone voice immediately familiar.

From humble beginnings in school plays and community theater productions, CCBC Essex alumnus Mike Rowe has plied his talents on stage, in front of the camera and behind the microphone. He helped create and has been the affable host of “Your New Home” on Sunday morning local television for 15 years, and was regularly seen chatting with Epic Pharmacy customers in the company’s long-running series of TV commercials.

Mike also cultivated quite a viewer following during a three-year stint selling diamonds – among other things – on QVC, and recently entertained Bay Area audiences as host of San Francisco’s Evening Magazine. For the popular Discovery Channel, Mike hosted Egypt Week Live! in the Valley of the Golden Mummies, working with archeologists as they opened ancient tombs live on the air.

Behind the microphone, Mike Rowe is just as versatile and prolific. He’s narrated more than 1,000 hours of television programming, including Ghost Hunters on Sci-Fi, Ultimate Fighter on Spike TV, as well as American Chopper, American Hot Rod and Southern Steel (all on the Discovery Channel).

In 2005, Mike celebrated the debut of his own Discovery Channel series, Dirty Jobs. The program airs Tuesdays at 9 p.m., and takes an up-close (sometimes too close) look at all of the jobs people do so the rest of us don’t have to.

The path from an eastern Baltimore County suburb to the tombs of ancient Egypt was not laid out according to any plan. In fact, little that Mike Rowe does is scripted … literally and figuratively.

Emerge: How would you describe your childhood in Baltimore?

Mike Rowe: Unique. I grew up with a lot of room to wander and roam. My folks had some property that backed up against several hundred acres of dense woods that was owned by the state. It felt like the middle of nowhere. In reality, it wasn’t far from [then] Essex Community College, and maybe a mile from the city line.

E: Do you come from a theatrical family?

MR: My dad has appeared in over 100 plays in community theatre throughout Maryland, and still performs with the Senior Star Showcase at CCBC Essex. My mom plays the piano, and sings in the church choir. Both taught public school.

E: What was your first professional gig?

MR: A commercial voiceover for Mattress Discounters in 1980. My music teacher at Overlea High School – Fred King, “King of the Barbershoppers” – turned me on to voiceover work. I had a rather low voice, and Fred told me I could use it to make a little money on the side. “No one will know how old you are,” he said. He was right. We sent out a tape and I got the job.

E: Ever named “most likely” to do something?

MR: According to my high school yearbook, I was voted most likeable. Of course, that was 25 years ago. And I may have voted for myself.

E: What led you from Overlea High School to CCBC?

MR: To be honest, it was very cheap and very convenient – appealing qualities for a guy with no discernable career path. I am baffled by anyone who knows what they really want to do after graduating high school. I know a lot of people who enrolled in four-year universities way too early, majored in the wrong thing, and spent years trying to “be” whoever it was they had planned on turning into. For me, Essex was a good place to catch my breath and figure it out. It helped me narrow things down.

E: Is there any particular CCBC instructor or experience that had a long-lasting impact on your life?

MR: The theatre department was memorable. Scott Black and J.R. Liston were teachers that left an impression. Scott created a fascinating microcosm of the theater world, and accurately showed what that world would be like if you pursued it as a vocation.

E: What types of jobs did you have during and after college?

MR: In college I sold magazines over the phone. Forgive me, but I was really pretty good at it. After graduating from Towson, I sold service contracts on personal computers for a few years. Those jobs were important because I learned that it was possible to make decent money doing something that I didn’t particularly enjoy. That worried me.

E: When did you realize that you could actually make a living in front of the camera and behind a microphone?

MR: When “Blossom” went into syndication.

E: You’ll have to explain that one.

MR: What I mean is that the field is wide open and the possibilities are endless. I never had a confidence problem – always had a lot of positive feedback, quite a few voiceover jobs, parts in plays, etc. I managed to get an audition with the Baltimore Opera Company, figuring it was a way to get my AGMA [American Guild of Musical Artists] card; then I could get my SAG [Screen Actors Guild] and AFTRA [American Federation of Television and Radio Artists] cards. That was pretty much the only time I had any semblance of a career plan.

E: So there was no conscious drive to become host of your own TV show?

MR: All I knew for certain after college was that I didn’t want to sit behind a desk, and I didn’t want to commute in rush hour. The notion of a career was just too big, so I settled for short-term jobs. I guess after 20 years and several hundred TV-related jobs, it might look as though I had a career plan. I didn’t.

E: Have you ever worked a typical day job?

MR: No thanks. The computer thing was technically full-time, but my attendance record would suggest otherwise. Today, I often work 70 hours a week, but I never work 9-to-5.

E: How did you make the leap from local performer to instant celebrity on QVC?

MR: I was in a production of Tosca at the Lyric, and enjoying a beer with a friend of mine during intermission. (It’s fun to drink and sing Puccini.) We were across the street in the Mt. Royal Tavern, and the TV was turned to QVC.

My friend found it disturbing that people would buy fake diamonds from complete strangers in the middle of the night. I pointed out that we were wearing togas and carrying swords in broad daylight, and that some people might find that disturbing. Anyway, the bartender chimed in and said QVC was holding auditions later that week in the Inner Harbor. I crashed the audition and got hired on the spot.

E: Has your quick wit and talent for snappy repartee ever gotten you into trouble?

MR: I was fired twice from QVC, and spent most of my three years there on double-secret probation. I can’t say for sure that wit was the cause.

E: You do a lot of voiceover work. What’s the best part about that aspect of your career?

MR: I like long form documentary. I did a 10-hour series on commercial crab fishing for Discovery called The Deadliest Catch, and really enjoyed telling the story. In general though, voiceover is great because it’s creative, anonymous, efficient and profitable. It’s also insanely competitive, and a lot harder than you think.

E: How did the idea for Dirty Jobs come about?

MR: I was hosting Evening Magazine in San Francisco, and started profiling local people who had disgusting but important jobs. The idea was to offer my services as an apprentice, and show the viewer, through my bumbling and often disastrous efforts, just how difficult the work is. The segment became popular, and I sent one of the more memorable ones – artificial cow inseminator – to the Discovery Channel. They ordered a series.

E: What’s the dirty job you would never even consider doing again?

MR: A dozen come to mind. But if you want just one, I’ll go with catfish noodler. Noodling means fishing with your bare hands, usually in a swamp or bayou. The noodler typically stands in four to five feet of fetid water, running his hands through black, smelly, oozy mud, searching for a hole where a catfish of indeterminate size may be sleeping.

This is done with the intention of provoking the fish into biting the hand of the noodler, at which point the noodler will attempt to grab the fish by the jaw, and pull it from the mud barehanded. (I swear this is true.)

It is a surprisingly efficient way to fish, but in my opinion, a surprisingly stupid one as well. Where there are catfish, there are also alligators, copperheads and snapping turtles. All noodlers have multiple scars, and only a few have all their fingers.

E: Have you ever been in the middle of a dirty job and realized, “This isn’t as bad as I thought it would be?”

E: Is there one that was a lot worse than you anticipated?

MR: Bat biologist. The largest concentration of mammals in the world can be found in Bracken Cave, in the form of 40 million Mexican free-tail bats. Once a month, a biologist named Jim Kennedy goes deep into the cave to check on the health of the colony. (Bats apparently, are very important to the environment.)

Anyway, the air in Bracken Cave is toxic with ammonia, so we don gas masks. On the ground lies tons of moist guano, which Jim and I must wade through. In the guano live billions of flesh-eating beetles, waiting for bats to plummet from the ceiling and perish in their own excrement. The bats themselves are highly agitated by our presence, chirping wildly, and covering us in a steady rain of urine and poop. They are also giving birth, and peppering me with placentas. Bracken Cave is a dirty, dirty hole.

E: How do you come up with ideas for the show?

MR: I make a list of things I would never want to do.

E: Is anyone ever offended that you think his/her job is dirty enough to make for interesting TV?

es are usually flattered. On the other hand, corporations, like sausage makers for instance, are hesitant to associate their brands with dirt and filth.

E: Do all of your wildly varied experiences make you the “Cliff Claven” of your social circle?

MR: I am a good and dependable Trivial Pursuit partner.

E: Which one of your experiences has most freaked out your parents?

MR: I once used a garden shovel to remove hundreds of pounds of coagulated grease from the walls of a waste pumping station in Wisconsin. The job required me to wear a rubber suit and stand in a well of human waste. My father hasn’t quite gotten over it, and my mother won’t discuss it.

E: Do you have any advice for aspiring performers?

MR: Yeah. Don’t take any advice. In this business, there is no straight line to follow and no justice at all. Most everyone I know who does what I do will struggle all their life to stay even. And the few who have done OK, including me, have no idea why. We’re just guessing, and like to sound smarter than we are.

E: What’s left on your list of things to do or places to go?

MR: Happily, that particular list is in the process of being revised.