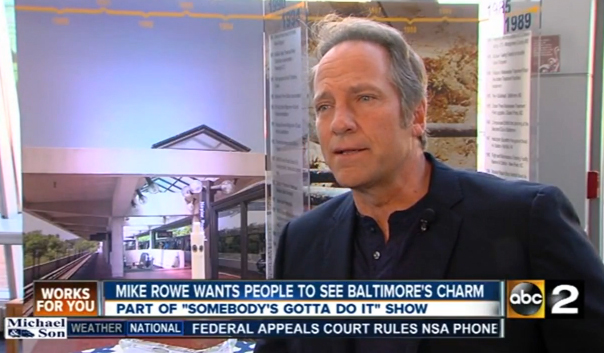 BALTIMORE – Mike Rowe’s show ‘Somebody’s Gotta Do It’ highlights people who do unique jobs, and on Thursday night’s episode that aired on CNN, two of those people hail from right here in Baltimore.

The Charm City is also Rowe’s hometown, and it holds a special place in his heart. That’s why he hopes the turmoil and challenges going on in our streets won’t take a massive chunk out the city’s identity.

“The real question to me is how do you compete against that, how do you let Joe and Marge from Idaho know that this is a big city with obvious challenges, but with a whole lot more to offer,” he said.

When the cameras are rolling 24/7, seeing crooks loot family owned businesses, and cars burning in the streets can do a lot of damage to a city’s image. So while Baltimore, state, and federal officials work on the challenges in our neighborhoods, Rowe is trying to use his show to even out what people see on their screens about our city.

“This town doesn’t need a spokesman; they already have them, the people that are here,” said Roswe. “So giving them enough runway to make their case is the goal.”

Rowe just wants people to know there is more to Baltimore then crime and drugs and unrest.

Rowe is also involved in a locally produced PR campaign with Julie Bowen, Cal Ripken Jr, rapper Common, and a few other famous faces called My Bmore. That campaign, and some other locals will be featured on Sombody’s Gotta Do It later in the season.