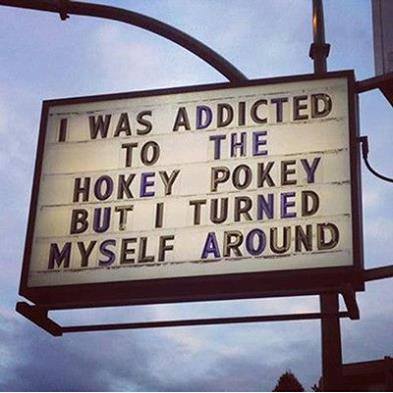 I’m amazed by what you’ve created here. It’s an inspiration to see how a guy who is really just being himself can generate this tsunami of love and admiration. But being yourself, as odd as it sounds, takes practice. It takes knowing who you are, as Socrates says. This seems to be what you have done. Do you have any thoughts on what it takes to be yourself, the practice of it, the work of it? As paradoxical as it sounds, do you think people need to spend more time “working out” their “true self muscles?”

Thanks for the kind words. It’s been fun to watch this place grow, and while I’m flattered by your suggestion that “being myself” is the sole reason, I’m afraid you may have overestimated my natural charms. Like most people on Planet Earth, I was born lazy, helpless, greedy, and selfish, and I’m pretty sure I’d still be that way if my parents hadn’t insisted I become something less obnoxious. The degree to which they succeeded is debatable, but with respect to the whole nature/nurture conversation, one thing has become obvious to me over the years – being myself is easy. Being someone better is not.

There’s an old comedy bit that goes like this:

First Guy: What is it about cocaine that makes it so wonderful?

Third Guy: Yeah, but what if you’re an asshole?

Existentially speaking, the Third Guy makes a point worth pondering. Why do we assume that all personalities will benefit from being intensified? Moreover, what happens when a genuine asshole is encouraged to be himself?

Millions of people are convinced that something good and virtuous resides in each of us, just waiting to be discovered and explored. They spend billions of dollars searching for their “true self,” secure in the knowledge that finding it will put them on the path to becoming the best person they can possibly be. But remember what Socrates actually said – “the unexamined life is not worth living.” He didn’t say, “examining your life will automatically make you less of an asshole.”

I suspect Hitler knew exactly who he was, and acted accordingly. Likewise, I think Castro and Stalin were probably just “being themselves.” So too were Jim Jones, Pol Pot, Idi Amin, Lizzie Borden, Osama Bin Laden, and millions of lesser known creeps and villains currently serving time in prison for “working out their true self muscles.” Last I checked, our entire planet was bursting with billions of regular Jane’s and Joe’s who lie, cheat, gossip, steal, and then reflect on their bad behavior as anomalous or “out of character.” My philosophy is this:

If you want to be less of an asshole, stop acting like one. If you want more people to like you, do more likable things. Regardless of all the personal enlightenment, we’re not judged in this life by what we discover within ourselves or what we come to believe – we’re only judged on what we do.

But of course, what we do is not always consistent with what we say we’ll do, or who we claim to be. This goes to the role of authenticity, which is what I think you’re really asking about.

Authenticity is in short supply these days, and exceedingly valuable – especially in my industry. If people see me as authentic, they’re more likely to buy my book, watch my TV show, contribute to my foundation, and read my Facebook page. (More than a few have even offered to vote for me, even though I’m not running for anything but another season of gainful employment.)

It’s tricky though. To be truly authentic, you can’t worry about being liked. Otherwise, you’ll be seen as pandering. On the other hand, you can’t appear too indifferent, or you’ll be perceived as aloof. Authenticity requires a weird mix of consistency and apathy. This is the paradox you mentioned. And this is also why authenticity is easier for assholes than non-assholes.

Consider Simon Cowell. Simon made millions of dollars making teenagers weep on national television. He’s an asshole, no doubt about it. But he’s totally authentic. In a world where everyone gets a trophy, Simon told us the truth, and we responded to his honesty with a surprising mix of admiration and respect.

Charlie Sheen is another authentic asshole. Even as his name became synonymous with drugs and whores and bad judgment, his popularity grew stronger. Why? Partly because Charlie’s behavior in real life was consistent with his public persona. But mostly it was because he didn’t give a crap. In a world of forced apologies and carefully orchestrated mea culpas, Charlie Sheen laughed at network PR and traditional crisis management. Not a role model, necessarily, but undeniably authentic, and a breath of fresh air.

As long as you’re real, you can be authentic – even if you’re a fake. Jon Stewart for instance, is not an asshole. He’s the fake host of a fake news show on a comedy channel. And yet, he’s consistently rated as “more trusted” than any news anchor on any legitimate news network. Is it because he’s more accurate than Anderson Cooper? Less biased than Bill O’Reilly? No. Jon is often inaccurate and totally subjective. But he’s consistently “more trusted,” because he doesn’t ask us to trust him.

Thanks to Dirty Jobs, my public persona is very close to the guy I actually am. Consequently, I’ve gained a modest measure of authenticity, which I’ve leveraged as best I can. But it’s fragile. I pissed off a lot of people with that Walmart commercial last year. I’ve disappointed others with comments about unions, and offended God knows how many by simply talking to Bill Maher and Glenn Beck. Many have refused yo watch my show, simply because it’s on CNN. (Thursday’s at 9, April 9th!)

Just a few days ago, I posted a photo of two women who allowed me to literally paint their clothes on them. I thought it was tasteful and interesting, but 20,000 people disagreed, and unliked this page as a result. They felt that posting that photo was inconsistent with the person they thought I was. Personally, I thought I was just being myself.

To answer your question, Mystic, I believe the best way for me to work out the muscles of my true self is to make a conscious effort to do whatever it is I say I’m going to do. But that’s just me. To be clear, I would never encourage Kim Jong-un or the Mullahs in Iran or the leaders of the KKK to follow suit, because frankly, those people seem like world class assholes, and if they start acting on their beliefs, they’ll prove me right.

As for Facebook, I come here because I make my living in a world that’s profoundly contrived. Even when I’m as transparent as I can be, my words and actions are always edited or rearranged in some way. In a world where The Ducks have a Dynasty, The Amish have a Mafia, and trusted newscasters “misremember” life and death situations, it’s nice to have a place where you can be crystal clear about whatever needs clarifying. That doesn’t mean you should believe whatever I tell you, just because I say it’s true. As Travis McGee says – be wary of all earnestness. But if I can’t be authentic here, it’s nobody’s fault but mine.

Anyway, that’s enough navel-gazing on a foggy Sunday. Thanks for the question Mystic, and have yourself a self-actualized week.