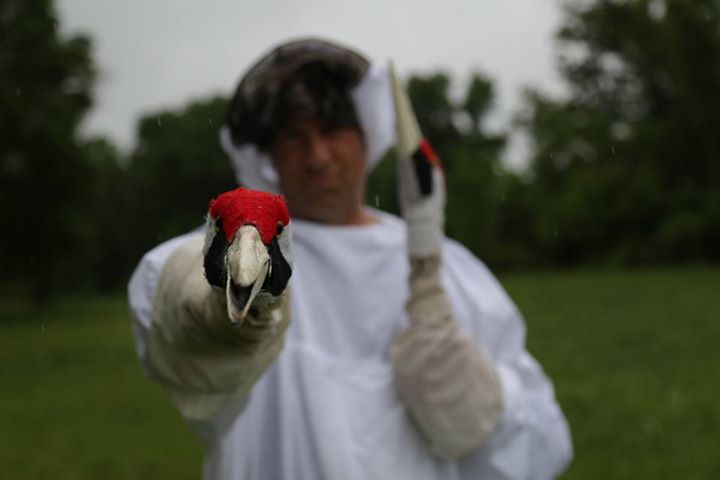 Ryan Thompson
October 17 at 11:21am · Chandler, AZ ·
“Hey Mike, love the new show……I watched the last episode with the cranes and the birds suits (little weird….but whatever). One question came to mind though – is that place funded privately or by the government? I kept thinking it’s one of those places that costs the tax payers millions each year to keep the doors open.”

Panier De Fraises
October 16 at 9:49am ·
“You did a disservice to Operation Migration and the whooping crane project on Somebody’s Gotta Do It. You came across as bored and disdainful. You say you work for the people who watch you and not the people who pay you — ok. You’re on probation.”

Fair enough. I’ve been on probation my whole career, and I’ll be grateful to remain there as long as you can tolerate me. But for what it’s worth, you’re mistaken. I was neither bored nor disdainful of anything I saw at The Whooping Crane Facility. In fact, I was genuinely impressed with Dr. French and his team, and glad to give their program some national exposure. Now it’s true – I didn’t swoon in their presence, or behave as though I agreed with every single thing I heard. Dr. French was very clear about why he does what he does – he believes the Whooping Crane has as much right to exist as we do. I doubt that everyone shares that view. Should they?

Whooping Cranes were nearly hunted into extinction, and left homeless as their natural environment was systematically eliminated by short-sighted Home Sapiens. Personally, that makes me sad and angry. Thus, I’m happy to shine a light on Dr. French’s efforts, and pay some money to see The Whooping Crane survive. But Ryan asks a very fair question. How much? More than the Spotted Owl? Less than the Whales? Should there be a limit on what we spend to save an endangered species?

Depending on your worldview, questions like these are annoying. But they are nevertheless important, because we’re all in this together. Is the Whooping Crane more valuable than the Snow Leopard? What about the Desert Tortoise? Or The Black Rhino? Exactly how bad are we supposed to feel when a species exits Planet Earth? Is it a tragedy? An ecological disaster? Or just a damn shame?

Lot’s of people are currently worried about overfishing – specifically, the depletion of the worlds tuna stocks. Some people are worried because they’re concerned about the rising price of tuna. Others are worried about it’s longterm viability as a delicious menu item. And others are protesting because they believe it’s morally wrong to eat them. The difference is important, because an individuals worldview will absolutely inform their opinion about basic conservation.

According to some other show I just narrated for some other channel, there are approximately 8.7 million species on the planet, give or take 1.3 million. (If a 1.3 million delta seems high, consider that the previous estimate put the number of total species on Earth between 3 million and 100 million, which is somewhat baffling in and of itself.) But here’s the most intriguing statistic – of the 8.7 million species now estimated to inhabit the planet, approximately 88% have yet to be discovered, described and cataloged. That strikes me as rather extraordinary.

Point is, you could fill a library with what we don’t know about biodiversity. And yet, many people have a deep and abiding conviction about the proper way to discuss the plight of endangered animals. You seem offended Panier, because my attitude did not reflect the seriousness that you believe this topic deserves. You weren’t alone. But consider – many others were equally offended because I gave a platform to man who believes that all creatures on the planet are entitled to the same right to exist as humans. A lot of people told me that with 7,000 children dying every year from hunger, the plight of the Whooping Crane was not worth my time. Thus, addressing this topic in a light-hearted television show is guaranteed to offend somebody.

If you watch the episode again, (assuming I’m still on probation,) I think you’ll see that we tried to focus on the human elements – the simple joy that Dr. French and his team take in their work, and the passion they bring to their job each and every day. Experts call it “congruency,” that rare and wondrous state that occurs when your beliefs and your actions line up perfectly, and net out in a vocation or avocation that you truly love.

Dr. French is first and foremost, congruent, and thus, perfectly suited for SGDI. Are his efforts worth the cost? Was I disrespectful? Is there no room for levity? Those are fair questions upon which reasonable people might disagree. But one things for sure – the cranes are damn lucky to have the good Doctor in their corner. And I wish them both every success.