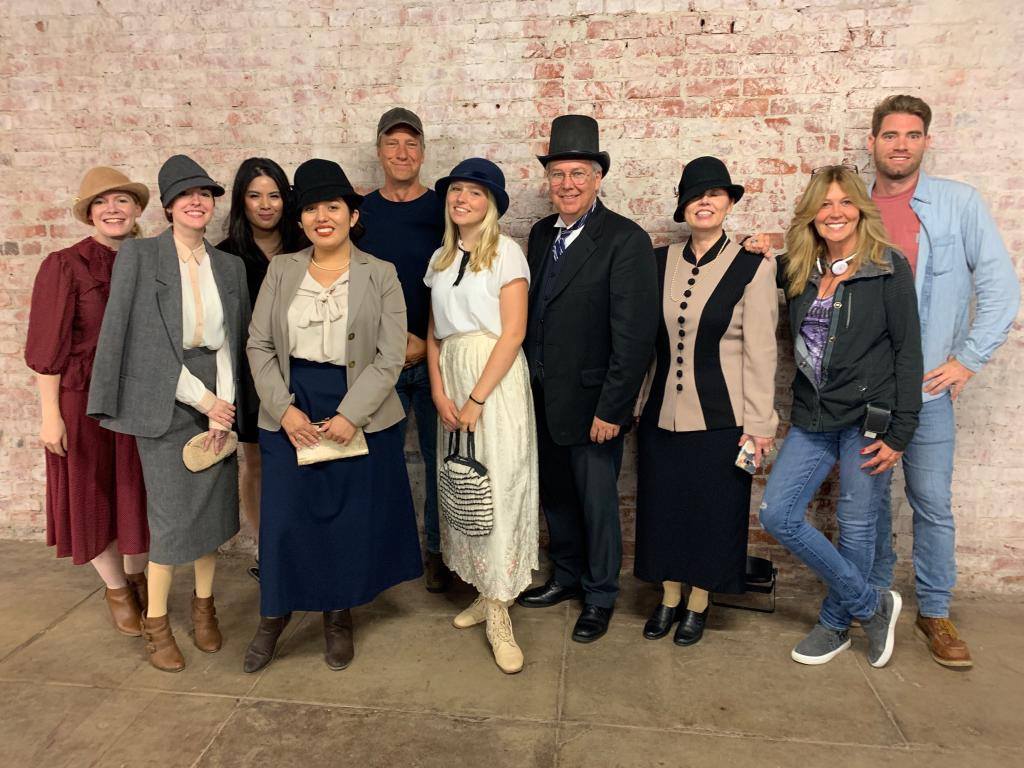 Well, let’s see. For starters, there’s WAY too many people standing WAY too close together. I know it’s Thanksgiving and all, but ten people standing cheek to jowl is totally irresponsible! Am I right? I mean, what would the Governor of California say? And what are those white things, glowing like pearls from beneath all those exposed nostrils? Are those…teeth? But wait…if those are teeth, that would mean…Oh…My…GOD…is no one wearing a MASK??? RUN FOR YOUR LIVES!!!!

Just kidding. This photo, as the wardrobe might suggest, was taken in simpler times. Last summer, to be specific, in the dog days of August, 2019. I was filming a series called Six Degrees, (coming this January, finally,) that requires me to travel through time and space to find the surprising connections from our past that make us who we are today. In the course of filming, I shanghaied the good people at mikeroweWORKS into playing extras in a recreation of the great San Francisco earthquake of 1906, and here we are, gathered together after the shoot. Now, as I consider the maskless faces in this photo, and the smiles of my loyal employees, I must confess that last August, feels like a century ago.

Can I get an amen?

Like most of you, I’ll be glad to get 2020 in the rearview mirror. But that doesn’t mean I don’t have blessings to count. Like it says in the S.W.E.A.T. Pledge, “I have won the greatest lottery of all time. I am alive. I walk the earth. I live in America. Above all things, I am grateful.”

I made that the first tenet of the Pledge, because it’s hard to feel lousy about anything when you’re grateful for what you have. When you’re grateful, you can’t feel sorry for yourself. You can’t feel angry. Or sad. Or bitter. Or frightened. Or resentful. Or envious. That’s the thing about gratitude – when you have it, there’s no room for anything bad. And when you don’t have it, there’s no room for anything good.

I won’t bore you with the many specific reasons I’m grateful to be hurtling through time and space with my fellow man, even in this most uncertain of years. But I will express my sincere appreciation to the people in this photo. So far, the mikeroweWORKS foundation has awarded nearly $5 million dollars in work-ethic scholarships to over a thousand people who wish to learn a skill that’s in demand. In other words, the people in this photo are making a real difference in the lives of others. And that too, is something to be grateful for, in this most unusual of years. A chance to make a difference. A chance to move the needle. A chance to help those who are willing to help themselves. A chance to smile, even if no one can see your teeth.

Happy Thanksgiving to you all.
And for crying out loud, don’t choke on your mask between bites!
Mike

PS. The pretty blonde standing next to me is not technically an employee of mikeroweWORKS. Her name is Makenna, she’s a minor, and she belongs to Mary, my business partner standing off to the right with the Farrah Fawcett hair. For the record, it was Mary who forced her daughter to dress like a runaway from Little Women, not me.
PPS. The pretty brunette to my right, squinting skeptically at the camera, is Jade Estrada. Jade looks skeptical because she is skeptical, which is precisely why she’s in charge of my office, and reluctant to wear clothes from another century.
PPPS. The pretty women in the funny hats surrounding Jade are Libby, Lara, and Melanie. Among other things, Libby is in charge of making sure I’m on the right flight, on the right day, and headed to the right city. She doesn’t know it, but she’ll be pregnant shortly after posing for this photo, and go on to have a beautiful baby in the middle of the plague. Congratulations Libby! Lara and Melanie, on the other hand, know pretty much everything, including how to operate all the technology in my office that I don’t pretend to understand. God Bless them both!
PPPPS. Standing to the right of Mary, (my partner with the Farrah Fawcett hair,) is Taylor Wooten, who some say is even more glamorous than Mary, and blessed with a head of hair no less remarkable than hers. I don’t know about all that, but he is an excellent cameraman who I’ve come to rely on extensively. To Mary’s right, is Shari Lobdell, an early fan of Dirty Jobs who asked me to hire her many years ago, which I did, to my great good fortune. Here, her eyes are closed, because she is sleeping.
PPPPPS. The guy in the top hat is my old buddy Chuck, who many of you already know. Chuck plays no less than 35 historical figures in the aforementioned “Six Degrees with Mike Rowe.” (More on that later.) Chuck doesn’t know it, but shortly after this photo was taken, he will look at the image in horror, consider his expanding girth, and resolve – just as I did the year before – to lose thirty-five pounds, which he managed to do during Covid. Nice job, brother. Now pass the gravy…