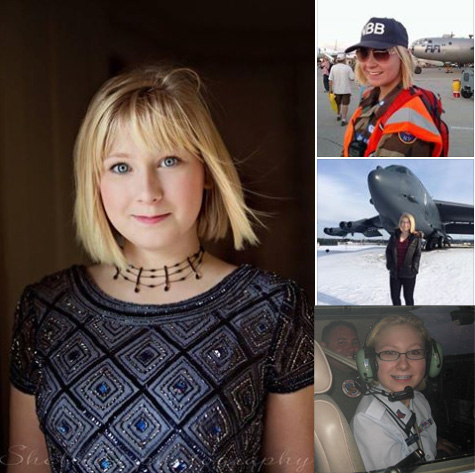 Every week, Chuck writes a short profile of a mikeroweworks scholarship recipient. Some of them have almost no spelling mistakes. Others are downright inspirational. This one, as far as I can tell, checks both boxes. Though I could be rong….

Kristen Blue has always loved airplanes – a lot. She had flown in big commercial airliners but was really fascinated by small Cessna planes. At age 12 Kristen learned of the Civil Air Patrol, or CAP. CAP is a civilian auxiliary of the United States Air Force. They have a cadet program that focuses on aviation, search and rescue training, and community service; but best of all – they have a fleet of Cessnas to train in.

“I think my love for aviation started when I found out that joining CAP would give me the chance to fly in a Cessna!”

Naturally, Kristen signed up. And she loved it. Not only did she get to fly in a Cessna (which was bumpier than she expected) she got to participate in a real search and rescue, helping to find a lost elderly man. However Kristen didn’t think about a career in aviation. In fact while attending Pavilion Central High School, she was splitting time with a BOCES program studying Environmental Science. While Kristen wanted to pursue Environmental Science, ultimately she realized that this career path would require a four-year degree and the job prospects beyond graduation were not that great. So she started exploring her options.

At BOCES, Kristen got the chance to shadow at a local aircraft mechanic shop called Boshart Enterprises & Aircraft Services, Inc.

“I absolutely loved what they taught me there.”

Kristen loved it so much she interned at Boshart her senior year. That same year she was selected to participate in Civil Air Patrol’s National Blue Beret cadre at AirVenture in Oshkosh, Wisconsin.

“For two weeks I trained and worked the flight lines of one of the largest airshows in the world!”

This was the turning point that led Kristen to pursue a career in Aviation. She enrolled at Mohawk Valley Community College in Rome, New York at Griffiss International Airport.

“I realized that the aviation maintenance program would be a way for me to get my foot in the door of the aviation industry.”

Kristen heard Mike Rowe speak about the #mikeroweWORKS Work Ethic Scholarship Program in a radio interview. She applied and was granted a scholarship that covered nearly half her tuition.

In December 2017, Kristen will graduate MVCC. Maybe one day, she’ll build her very own Cessna.

If you or someone you know would like to pursue a skilled trade like Kristen, the mikeroweWORKS Work Ethic Scholarship Program can help you pay for your training. Apply NOW at mikeroweWORKS.org/scholarship But hurry, the program closes May 19th!