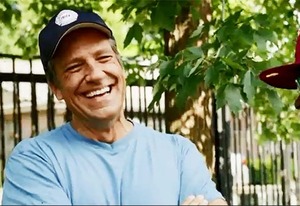 …For a New Reality at CNN

After an eight-season run on the Discovery Channel with Dirty Jobs, Mike Rowe is cleaning up his act and heading to CNN with a new series, Somebody’s Gotta Do It (premiering Wednesday at 9/8c). On each episode, Rowe seeks out regular folks to explore why they’re passionately committed to unusual jobs, avocations or causes — dirty or otherwise. His first hour takes him to Las Vegas where he suits up for an aquatic show and then to Independence, Missouri, to meet the curator of a hair museum. Somebody’s Gotta Do It is the latest entry in CNN’s growing roster of documentary-style programs, led by the top-rated Anthony Bourdain: Parts Unknown. Rowe says he had to make the cable news channel his new home base after learning his work was too real for today’s reality TV. He explained the move in a recent chat with The Biz.

TV Guide Magazine: You had a great run with Discovery. Why did you leave?
Mike Rowe: A couple of things happened. With respect to Dirty Jobs, we did 300 jobs and we shot in all 50 states. We were getting to the point where people wanted the show to get bigger, and honestly, I’m not interested in big shows. I didn’t want to do a special episode of Dirty Jobs with Gwyneth Paltrow or John Stamos in the sewer. I just didn’t. The show is about anonymous people in towns you’ve never heard of doing things you didn’t know existed. I didn’t want that to fundamentally change.

TV Guide Magazine: Was Discovery clamoring for that?
Rowe: It wasn’t just them. It was the industry. And that is the second point. I felt like I was in a place where nonfiction TV doesn’t mean what I thought it meant. Unscripted no longer means without a script. I looked at Duck Dynasty and Amish Mafia and Here Comes Honey Boo Boo and all the hit shows that were coming out of the nonfiction space — they had writers’ rooms. So, between that trend in nonfiction and the fact that I was in season eight of a show that was, frankly, physically killing me, I had what felt like a logical conclusion.

Read the complete article at tvguide.com.