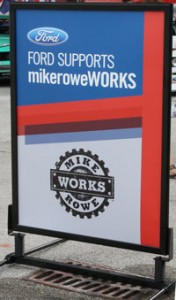 One of the really cruel things about television is the way it bends time, at least for the people who make it. A few weeks ago, for instance, the final episode of DJ aired for the current season. (Rather good, if I don’t say so myself.) In it, I found some part-time work for my erstwhile crew on scenic Mackinac Island and gleefully prepared for my first official hiatus in five years.

As I watched the episode at home, I became completely engrossed with the narrative arc and very excited at the prospect of having four months off forgetting, of course, that we filmed that particular episode last year and the four months in question had already passed. Which meant, of course, that production would be resuming forthwith and we’d be back in the dirt for the next seven months or so. Am I complaining? No, not really. Fact is Dirty Jobs should feel like a vacation compared to what’s been going on.

Mary Sullivan, a once sane and rational high-powered lawyer who made the mistake of taking my phone call five years ago, has accepted a dramatic demotion to President of mrW and resolved in her first official act to work me into the ground. Speeches, writing assignments, interviews…they’ve all smashed together in a frantic smear of activity, forcing me to live up to the name of this site. Happily, we’re having fun and have been “finding traction,” as the ad folk like to say, and doing what we can to push the whole thing forward mostly with the help of some absurdly dedicated individuals and the help of a few Ma and Pa companies.

Ford, for instance, has turned out to be a great partner in this endeavor promoting this site in a variety of venues and threatening to include mikeroweWORKS in the dashboard of next year’s trucks. Very cool. (They are also up 43% on the year, a statistic that I’m happy to take more than my fair share of credit for.) And all modesty aside, it’s kinda cool to see the mrW logo right next to the company that created the car and introduced mass assembly.

It seems the Ford/mrW hook-up caught the attention of another modest start-up – Motorola. You can read the article HERE Motorola is releasing some new phones in their iDen line that have been built to military specifications. In other words, they’re tough. After visiting mrW,

they approached me a few months ago and asked if I might be interested in speaking on their behalf. I said that would depend on whether they would incorporate mrW into their campaign. They said yes. Then I asked if they’d be willing to use some of the real people who have appeared with me on Dirty Jobs in the commercials we create. They agreed to that as well and I’m happy to report that you’ll be seeing some familiar faces from my dirty resume resurface in a new campaign for some sturdy phones that aren’t afraid of a little dirt. And yes, all modesty aside, it’s kinda cool to see the mrW logo next to the company that invented the modern cell phone.

Of course, I don’t need to become a spokesman for every company that wishes to support the site (I hope.) Cub Cadet, for instance, introduced me to a great non-profit they support called Green Care for Troops and that partnership has brought lots of traffic and awareness to mrW. I’m happy to say that we’re making progress on all fronts and, with luck, mrW will begin to appear alongside some more familiar logos in the very near future. Caterpillar has expressed a real interest in working together and Grainger is still in the picture, as well. Partnering with like-minded companies is the best way to fund this site and bring attention to the issues with which mrW is most concerned – the skills gap, the country’s infrastructure and the American Farmer.

Of course, with Dirty Jobs back in full swing, the schedule is busier than the numerous entries on my over-sized calendar can possibly hope to convey. We began with an Onion Farm last week, followed by a dirty tale about the important but largely misunderstood job of Date Palm Fertilizer.

Both good stories and a nice way to ease back into the season with a minor amount of discomfort. Last week though, brought me to Texas, where all that ended. This is Fiona:

Fiona is a lemur, and as you can see from her visage, she is annoyed.

The source of her annoyance, sadly, turned out to be me and I had the pleasure of shaking hands with Fiona by way of her mouth. Amazing what one small puncture wound from a primate can do, but here’s a look at the results several hours later.

Can you guess which hand was bitten?

Anyway, the whole episode was reminiscent of our little adventure in South Africa a few years ago, so I’ve no one to blame but myself. The ghost of Paddy the Monkey lives on, alive and well a few miles outside of Denton Texas. Go figure. When my hand returns to a normal size we’ll move onto whatever’s next, and I’ll continue to do what I can to keep you up to speed with all the news that’s fit to print here at mrW. Till then, thanks for stopping by, and never – never turn your back on a cranky primate…

32 thoughts on “Once More Unto the Breach Dear Friends, Once More!”