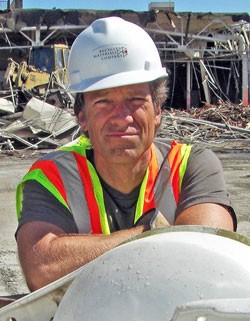 On every episode of the Discovery Channel TV series Dirty Jobs, host Mike Rowe digs in and gets to work at various messy, difficult, strange and sometimes disgusting tasks.

Viewers sometimes wince as he crushes up old toilets or gets up close and personal with dung beetles. He wields plungers, hammers, blowtorches and fishermen’s gaffs, and even operates the occasional forklift. He seems like the kind of guy you’d call to fix a leaky roof or a burst water pipe.

“Fixing things never came easily to me,” he says. “I didn’t get the gene.”

“That might be an understatement,” she says with a laugh. “There are a lot of things Mike does well, but he’s not very handy around the house. He could change a light bulb and probably change a fuse, but he was never all that interested in doing those things.”

Mom and son agree: Mike’s grandfather and father were the handy ones.

“My grandfather was a plumber, an electrician, a carpenter, a steamfitter, pipe fitter and a stonemason,” Rowe says. “He was the kind of guy who never read the instructions. He was the king of the neighborhood, the guy everybody came to if they had a problem or needed something fixed.”

Rowe, who lives in San Francisco when he isn’t on the road for Dirty Jobs, is single, but says, “I’ve been with the same, very understanding woman for 13 years.” He and his two younger brothers grew up on a farm in Baltimore County, Md., where the family had a modest parcel abutting several hundred acres of state-owned land. His parents were educators (Peggy taught English and special education; John taught eighth-  and ninth-grade history), but they also raised chickens, pigs and horses, and grew corn and tomatoes.

“I thought I was Huck Finn,” Rowe says.

His grandfather, Carl, built the family’s house and lived next door in his own home. Then, in his early 60s, Carl had a stroke. But true to form, he continued to work.

Despite his lack of affinity for most manual tasks, Rowe did his share of dirty jobs growing up, including a stint as a gravedigger and several summers working on his uncle’s fishing boat out of Reedville, Va.

“We fished for menhaden, a big, industrial fish,” he says. “You bring them up in nets and stack the deck with them. The stink is horrible. Back in port, you ring out the oil, which is used for lubricants, in a giant press. It’s a horrible job!”

As unlikely as it seems for a TV show host, a Ford automotive commercial pitchman and the narrator of other shows, including Deadliest Catch and Ghost Hunters, Rowe stuttered as a boy. But he also had a good singing voice. So, figuring that he couldn’t stutter and sing at the same time, he joined the school choir.

Later, Rowe auditioned for and won the part of Curly in the Overlea Senior High School production of Oklahoma!

“I was stuttering my way through the reading when Fred King, a brilliant teacher, stopped me and said, ‘Mikey, this character doesn’t stutter. I know you do and that’s cool, but he doesn’t. So just read it again without the stutter.’ So, when I started reading as somebody else, I didn’t stutter. A light bulb went off: I could choose not to do this!”

Cured of his stutter, Rowe pursued other acting and singing opportunities in and around Baltimore. His big break came a few years later when, with no formal training, he was hired to sing in the Baltimore Opera, where he performed for six years.

TV in the wee hours

While part of the opera company, he took a dare and successfully auditioned as a host for shopping channel QVC. For three years, he sold everything from karaoke machines and frog figurines to costume jewelry and nun dolls.

“QVC was a fabulous training ground,” Rowe says. “They hired anybody who could talk about a pencil for 10 minutes. That’s how I learned what live TV was about, even if it was from 3 to 6 a.m.”

“I used to set my alarm and get up in the middle of the night to watch him sell things he didn’t know anything about,” Peggy Rowe recalls. “It was wonderful!”

His QVC experience led to other roles, including Tylenol commercials and in-flight videos for American Airlines. Then, while hosting Evening Magazine, a local CBS-affiliated show in San Francisco, Rowe began profiling regular people with unusual jobs for a segment called “Somebody’s Gotta Do It.” The bits he intended as a tribute to his grandfather became the seeds that sprouted Dirty Jobs.

In 2005, Dirty Jobs debuted on the Discovery Channel, and Rowe has been climbing into sewers, picking up road kill, reaching into hot furnaces and milking camels ever since. Since the dirty jobs he has attempted (250 and counting) often are dangerous, it’s not surprising that Rowe has chalked up a few injuries along the way.

“Nothing major,” he says. “Just a few stitches and a cracked bone here and there. I did have my contact lenses fused to my eye from a blast furnace. I had to use tweezers to pull out the pieces of plastic.”

‘No script, no rehearsal’

“This is tough work for Mike, because besides being a full-time TV show host, he is actually doing the jobs,” says the show’s executive producer, Eddie Barbini.

To Rowe, being a real apprentice who truly attempts unfamiliar tasks is the most crucial element of the show.

“Basically, I’m paid to try,” Rowe says. “It’s so important for me not to cheat. There’s no script, no rehearsal or take 2.”

Ultimately, Rowe’s objective is to turn the spotlight back onto the workers who do the jobs for real.

“We’ve turned work into the enemy in this country,” Rowe says. “I didn’t start thinking about that until I started doing this job and working shoulder to shoulder with people who not only do stuff that most of us don’t want to do, but found a way to like it.

“We used to have American icons of work. Now we have American Idols. People want money, success, glamour and notoriety. And they want it now. What’s wrong with working for it?”