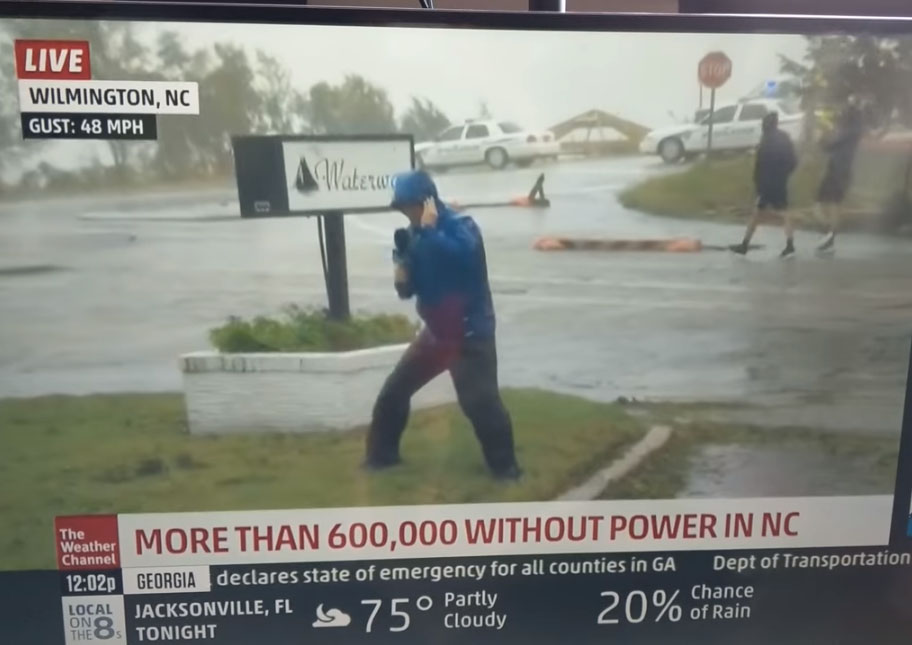 Typically, I don’t share videos that have already been viewed millions of times. Feels like old news. But old news is better than fake news, and here, we have an example of fake news so perfectly personified I can’t help but bring it to your attention.

Watch this clip. Ironically, it’s one of the most honest things I’ve seen in a long time. But not because The Weather Channel is committed to honesty. No, the truth here is accidental, and comes courtesy of the people in the background. Two guys, casually strolling through what the reporter would have us believe are gale force winds.

This is the problem with television today. No one can tell the difference between a commercial and a documentary. There’s no line between reality and non-fiction, news and entertainment, or in this case, a weather report and a skit on SNL. No one knows whom to trust anymore, because the landscape is littered with hosts and reporters and correspondents so desperate to hold our attention that they’ll do or say anything. And still, in the midst of so much pretense and pandering, they beg us to trust them! They literally beg us, with a level of earnestness that defies credulity. And then, they pretend. They perform. They act.

Do yourself a favor – if you’re looking for the truth, look behind the scenes. That’s where authenticity lives. That’s why I’ve always insisted on hiring a behind-the-scenes camera to document every show I’ve ever worked on. That’s why I’m insistent about incorporating that footage into whatever makes it on the air. Because it shows the truth, in a far more persuasive way than I could ever describe it.

Travis McGee, my favorite fictional character, once said, “Be wary of all earnestness.” He was right. Earnestness and truth have nothing to do with one another. Consider that the next time you see a news story or a weather report that’s preceded by a lurid graphic, dramatic music, and urgent sounding narration, and then ask yourself if the network is trying to inform you, or simply keep you from turning the channel. And remember this too – if a network or a reporter or the host of non-fiction TV show is asking for your trust, it’s only because they’re too lazy to earn it.

Be wary of all earnestness…